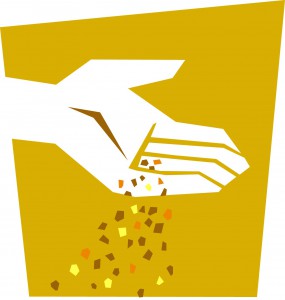 God builds his kingdom his way. Great persecution threatens the church. The early years of the church in Jerusalem were marked by growth (Acts 2:41, 47; 4:41; 5:14, and 6:7), despite opposition from the leaders of Israel. The martyrdom of Stephen triggers persecution, led by Saul, which Luke describes as “great.” The term, “dragged off” is used of a beast of prey and its victim. The believers flee Jerusalem, though the apostles remain there. You might expect the church to face a time of decline, a reversal of the growth it had seen.

But God scatters o that the Great Commission can be carried out. Remember the parting command Jesus gave the church in Acts 1:8? You can understand the tendency of the church to stay close to its birthplace, but now it is forced to expand. God had used scattering as judgment in the Old Testament. But this time the scattering, while indicating judgment on the persecutors rather than on the scattered, serves God’s purposes. Dennis Johnson writes: “In the Old Testament, scattering or dispersion was the judgement of God. The arrogant were scattered from Babel (Gen. 11:9). The Lord threatened to scatter his people from his land if they broke faith with him (Deut. 28:64). When they did, he kept his word, dispersing them among the nations (Ezek. 36:19). This dispersion of the church, however, was a sign of God’s judgement, not on those scattered but on the scatterers, on persecutors such as Saul whose zeal to destroy the church only served to spread the word about Jesus more broadly. Having given Israel’s capital city abundant opportunity to hear the message of the Messiah, God was taking the good news elsewhere.” (Let’s Study Acts, pp. 97-98). Without the scattering Christianity would haver remained a Jewish sect, likely to disappear in 70 A.D. But now the ascended Lord is pushing his people to go to Judea, Samaria, and beyond. What Saul and Satan intend as the death-blow to the church, is actually her Lord preserving her.

God is sovereign, but you are responsible, so spread the good news! You are God’s people, so speak his good news. The verb translated preached the Word could be rendered, spoke as good news the Word. While sometimes used of preaching (it is the word from which we get evangelist) it can have a more general meaning. Here is it not identical with what Philip does in v. 5. Notice also that it is the scattered believers generally, not the Apostles, who remained at Jerusalem, who are speaking this news. While you should never diminish the office of preaching, God ordains that the work of the church is carried out by his people. Those entrusted with preaching have the responsibility of equipping the saints, Ephesians 4:11-12. Speak God’s good news to those around you. You, like Israel, are a nation of priests, 1 Peter 2:9.

When the church is doing her work, rejoice! Some of the believers, including Philip (Acts 6:5) went to Samaria. Culturally and spiritually the journey was far longer than geographically. The Samaritans, despised by Israelites as half-breeds who had corrupted the true religion, began to receive the gospel. Jesus, during his earthly ministry, had touched the lives of a few Samaritans. But, in sending the twelve to the lost house of Israel, they were specifically to avoid Samaritan towns, Matthew 10:5. Now, however, that is one of the places to which God’s people have to go. The semi-pagan darkness of Samaria is broken as evil spirits are driven out, the sick are healed, and the kingdom of God is evident. The result is great joy, replacing the fear and superstition of the city. But there must have been even greater joy in heaven over sinners repenting! Similar joy should mark the result of your faithful speaking of the good news.

The God who controlled even the fury of Saul’s persecution of the church can and does use even the difficult times in your life and the challenging times in the life of his church to bring about the joy of sinners repenting and growing in the kingdom through the faithful witness of his people.