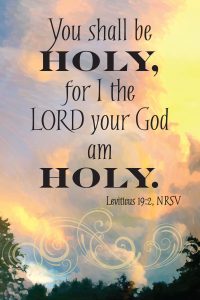 Ascribe holiness to God. Holiness separates God from his creation. Grasp the magnificence, the glory of the Lord, as seen in Isaiah’s vision. God’s majesty is so great that his sinless creatures, the seraphs, cover their faces in his presence and cry, holy, holy, holy! The New Testament sounds the same note, Revelation 4:6-8. One of the reasons we struggle with personal holiness is that we don’t see as clearly as we should the transcendence of God. We treat him as the one who makes us feel good, and who gives us what we think we need. “The basic idea which the word ‘holy’ expresses is that of separation or separateness. When God is declared to be ‘holy’, the thought is of all that separates Him and sets Him apart and makes Him different from His creatures. . . . [M]an, because of his weakness as a creature and his defilement as a sinful creature, must learn to humble himself and be reverent before God.” (J. I. Packer, Knowing God, p. 183). END_OF_DOCUMENT_TOKEN_TO_BE_REPLACED 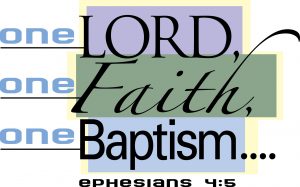 In the Nicene Creed we confess that we believe in one church. Paul, in Ephesians 4:1-6 both assures you of the unity of the church and challenges you to display that unity. The unity of the church includes a lot of diversity. Sometimes the unity seems to vanish in diversity. Yet, if God’s Word tells you to pursue unity, if Jesus prayed for unity in his high priestly prayer, you need to pay attention! 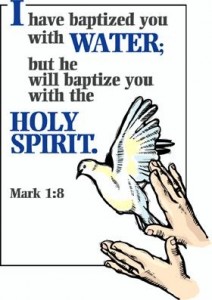 Where does the church as a body get the energy to serve God? Where do you as part of that body find the power you need to resist temptation and grow in obedience? Are you empty . . . or are you full of the power of the Spirit? The Holy Spirit is where Paul points you in 1 Corinthians 12:13.

Live as the body of Christ baptized in the Spirit. The church is where the Spirit works. The Old Testament church longed for the fullness of the Spirit, Ezekiel 36:25-27. Note the use of the purification, washing, baptism imagery. The Spirit was not absent from Old Testament believers (Psalm 51:11), but the new covenant, the Day of the Lord, the time of the Messiah is anticipated as involving a dramatically new, rich pouring out of the Spirit. John the Baptist contrasted his ministry with the coming ministry of Christ in terms of baptism: “I baptize with water, he will baptize with the Holy Spirit and with fire.” The Spirit who had been given to Jesus for his earthly ministry is then poured out on the church in power as a blessing, Luke 24, Acts 1,2. Recognize that the Spirit is the gift of the Father and the Son to the church. He is the gift poured out at Pentecost, he is the One with whom the church is baptized. “. . . all that Paul says about the activity of the Spirit is rooted in the more basic reality that the church, as the body of Christ, is the locus, the place where the Spirit is present in his diverse working.” (Richard B. Gaffin, Jr., Perspectives on Pentecost, p. 28). END_OF_DOCUMENT_TOKEN_TO_BE_REPLACED 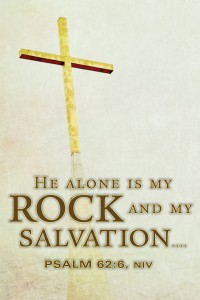 The King builds his church. The King has come, establishing his kingdom. Matthew’s Gospel proclaims the coming of the true King of Israel. The Old Testament describes the establishment of God’s kingdom, and anticipates the fullness of it. It looks forward to the trees rejoicing, the nations sounding God’s praise, the islands and deserts proclaiming God’s grace (Isaiah 42). The parables focus on the kingdom. The miracles are not just “wow!” events, but they put in visible form the reality of the blessing proclaimed verbally in the teaching and preaching of the kingdom. The kingdom is present because the King himself is there. Jesus takes his disciples aside and asks them who they believe he is. Peter properly confesses that Jesus is the glorious Messianic Son of Man, the Christ, but also sees that he is the Son of the living God. That is a confession that was worked in Peter by the Father in heaven. “The Church, in short, is a present manifestation of the Kingdom of God and in her the Kingdom’s transforming power operates and from her its life and blessedness flows to form an oasis in the desert of this world’s sin and misery, darkness and death, to which the thirsty traveler may come and drink deeply at the well-springs of salvation.” (Raymond O. Zorn, Church and Kingdom, p.81). END_OF_DOCUMENT_TOKEN_TO_BE_REPLACED 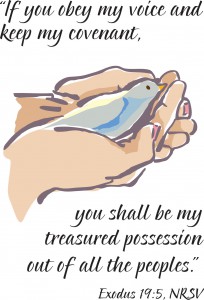 You are God’s people. You are his people because he chose you. Hosea had warned Judah that because of their sins they were becoming Lo Ammi (not my people), Hosea 1:9. That sin culminated in the rejection of the Cornerstone, 1 Peter 2:4,8. Hosea foretold the coming Day of the Lord, in which the people would become Ammi (my people) once again, Hosea 2:23. Peter tells you that you have become God’s people, God’s “folk,” in Jesus Christ. But the idea of the people of God is older than Hosea. In a real sense you can trace it back to the Garden of Eden. It becomes explicit in the promise to Abraham, that the Lord will make him into a great nation. That unfolds as the Lord delivers his descendants, a slave people, from Egypt, and covenants with them at Sinai to be their God and they to be his people. As we will see next week, in the New Testament this people takes on a new form, it is called the church, and it is connected directly to the Messiah promised in the Old Testament, the Lord Jesus Christ. The term “church” ecclesia, [from which we get our word, ecclesiastic], can mean any assembly, Acts 19:41, but refers to the body of believers, both on the local and broader levels, Acts 8:1; 2:41; 4:4; 6:7; 8:3—note the geographic breadth of Saul’s persecution. Church applies to God’s people on the local, regional, national, and even universal level. It’s roots lie in the Old Testament assembly (qahal) of God’s people in his presence, Numbers 14:5; see Exodus 19. You have come to the heavenly assembly, Hebrews 12:22-24. You belong to God because he has chosen you, Ephesians 1:3-6; Isaiah 43:10,20,21; 44:1,2. END_OF_DOCUMENT_TOKEN_TO_BE_REPLACED