Joy in the Morning 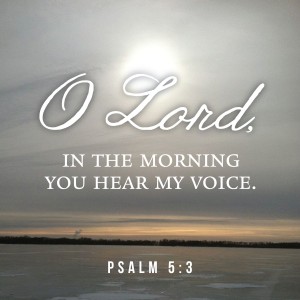 Words can be powerful weapons, as David recognizes in Psalm 5.

Pray for deliverance from evil speaking. The arrogant cannot stand in God’s presence. The Psalm is an urgent cry for help. When you think of David’s enemies, you might focus on Goliath, Philistine armies, and other violent enemies. But the danger of which David speaks is largely the power of words: “bloodthirsty” in verse 5 parallels “deceit.” The Psalms are, as a friend commented this week, pan-historical. These sinners cannot stand in the presence of a holy God. God does judge, and the ungodly lack permanence. David is echoing the warning of Psalm 1:4-5. The Lord abhors sins of the tongue.

Beware of sins of the tongue. Notice where the New Testament uses a quote from this Psalm. Romans 1 describes the sinfulness of the Gentiles, those who did not have the law of God, but nevertheless were accountable because the invisible God reveals himself in the visible creation. Romans 2 points out that Israel, the covenant people who prided themselves on having the law, were also guilty of breaking that law. Romans 3 concludes that everyone, Jew and Gentile alike, everyone is a sinner and thus under God’s condemnation. In a series of quotes from Old Testament passages, Paul in Romans 3 quotes Psalm 5:9, with its graphic description of the sin of speech, comparing the throat to an open grave. Feel the pinch of that text as you realize that Paul is not just describing sinners out there somewhere—rather, he addresses his readers, including you and me. Appreciate the power of words, both to tear down and destroy, as well as to be a barometer of the state of the heart. Paul has to show you the depth of your sin and corruption so that he can point you outside of yourself to the righteousness of another, a divine righteousness that you find in Christ alone. “Closely connected with these warnings against what I have called ‘connivance’ are the protests of the Psalter against other sins of the tongue. I think that when I began to read it these surprised me a little; I had half expected that in a simpler and more violent age when more evil was done with the knife, the big stick, and the firebrand, less would be done by talk. But in reality the Psalmists mention hardly any kind of evil more often than this one, which the most civilized societies share. ‘Their throat is an open sepulcher, they flatter’ (5, 10), ‘under his tongue is ungodliness and vanity’, or ‘perjury’ . . . (10, 7), ‘deceitful lips’ (12, 3), ‘lying lips’ (31, 20), ‘words full of deceit’ (36, 3), the ‘whispering’ of evil men (41, 2), cruel lies that ‘cut like a razor’ (52, 3), talk that sounds ‘smooth as oil’ and will wound like a sword (55, 22), pitiless jeering (102, 8). It is all over the Psalter. One almost hears the incessant whispering, tattling, lying, scolding, flattery, and circulation of rumours. No historical readjustments are here required, we are in the world we know. We even detect in that muttering and wheedling chorus voices which are familiar. One of them may be too familiar for recognition.” (C. S. Lewis, Reflections on the Psalms, pages 64-65).

But, by God’s grace, you can use that tongue for good. Cry to your King. Pray to God in the morning. Psalm 4 was an evening prayer, and Psalm 5 has the dawn breaking with the Psalmist still crying urgently to the Lord. The urgency, even lament, does resolve itself into joy by the end of the Psalm. One of the reasons for the joy is the conviction that God is truly the King. He is holy and he is sovereign. He will not allow the triumph of evil speech and evil actions in his kingdom. “As King, God cannot permit evil to triumph in His kingdom, and He cannot but defend him, who, as righteous, can address Him as his King. This address reminds God candidly, as only a believer can, of His obligation to help: it is, at the same time, an exhortation to the Psalmist himself, to trust in Divine help.” (E. W. Hengstenberg, Commentary on the Psalms, at Psalm 5:2). That comfort is yours only as you, with David, can call the Lord “my King.” See Jesus as your sovereign redeemer, not just as someone who helps you with whatever problems you feel you have at the moment.

Come into God’s holy temple. Where do you find relief from the attack of the evil one, the one who is behind the treacherous tongues? In the house of the Lord. In his temple. God’s redeemed people are a worshiping community. Admission is only by God’s great grace. David is confident that the Lord defends the righteous, those are the targets of rebellion against God and his people. But he is not teaching a works righteousness. He understands grace.

“Rejoice!” That’s the note on which the Psalm closes. The urgent cry with which the Psalm begins contains a note of expectation. The morning prayer results in the joy of assurance for those who take refuge in God. United with your Savior you have confidence. You know that because he is your King the threats against you will ultimately come to nothing.

Read Psalm 5 in light of James 3 and Romans 3. Words can be damaging. Don’t let your throat become an open grave. Rather, use you tongue to cry out to the Lord who gave himself for you so that you can enter his temple, and so that your tongue can be used to build up those around you and to sing his praises.