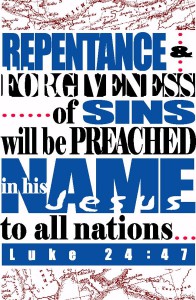 You may be old enough to remember when speeches played an important part in elections. They seem to have been replaced by carefully scripted and produced sound bites. The good news of the work of the Lord Jesus Christ spread through special kinds of speeches: sermons. Acts 13:13-52 contains the first sermon of Paul summarized by Luke (though the apostle had done much teaching and preaching before this). It resembles the sermon of Peter in Acts 2 and that of Stephen in Acts 7. Paul has traveled to the mainland of Asia Minor and now preaches in a synagogue in Antioch of Pisidia. The message, starting in Acts 13:16, has three parts.

Listen to what God has done. This sermon introduces and encapsulates Paul’s preaching. Although the setting is a synagogue, the congregation includes both proselytes and God-fearers and well as Jews. Appreciate the layers involved: Paul is preaching to a particular congregation, Luke summarizes the message in detail for Theophilus and other initial readers, and the Holy Spirit includes it in Scripture for you.

Understand the sweep of redemptive history. As Paul highlights the events of covenant history preparing for the Messiah, he recites what is almost an Old Testament creed. In almost every event God is the subject. Salvation is not because of who are or what you do, but is God’s work.

Understand the message of salvation. This history all leads to a person, the coming of the Lord Jesus Christ. Unrecognized by Israel and condemned by her leaders, he was executed. As Peter had done in his message in Acts 2, Paul contrasts the verdict of wicked men with that of the Father, who raised him from the dead. Both messages cite Psalm 16 to show what the resurrection means and refer to David’s death and burial to show that he was writing of One greater than himself. In verses 32-33 Paul sees Psalm 2 as being fulfilled in the resurrection of Jesus. The eternal Son earns an additional title as “Son” as he completes his messianic work and rises from the dead. Preaching, then and now, the message of salvation, must focus on Christ. “The preaching that builds people toward spiritual maturity does not take them beyond Christ. Rather, it takes them more deeply into Christ, so that their thoughts, attitudes, values, desires, reactions, words, and behavior are transformed by their death with Christ to sin and their resurrection with Christ to life and righteousness.” (Dennis E. Johnson, The Message of Acts in Redemptive History, p. 161).

When you understand who Jesus is and what he came to do, believe. At the same time, beware! What the ceremonies of the law of Moses could not do (see Hebrews 10:4). Your justification grows out of the death of Christ, but especially his resurrection. The resurrection is the Father’s verdict on the Son who became sin for his people. It is also the verdict for all who are united to him by faith. The good news is that those who believe in him are saved. It is not enough to know about Jesus. You need to be trust in him, resting on what he has done for you. The ceremonial cleansings did not purify the heart and life. But being raised with Christ makes you a new creation, living far differently than your earlier, self-centered existence. Salvation is not just a one-time experience. It is continuing in the grace of God, verse 43.

With the invitation to believe goes a word of warning. Paul (verse 41) quotes Habakkuk 1:5. The surprising judgment on the covenant people in the prophet’s day was to be the Babylonian invasion, captivity, and destruction of the temple. Paul speaks to the covenant people in his day. Judgment is coming. Whether it is the destruction of Jerusalem in the short term, or the final Day, judgment is coming. The covenant continues. Those who reject the Messiah fall under judgment. But those whom God has appointed for eternal life (verse 48) believe. The light shines, not just on Israel, but to the ends of the earth as well.

The good news is that God has given you his Son as the great deliverer. Trust him!