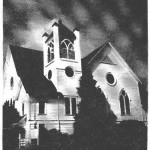 Built in 1892 by First Baptist Church, a Conservative Baptist congregation, the building at 619 E. Sheridan St., Newberg, was purchased by Trinity in 1965 and used until 1979. Due to its deteriorating condition the building was taken down in 1980.

Newberg, Oregon, lies nestled on the Willamette River at the mouth of the Chehalem Valley. Apple, cherry, and filbert orchards as well as vineyards cling to the hillsides, while wheat and berries flourish in the rich bottom soil. Newberg has grown from a tiny farm community to a town with a college and light industry. Many of its residents are employed in Portland or its suburbs. The roots of the Orthodox Presbyterian Church here also reach into Portland.

In September 1961 a Bible study led by the Rev. Albert G. Edwards, III, pastor of First Orthodox Presbyterian Church, Portland, was begun in the home of Marinus and Catherine Vanden Hoek in Newberg. The Vanden Hoeks, who farmed just outside the town, had spent several years looking for a Reformed church that was faithful to the Word of God. A radio ad for evangelistic services in the First Orthodox Presbyterian Church had drawn the Vanden Hoeks to the Portland congregation. On March 4, 1962, the Bible study expanded to Sunday worship services led by Mr. Edwards, and held in facilities rented from the Seventh-Day Adventists at Edwards Street and Second Avenue. The growing work soon attracted Mrs. Gay Buckley and the Marcus Becktell, Fenn Bourland, Laurence Bourland, and Richard Hill families, among others. 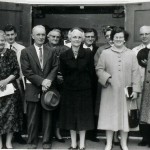 On March 12, 1964, the group was officially organized as Trinity Presbyterian Church of the Orthodox Presbyterian Church, and called the Rev. Herbert W. Butt as its first pastor. Membership at the end of 1964 stood at thirty-seven communicants and twenty covenant children.

1965 was a year of transition for the church. Because of a change in his theological position, Mr. Butt resigned from the pastorate and from the Orthodox Presbyterian ministry. The congregation suffered a decline in membership. On November 7, 1965, the church held its first service in the building at 619 E. Sheridan Street. By the end of the year the church had called the Rev. Robert W. Newsom, who served as pastor from March 8, 1966 until December 31, 1972. 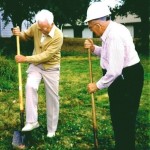 Arthur G. Ames served as pastor from May 1973 through October 1976. The present pastor, John W. Mahaffy, was installed on May 20, 1977. Through much of its first quarter century the session consisted of the pastor and ruling elders Laurence F. Bourland and Marinus Vanden Hoek.

When the building the church had purchased in 1965 deteriorated to the point that it had to be demolished, the church again met in rented facilities, first the Seventh Day Adventist building, and then in a small building (originally built as a blacksmith shop) used as a senior citizens club. Eventually, over a three year period the church was able to construct the building (built pay-as-you-go) on its present location, Columbia Drive and N. College St. The first worship service in the building was held on December 24, 1995. In the late 1990’s the church, which had been predominately older members, saw the addition of a number of families with young children. 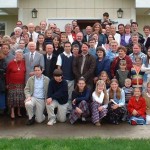 The growth in numbers was accompanied by the ordination of additional ruling elders. Although most of the members live in Newberg, a number of families travel substantial distances to worship with the church. The church continues to seek to serve the community, including patients at Providence Newberg Medical Center, and students at George Fox University. By God’s grace, orchards and vineyards are not the only fruit seen in the Newberg area.

Click on thumbnail images to view in larger size.