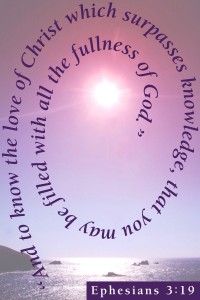 Have you met someone who has more enthusiasm for an area in which you have some competence than he has skill or knowledge?  The zeal without knowledge that Paul describes in Romans 10:1-4 is not just annoying–it has eternal consequences.

Paul will contrast ignorant zeal with zeal that is according to knowledge.  But he puts that contrast in the setting of his passionate, zealous prayer for his fellow countrymen.  Those were not empty words, but were borne out by his willingness to suffer for the sake of bringing the good news of Jesus, the Messiah, to them.  How much effort do you put into praying for family members who do not know the Lord?  How much persistent effort goes into your prayer, and into the actions that flow out of your prayers?

Don’t allow the chapter break between Romans 9 and 10 to disturb the continuity of the thought.  Paul affirms that God foreordains or elects his people.  But that in no way hinders his fervent prayer or his work of bringing the good news as widely as possible.  Never use the sovereignty of God as an excuse for failing to be faithful in making his name known.

Paul does give credit to his fellow Israelites for their zeal.  As a Pharisee, he had displayed a similar zeal, see Galatians 1:13,14 and Philippians 3:4-6.  You likely observe a similar enthusiasm in representatives of cults or other religions.  Like Paul, acknowledge their efforts, but point them to God’s Word.  John Calvin comments on this passage in Romans: “Away then with these vain evasions as to good intention; if we seek God sincerely, let us follow the way by which alone we can come to him.  For it is better, as Augustine says, even to go limping in the right way than to run with all our might out of the way. If we would be really religious, let us remember that . . . true religion is alone that which is connected with the Word of God.”

When Paul says that his fellow countrymen seek to establish their own righteousness (Romans 10:3), he echoes the language that God used in Genesis 17 as he established his covenant with his people.  Fellowship and union with God is the goal, but it can never be achieved by your own efforts, no matter how zealous or however well-intentioned.

Rather, the hope that Paul holds out for his countrymen, for the hearers of this letter when it reached Rome, and for you, is the righteousness that God provides.  Zeal that is according to knowledge does not insist on its own way.  It shuns the relativism of our culture that affirms whatever you find meaningful.  Rather, it is a zeal that submits to the righteousness of God.

Paul’s fellow Israelites made their efforts at keeping God’s law a way to try to be righteous before God.  Paul tells you that Christ has one relationship to that idea.  He terminates it.  Or, at least he terminates it for everyone who believes.

Knowledge as the Apostle uses it here, is a richer concept than the way we often use the term.  It involves understanding the character of God, not just assuming that he can be twisted into something that you find comfortable.  Knowledge includes trust, the willingness of a child to face anything knowing that she has hold of her father’s hand.

Contrast two kinds zeal.  One is energetic, but ultimately culpably ignorant of God’s way.  It replaces the covenant relationship God has set up with the establishment of self-righteousness.  The other kind of zeal looks to the righteousness that comes from God.  It focuses on the One whom God has made “our wisdom and our righteousness and sanctification and redemption” (1 Corinthians 1:30).  As you entrust yourself to him, overflow with an ever growing zeal to make his name honored in your words and life.