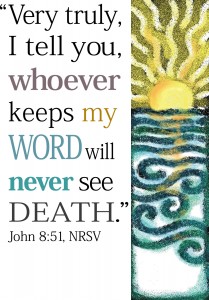 “She certainly has her mother’s eyes!” “He looks just like his daddy!” Not only do you hear those comments about a baby, but as the child grows you begin to see reflections of the parents’ conduct acted out by the child. We learn from our parents. Jesus makes a sobering statement in John 8:42-47: we are by nature imitators of a lying, murderous father, the devil. Even more sobering, Jesus’ words are addressed to “those who had believed in him” (John 8:31).

The devil is a liar and murderer. Genesis 3 recounts how Satan, having taken the form of a serpent, tempted Adam and Eve. He lied, denying that the consequence of eating would be the death that God had threatened. In enticing them to sin, he brought death into the world.

Jesus wants you to know how deceptive Satan is, how he lies, how he tries to make you think that the consequences of sin don’t really apply to you. Children, and adults as well, need to recognize that thoughts like, “Nobody will ever find out,” or “Everybody is doing it,” or “Just trying this once is not a big deal,” are lies from Satan. God’s standard of right and wrong, of black and white, is replaced by fifty shades of grey. Understand that Satan is trying to make you focus on yourself and your pleasure. Just as he told Eve, you will not surely die, he tries to make you ignore the consequences of sin. But sin is deadly! You have to know that. See its danger. Avoid it.

You live as a child of the devil when you do what Satan did. Jesus’ original hearers boasted of being descendants of Abraham, free from slavery. But because they did not act in faith, believing in the one in whom Abraham believed, but instead sought to kill him, Jesus warned them that they are children of the devil. They were doing his work. That is true, even though, as Jesus recognized, they were physical descendants of Abraham. They were the covenant people. But they did not remain in Jesus. Their “belief” was temporary and shallow.

If you are going to understand the greatness of the work of Jesus, you must realize that by nature you are a child of the devil. You entered this world dead in sin, as Paul points out in Ephesians 2.

The good news in this passage is that in Christ you no longer continue to be a child of the devil. Satan tempted Adam, and Adam sinned, not only for himself, but for all those whom he represented, all those who descend from him, as the Shorter Catechism puts it, by ordinary generation. Now the other representative is speaking, and he is the sinless One. Listen to his challenge, “Can any of you prove me guilty of sin?” (verse 46). In contrast with the father of lies is the one who not only speaks the truth, but is the truth. Here is the sinless One who knows he will be lifted up, v. 28, who will make atonement for all those he represents.

His people are those who not only express trust in him, but who remain in him. As you remain in Jesus, not only are yours sins forgiven, but you begin to do the will of the true Father, the God and Father of your Savior. You have been rescued from the kingdom of darkness and brought into the kingdom of the Son whom God loves, Colossians 1:13.

In Jesus you are a new creation, as Paul puts it in 2 Corinthians 5:17. That means that you no longer can live the self-centered life to which Satan tries to lure you. You can, you must, you do begin to live as the new creation which you are. G. K. Beale comments: “If believers are merely like a new creation, they might get away with thinking that they really do not have to live and think radically as new creatures. But if Christians are the actual beginning of the end-time new creation, they must act the way new creatures act, which is to live for Christ by viewing all of reality from the perspective of his word and not from the viewpoint of the world. Just as a butterfly cannot return to its cocoon and act like a caterpillar again, so all who are part of the beginning fulfillment of the prophesied new creation in Christ cannot return to being unbelievers and, therefore, will perhaps slowly but surely act like people who have begun to be part of the new creation. It is on the basis that Christians are a new creation that Paul can issue commands to them. That is, they have the power to obey the commands by virtue of the new-creational ability inherent in them.” G. K. Beale, A New Testament Biblical Theology, p. 303.

If you are a new creation the superficiality of Satan’s lures become more apparent. The rebellion and disobedience he encourages becomes distasteful. The devil’s lies begin to have a hollow sound. His falsehoods are replaced by the gentle commands of your Savior. The love of self is overcome by love for and trust in the one who is the great I Am!

You are no longer a child of the devil. Instead you are an adopted son or daughter of the God and Father of Jesus Christ, to whom you are united by faith. Live as his child!