Words and the Word

I recently wrote this for our local paper, the Newberg Graphic. 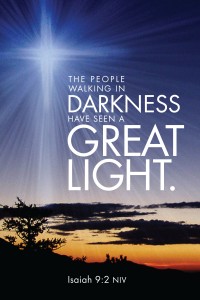 “Where should I begin?” you ask as you begin a story.  Obviously, “At the beginning!”  The beginning is where the beloved disciple of Jesus, starts when he writes his account of the life of Jesus, the Gospel of John.

In his first sentence John writes: “In the beginning was the Word.”  Prior to the creation of the universe, when only God existed, the Word was.  Soon you realize that John uses “the Word” to refer to Jesus.  He echoes the opening of the Book of Genesis: “In the beginning God created the heavens and the earth.”  We need a new beginning because mankind’s sin has alienated God from us and has corrupted our world.

The Word is not an abstract principle or a philosophical construct as Greek philosophers suggested, but a person.  That person is not an emanation from God, but is God himself, for John says, “The Word was with God and the Word was God.”  All that God is, the Word is!  You may find that idea mind-boggling.  For John, who shared the confession, “Hear, O Israel, the Lord our God, the Lord is one,” the concept was no less amazing and mysterious.  Yet, if you are going to understand the Jesus about whom John writes, you have to start with who he claims to be – God himself.

The most fundamental distinction one can make is between Creator and creature.  The Word is on the Creator side.  “All things” (nothing is excluded from that creative sweep) “were made through him.”  You may be told that you are the product of random chance, living in a meaningless universe.  John counters with the comforting truth that you were made by the living God.

Reflecting on the Baby who was laid in the manger, G. K. Chesterton got it right in his poem, “The Wise Men”: “The Child that was ere worlds begun . . . / The Child that played with moon and sun / Is playing with a little hay.”  Chesterton believed the additional point John makes: the Word became flesh.  That assertion was shocking to some of John’s readers and was dismissed as foolishness by others.  In our post-modern thinking we may discard John’s claim with the comment, “Well, if it works for you, that’s fine.”  The element of John’s Gospel we find scandalous is that our separation from God is so serious that it cannot be bridged by the best efforts we make at reaching out to God.  Rather, our darkness is so deep that it can be changed only by the new beginning of God becoming flesh.

John introduces you to the Word in a way that is still profoundly counter-cultural.  In our world of images and sound bites communication takes place in tweets.  John does not paint a picture of Jesus or give you a set of bullet points about him.  He does not instant message about the Word.  Rather, he gives you a whole book full of words, words that describe who this Jesus is, words that call you to trust in him.  You could do worse than take time in the days ahead to read the words John wrote about Jesus.  He wrote so that you might have life.