Why the Root of Jesse? 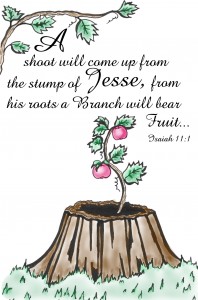 Joseph had to travel to Bethlehem to register, according to Luke 2, because he was of the line of David. Did he reflect on his ancestry as he did so? Why is it so important that the Messiah be identified in Isaiah 11:10 (and elsewhere) as the descendant of Jesse and David?

Trust the Root of Jesse. God has provided a Shoot from Jesse’s stump. Isaiah 10:43-44 had described God’s judgment in terms of his felling the forests of Assyria. Judah, too was cut down, but from the stump a shoot would grow, see Isaiah 11:1; 4:2; 53:2; Zechariah 3:8; 6:12. The root of Jesse was not dead. God would not forget his covenantal promise to David in 2 Samuel 7. A descriptive name takes on the status of Messianic title. It takes the eye of faith to recognize the righteous Branch. You see God’s sovereignty in the Servant passages of Isaiah 40-48. As Isaiah prophesies and celebrates the ending of Israel’s (yet future) exile, he describes Cyrus, by name 100 years before his time, as God’s servant, Isaiah 45:1ff. But in a deeper sense, Israel is God’s servant, Isaiah 43:1; 44:1. Yet neither the people of Israel nor the king of Persia are fully qualified to be the Servant of the Lord. Thus Isaiah sings of a greater Servant, Isaiah 42:1-9 and Isaiah 52:13—53:12. This Branch is none less than the Son of God. The eternal Son was sent by the Father. He did not begin to be at Christmas. He is Son from all eternity. He is Creator, John 1:1-3. He is fully God, Romans 9:5. He was born of a woman. God sent his own Son. The persons of the Trinity cooperate in the incarnation. His birth was like your birth, like any human birth. “The incarnation is the central fact of history and of the church’s confession: ‘Great indeed, we confess, is the mystery of godliness. He was manifested in the flesh’ (1 Tim. 3:16)). Even before the the Fall, God eternally decided that the Son should assume a human nature, consisting of a body and soul. As the eternal Son who has no beginning and no end, he has always known that he would become the incarnate one (i.e. ‘the enfleshed one’).” (Mark Jones, Knowing Christ, p. 26).

Enter his kingdom of wisdom, righteousness, and peace. His righteousness, justice, and faithfulness characterize his rule and his kingdom, vv.3-5. He strikes his enemy with the rod of his mouth. The belt of righteousness, v.5, is a metaphor taken from wrestling. The result of this righteous rule is peace, vv.6-9. Isaiah describes the peace of the Messianic kingdom by picturing the predators and domesticated animals lying side-by-side. The peace was there in an initial sense as Judah returned from captivity. But it became more explicit as the angels outside Bethlehem cried, “Glory to God, and on earth, peace. . . .” It is there in measure wherever the kingdom of God rules in the hearts and lives of men. That peace should be there in the covenant homes of this church, in your relationship with your husband, your wife, your parents, your children. It should be there in your dealings with those around you, especially your fellow believers. (Read Ken Sande’s The Peacemaker for help.) But its fullness comes when the kingdom is consummated at the return of the Messiah.

Rally to the banner. The Lord draws his people to himself. Normally you look for roots underground. But this one serves as a banner, a military ensign. It calls you to rally around it. The Root of Jesse can serve as a banner only by being lifted up. This may have been one of the passages which form the backdrop for Jesus’ words in Jn. 3:14; 12:32. The people had not yet been scattered (with some exceptions) in Isaiah’s day. Assyria was the primary enemy which would carry the people into exile, but Egypt and others are mentioned as well. He has in view, on an initial level, the return for God’s people from exile. More is involved here than just Israel returning to the Lord. The real fulfillment looks forward to the incarnation, the public ministry of Christ, his death and resurrection, Pentecost, the proclaiming of the gospel, and the response of the Gentiles. This is God’s people gathering to serve their King.

Join the new Exodus. The sovereign Lord stretches out his arm for the second time. Once it had been extended to bring the plagues on Egypt and to deliver his people. Now it is extended with the same power, but this time to bring restoration to his own. The miracles of the first Exodus are repeated. The tongue of the Red Sea and the Euphrates River would be dried up to allow his people free return, v.15. The track from Assyria would become a highway, v.16. But this banner is raised, not only for the sons of Abraham after the flesh, but for the nations. God’s coming in salvation is news too great to be confined to one people. “Israel got their king — in fact, lots of kings. They were all measured by whether they did what was right in the eyes of God. However, even the best ultimately failed. None of them was able to rule and subdue the earth. But another king was to come. The imperfect/divided line descending from David was to yield an eternal throne (Psa. 89). This was to come in Christ, the perfect king. Where he was present, his kingdom existed, in anticipation of that which is to come in its perfection (Matt. 6).” (Mark Jones, Knowing Christ, p. 226). Your coming to Christ in faith sets you on this highway to Jerusalem. Only now, the destination is not a city in the Middle East, but the heavenly Jerusalem. To you, the church of Jesus Christ, has been given the task of proclaiming the gospel so that many more may join in that great pilgrimage.

The lowly root of Jesse becomes the ensign to which the nations stream. He invites you to rally to that banner, and, through the Spirit of counsel and power, to lift it so that many more will find refuge in him.