Who Listens When You Weep? 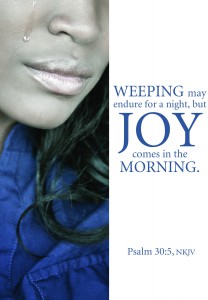 We are told, both by politicians and by some TV preachers, that we ought to feel good about ourselves. But according to God’s Word, there are times when we don’t feel good, times when weeping is an appropriate response. Psalm 6 is one of those instances.

Ask, “How long, O Lord?” Pray in the midst of suffering. In this penitential psalm David is conscious that he is enduring suffering as the result of God’s disfavor to him. The suffering is so severe that cries out, fearful that he will not survive. Be thankful that God does chastize his children, Hebrews 12:4-11. We need to look critically at ourselves as we go through suffering, asking if we have offended our God. “Repentance is a practical thing. It is not enough to bemoan the desecration of the temple of the heart, we must scourge out the buyers and sellers, and overturn the tables of the money changers. . . . A pardoned sinner will hate the sins which cost the Saviour his blood. Grace and sin are quarrelsome neighbours, and one or the other must go to the wall. . . . Weeping is the eloquence of sorrow. . . . . My God, I will ‘weep’ when I cannot plead, for thou hearest the voice of my weeping.” (C. H. Spurgeon, The Treasury of David, on Psalm 6:8). With David, recognize the justice of God’s wrath and anger. A God without those characteristics is far less than the God of Scripture. As you experience chastisement, cry out to God. Recognize that sin is an offense against the nature and character of God.

Pour out your heart in tears. Cry out to God–but there comes a time when there are no more words. Even then, David weeps, knowing that the Lord hears the voice of his crying. Jesus Christ, great David’s greater Son, cried out to his Father. This was not the agony of personal repentance, but it was a cry from the depths of suffering, for it came from One who had become sin for us, see Hebrews 5:7-10. “How long?” continues to be the cry of those who are united with him in his sufferings, even of saints in heaven, Revelation 6:9-11. The weeping of which the Psalm speaks may be due to chastisement for sin. It also may simply be grief over the suffering, pain, and loss that comes to us in this sin-cursed world. Don’t assume that you must locate a specific sin in your life as you go through suffering. David’s reference to the grave does not deny God’s sovereignty (some of the Psalms will explicitly recognize God’s power to deliver even from there), but rather laments life as too short and the grave as that which silences the worship and praise of men. Even for the believer, death is still the last enemy, something unnatural, the final battle to be overcome. In John 12:27 Jesus, even though he knows he will triumph, quotes this Psalm as he speaks of his own troubled heart. Notice how the Psalm moves from fervent prayer to simply weeping. There are times when words are exhausted, when we simply flood our bed with tears. That is part of the setting when the Spirit prays for you with groans which are inexpressible in words.

The Lord has heard your weeping. Depend on your Lord’s unfailing love. Even in the depths of grief David grounds his plea on God’s unfailing love, his mercy to him, a sinner, verse 4. “Whatever the original circumstances . . . the psalm gives words to those that scarcely have the heart to pray, and brings them within sight of victory.” (Derek Kidner, Psalms 1-72, p. 61). God’s favor is not induced by something that David (or we) do or say, but is simply his gracious mercy, his pity for sinners. The Lord hears the cry. He accepts the prayer. He does provide deliverance. David prays for forgiveness, and rests as sured that God turns to him with favor. But you understand, even more clearly than David did, the terrible price at which that forgiveness was purchased. You see, not the sacrifice of lambs and bulls, but the suffering and death of the Son of God, your Savior. You hear him speak of his anguish as he anticipates his suffering and death. But that also gives you assurance, for the Father will never consider that price insufficient to cover your sins. Yes, weep for your sins, but as you grieve turn your eyes to the cross and the empty tomb. Although weeping characterizes the Psalm, that is not where the Psalm ends. The Lord’s unfailing love does hear the voice of your weeping. He does answer.

Share in the triumph of your King. David sings this Psalm as the king of Israel. In the assurance that the Lord has heard him, he orders away from his presence those who do evil. The first part of verse 8 is not a wish, but a command. The messianic King appropriates David’s language and uses it with far greater authority to pronounce judgment on those who refuse the narrow way of salvation offered in the Messiah (Luke 13:27), or whose commitment to him is merely verbal and superficial, and does not involve doing what he says (Matthew 7:23). Because you are united with Christ in his death, burial, and resurrection, you are dead to sin and alive to Christ. Thus you can and must join in separating yourself from sin, both from temptation outside of you, and from the corruption which still remains in you, this side of glory.

Psalm 6 offers you much better than a superficial good feeling. It takes you through the bitter weeping that recognizes that sin has struck at the very character of God. It emerges with the confidence that the Lord does and will hear your prayer for the sake of his Son. It ties the triumph of the risen Savior with you as you trust him.