Who Are We? The Catholic and Apostolic Church 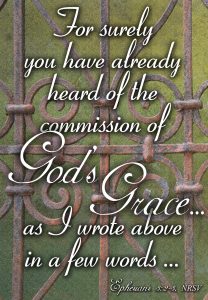 Competition can be a good thing in our economy. But life in a family operates on a different basis–as does life in the church of Jesus Christ. Because the church is connected to Christ, learn to appreciate how it works. Paul, in Ephesians 3:1-6, describes important characteristics of the church.

Recognize that the church is universal. What does “catholic” mean? We tend to think of “catholic” as “Roman Catholic,” a church which certainly claims the title. “Catholic” means “universal.” Although the concept is related to the unity of the church, unity focuses more on the fact that we as individual members (parts of the body, to use Paul’s language) are one body in Christ. “The importance of tradition for evangelicals can be seen in the strategy of the Reformers who constantly argued their position as the truly catholic one attested to by the church fathers.” (Graeme Goldsworthy, Preaching the Whole Bible as Christian Scripture, p. 11). “Catholic” emphasizes that throughout the world there is one true body of Christ–and thus it is important that we be connected to that body. Like the term “Trinity,” the concept is there and is crucial. Paul in Ephesians 3 never considers what some might have suggested today: since there are all these cultural and historical differences between Jewish and Gentile Christians, lets just have parallel churches for the two groups, at least for a while. Ephesians 3 is about the catholicity of the church. If you feel uncomfortable when someone different from you comes into church, remember that the church is catholic.

Don’t just believe it, uphold the universality of the church. Live it! Guard against the relativism that denies the uniqueness of Biblical Christianity. Sometime this is done in an effort to promote a mistaken notion of the universality of the church. Granted, Christians have tended to confuse the gospel and their own culture. But appreciate the uniqueness of God’s covenant with Abraham and his bringing salvation in the person of his Son in the way that he did. Beware of an individualism that divides churches for light reasons (though there are grounds for separation at times, as we will see as we look at apostolicity). Positively, recognize that the church is universal because she is the body of Christ. She is imperfect in the present age. She is composed of sinners, sanctified sinners to be sure, but still in progress this side of glory. She is marred by divisions. But she is one universal church. Isaiah 19 describes a unification of God’s people. Catholicity colors how you think about fellow Christians with whom you have differences. It not only affects how you talk with other believers, it ought to encourage such conversations. Remember, what is that great mystery, now revealed, that Paul speaks of in Ephesians 3 and elsewhere? It is that God, in the work of the Lord Jesus Christ, has brought together Jews and Gentiles into one church. Paul believed in, practiced, and suffered for, the catholicity of the church. In the face of a political climate that is increasingly divisive along racial lines, you as God’s people have an opportunity not only to speak in opposition to such attitudes, but also to model in the church the kind of unity that should attract those outside Christ. “Racism also denies catholicity. . . . The church has often been put to shame by its faiure to practis true catholicity and to condemn racial prejudices.” ( (Edmund P. Clowney, The Church, p. 97).

Live as the apostolic church. Build on the foundation of the apostles. In Ephesians 3:5 Paul points to the foundational place of the apostles as Christ, by his Spirit, builds his church. He is simply following through on what Luke makes clear in Acts 1 and 2, that the story of the church is the story of what Christ, the risen, ascended, exalted Lord, continues to do in his church by the Holy Spirit, through the apostles. The early church properly questioned innovative teaching that arose from outside the line of the apostles. The term “apostolic,” properly understood, does not require an unbroken line of ordination from one bishop to another, thus continuing the apostolic office. Rather, the Bible treats the office as foundational and non-continuing. What is important, as the Reformers emphasized (and did so in a very catholic way by appealing to the church fathers), was continuing in the teaching of the apostles. There have been times that separation from those who deny and oppose the gospel is required precisely because the true church is apostolic. If what calls itself the church is requiring you to sin, that time has come.

The apostolic church administers the grace of God in Christ. Paul has just spoken of the household of God. In a large household there was need for an administrator. And some of that function, especially as it concerned the Gentiles, fell to Paul. “For this reason” looks back to Ephesians 2:19-22. It is not enough that your salvation was planned from eternity or that you were chosen in Christ before the foundation of the world. It is not enough that Christ died and was raised for your salvation. That salvation needs to be applied to you. You need to stand, not outside Christ, but in Christ. And, without falling into the notion that the church is the dispenser of salvation, appreciate her work as the proclaimer of the good news of Jesus Christ. Understand her work of nurturing, administering, overseeing the body of Christ. “We need to focus on the apostolic gospel on which the New Testament church was founded. The saving truth of the gospel is to be believed and proclaimed ot the nations. The gospel is also to be lived, for holiness, no less than truth, marks the Spirit’s work. Further, this believing, proclaiming and living takes place within a community. Those who are in Christ are joined to one another in an organism. There is a holy, spiritual order to God’s community. It is not formed like other organizations, but it is a colony of heaven, a pilgrim people, traveling toward the day of Christ’s return.” (Edmund P. Clowney, The Church, p. 72).