Who Are We? A People Welcomed to the Table 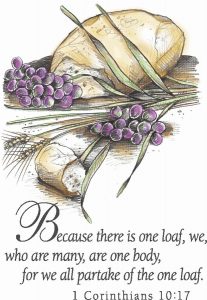 At its very heart Biblical Christianity is mysterious. The concepts of the Trinity, of the incarnation, of the love expressed in the substitutionary atonement defy attempts by our puny minds to fully comprehend them. Unbelieving minds sometimes rationalize away elements of those truths which we find difficult to grasp. Something of the mystery of our salvation in Christ Jesus carries over into what the Word, focusing today on 1 Corinthians 10:14-22, teaches about the Lord’s Supper. Guard against reducing God’s revelation to something that we can understand.

Flee idolatry. Do not be a participant with demons. Even early in 1 Corinthians 10 Paul has warned against idolatry as it came to expression in the life of Israel in the wilderness. The idols are not gods, but behind them are demons, evil spirits. Idol worship involves you in table fellowship with, in union with, demons. It gives an idol what ought to be offered to God alone. Paul’s warning takes on urgency in the context of the Lord’s Supper, which involves table fellowship with your redeemer. Avoid looking to anyone else than God as the source of power, knowledge, and revelation.

Avoid any kind of idolatry. An idol is anything in your life which is more important than God. It is easy to condemn the idolatry of ancient Israel, of Corinth, or of pagans today, but Paul’s point is that idolatry must be avoided by you! See 1 John 5:21. Examine yourself to determine what your priorities are. Remember that Paul calls greed “idolatry,” Colossians 3:5. Things that are good in themselves can become idols if they are out of balance in your life. Flee from sin. The original Passover involved flight from the slavery and oppression of Egypt. Consciously restructure your life to the glory of God. Live as one “on whom the fulfillment of the ages has come,” v.11. (The New Testament considers this the whole period bracketed by Christ’s comings.) At first glance urbane, sophisticated, immoral Corinth might seem to be worlds away from the “primitive” world of Israel wandering in the wilderness. But Paul connects them. Israel had been united with their deliverer in the cloud and in the sea. They had been baptized into Moses. The Passover was a meal eaten in the presence of God. God assured them that they were his people, redeemed by the blood of the lamb. This looked beyond Moses to the reality which you have. You have been baptized into Christ. You have union and fellowship with him. What had been shadow and promise is now an accomplished reality. Baptism marks your union with Christ at the beginning of the Christian life. Recognize the awesomeness of God’s presence in salvation and judgment. Rejoice in the privilege of living in the time of the revelation of God’s salvation. The Lord’s Supper does have a note of celebration, blessing, and thanksgiving in it!

The alternative to fellowship with idols is to live as the body of Christ. You participate in the blood of Christ. You are involved with Christ in his death. The connection between him and you is so close that you share in his death. The Lord’s Supper seals to you that real union. “The cup of thanksgiving” (the word Paul uses is the one from which we get the term Eucharist) involves participation in the blood of Christ. Thus the meal is more than just a memorial. It is a means of grace that God uses to strengthen your trust in him. Salvation involves God giving you, not just the benefits of Christ’s work, but Christ himself! You participate, or share in, in the blood of Christ. There is no salvation without the shedding of his blood in your place. In the Lord Supper he comes to you and draws you to himself, so that you partake of him. This second sacrament seals your continued union with the Savior. You no longer live for yourself.

You share in the one body of Christ. Paul is using the Lord’s Supper for illustration, but it is an illustration that works because of the connection between the sacrament and the realit it seals. The purpose of the paragraph is not to be an essay on the sacrament, although we do learn about it from what Paul says. You are part of Christ’s body, that is the church. The connection between Christ and the church is so close that the church is part of him. It is his body. You cannot properly think of Christ in the glory of heaven, without thinking of his body, both here on earth and in glory with him. “As we come to the Lord’s Table by faith we really and truly commune in his body and blood, but not because we physically ingest the substance of Christ’s flesh there, nor because his physical presence somehow comes down from whence it has ascended. Rather, we do so because we are united to him by the Spirit and in that union we own Him as our head who acts on our behalf in redemptive history.” (Daniel Schrock, “Communion as Redemption Accomplished and Applied,” www.reformedforum.org). The Lord’s Supper reflects your interdependence because you are all related to your head. Thus it is intended not for private use in isolation from the church, but for the church. You belong to one body because you belong to Christ. You are united with him as you trust in him. Don’t rationalize away the truth of which Paul speaks. As you break the bread in the Lord’s Supper, you do participate in Christ–not in a purely physical way, not mechanically or automatically, but by faith and through the powerful working of his Spirit. But you do share in Christ. How then, could you be a partaker with demons?! The best way to deal with Satan’s servants is not to become preoccupied with them but rather to focus on the power of your risen Lord! Share in the body of Christ! Remember that you belong to your risen Lord. Your life is not your own. Rather, it is “now hidden with Christ in God,” Colossians 3:3. Put off from your life the things which need to be removed, Colossians 3:5-9, and put on the new man, which is being renewed in the image of its Creator, Colossians 3:10.