What Does the Resurrection Mean to You? 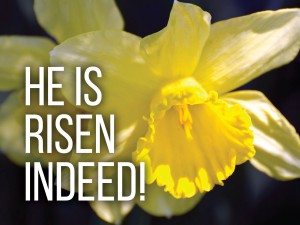 I am not asking how you feel about the resurrection, but rather, what difference the resurrection of Jesus Christ has on your life. According to Ephesians 2:4-7, Christ’s resurrection lies at the core of your existence as a Christian.

God has made you alive in Christ. The resurrection is important—for you. Each of the four authors of the Gospels believed that the resurrection of Jesus was crucial to their account. Early on even enemies of the cross sensed that a risen Christ posed a threat. Matthew describes the leaders of Israel bribing the guards to tell of falling asleep while the disciples stole the body of Jesus. But the resurrection is important, not just as an abstract, isolated historical event. In that case you might think simply that something unprecedented, truly unique had happened—but so what? God not only confronted the first witnesses with the empty tomb, he also provided angelic messengers to explain that the Lord was not there, but was risen. Similarly, God gives you, not just the bare fact of the resurrection, but gives his Word, the Old and New Testaments, to explain what the resurrection means.

The resurrection affects you because you were dead—but now you have been made alive in Christ. The Ephesian Christians, Jew and Gentile alike, and you and I along with them, had been dead in transgressions and sins. This was an active death: following the ways of the world, submitting to rebellious Satanic power, and satisfying our sinful desires. Paul describes it as a walk. We tend to focus on the passage to show that we are by nature sinners, and that it is God’s grace in Christ, that redeems us. We are saved by grace, through faith. God is the one who is active. The Father is the specific person of the Trinity in view. He makes you alive in Christ. The Holy Spirit is the agent, see verses18, 22. God does not simply help you. He makes you alive. The change in you is no less dramatic than that of Lazarus as he heard the command of Jesus to come out of the tomb. This change affects both your mind (making you aware of what you once denied), and your will (making you desirous of doing what you once avoided). All that is true. But don’t overlook how the transition from death to life takes place. It is not only something that happens within you. It is as God raised up Christ that he raised you up with him. Paul is not simply describing an analogous situation, rather, as you are united with Christ you have been raised up with him. His resurrection is also your resurrection. Your justification, adoption, and sanctification flow out of your union with your risen Lord. Christ’s resurrection is the Father’s public declaration that the Second Adam (though humbled for your salvation) is not guilty! His sacrifice has been accepted, 1 Timothy 3:16. As you are united to him, you too are declared just. The resurrection constitutes Jesus Christ as “Son of God with power,” Romans 1:3,4. As you trust in that risen Lord, you too are adopted as God’s child. Christ, by his resurrection, is set free from the domain of sin. He is liberated from its power, Romans 6. As you are buried with Christ and raised with him, you too are sanctified. “There is no other life than that which is breathed into us by Christ: so that we begin to live only when we are ingrafted into him, and enjoy the same life with himself. . . . To be made partakers of the life of the Son of God, — to be quickened by one Spirit, is an inestimable privilege. . . . And hath raised us up together. The resurrection and sitting in heaven, which are here mentioned, are not yet seen by mortal eyes. Yet, as if those blessings were presently in our possession, he states that we have received them; and illustrates the change which has taken place in our condition, when we were led from Adam to Christ. It is as if we had been brought from the deepest hell to heaven itself. And certainly, although, as respects ourselves, our salvation is still the object of hope, yet in Christ we already possess a blessed immortality and glory. . . (John Calvin, Commentary on Ephesians 2).

Christ’s resurrection means that you have been seated in the heavenly realms. The power of God has seated Jesus Christ at the right hand of the Father in the heavenly realms, Ephesians 1:20. If you are united with Christ, if you have been made alive with the risen Lord, then you have been seated there with him. His glory belongs to you now, even though its full expression will become evident only in the coming ages, verse 7. The removal of the shroud of death described in Isaiah 25 has already begun. The Lord’s Supper, with which this service concludes, is a foretaste of that great feast in the new heavens and earth.

How does all of this happen? It is by grace that you have been saved. Live by grace through faith. God’s grace is a free, undeserved gift. Paul underlines that by contrasting your former way of life in transgressions and sins with the glory that is yours in Christ. You cannot earn what you have receive. You do not deserve what has happened. It is all of God’s grace. Notice the double use of the phrase “it is by grace you have been saved,” verses 5 and 8. Your union with Christ in his death and resurrection is a union that takes place by faith. Faith is not just trusting God for something, it is a living relationship with a person—Jesus Christ. The Catechism puts it well when it speaks of enabling you to “embrace Jesus Christ.” All boasting is removed. The glory goes to the God in whom you trust.

Therefore, walk in good works. God brings glory to himself by bringing you to himself. Your life gives glory to God as you walk in your new life. Notice the parallel and contrast, from walking in transgressions and sins, verse 2, to walking in good works, verse 10. The God whose thoughts and ways are higher than yours calls you to turn from your sins to the salvation he offers. “Having begun with a ‘walk’ in trespasses and sins, Paul ends by mentioning its counterpart, a ‘walk’ in good works. Accordingly, the decisive pivot of this experiential reversal, effecting this about-face in ‘walk,’ is being raised with Christ.” (Richard B. Gaffin, Jr., Resurrection and Redemption, p. 43).