What Do You Do with a King on a Donkey? 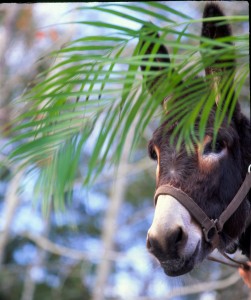 Once a month a pastor friend of mine and I take turns driving to an early morning board meeting. My friend is big, 6′ 4″ tall, was a contractor before he entered the ministry, and still looks like he could nail 2x6s and sheets of plywood all day long. When he picks me up it is in his roomy Ram truck, a vehicle that is capable of taking a load of lumber to a work site (which he doesn’t usually do), or pulling a trailer on a hunting trip (which he does do occasionally). His truck seems suited to who he is. It fits him. I think about that when it’s my turn to drive and he folds himself into the passenger seat of my ten year old Honda Civic. What you drive seems to say something about who you are. His vehicle really suits him (though my Honda gets better gas mileage!).

John 12:12-19 records what is called the Triumphal Entry of Jesus into Jerusalem, during which he is hailed as the King of Israel. But in this royal procession, King Jesus is mounted, not on a majestic war horse (Alexander the Great had ridden a magnificent steed, Bucephalus), but on a donkey! What do you do with a King on a donkey?

Understand that what John describes is truly a royal procession. His account is briefer than some of the other Gospels. Jesus in coming up the hill from the town of Bethany, where he had been a guest at a dinner, along with Lazarus, whom Jesus had raised from the dead. A crowd, including pilgrims who had come to Jerusalem for the Passover Feast, had come out to see Jesus and Lazarus. The palm branches the crowd waved were celebratory, but also were a symbol of nationalistic aspirations. The Passover itself was a time of remembering the deliverance from slavery in Egypt, a time of increased anticipation of the coming Messiah.

The language the crowd used was royal and messianic. You probably don’t use the word “Hosanna!” frequently. It means, “Save now!” but had become an exclamation of praise. That, and the blessing on the one coming in the name of the Lord are taken from Psalm 118. To it the people add, “Blessed is the King of Israel!” There is no doubt that they see Jesus as King.

Further, this event marks a change in what Jesus does. Remember his words to his mother at the wedding in Cana, “My time has not yet come.” In the intervening chapters he has avoided events and actions which would publicize his kingship. Following the feeding of the 5,000 Jesus had withdrawn to a mountain because the crowds wanted to make him king. But now he allows the crowd to acclaim him as King. In fact, he encourages it by finding a young donkey and sitting on it as he enters the city. John points out that this act fulfills the prophecy of the coming Messiah found in Zechariah 9:9. He is King, but rides on a decidedly non-imperial mount.

So what do you do with a King on a donkey? The crowds hail him and wave branches. When, however, he fails to meet their expectations of setting up an earthly kingdom and driving out the Roman rulers, they turn against him in disappointment. Doubtless many of the crowd that shouted “Hosanna” during the entry changed their cry to “Crucify him!” before the week was over. Do you seek a Jesus who will meet your preferences, who will comfortably suit your agenda? You will be no less disappointed than the crowds.

There is another group that decided from the beginning that they and Jesus were not for each other. That is the Pharisees and other leaders of the people. They were jealous of Jesus and saw him as a threat to their positions, John 11:48. In fact, their concern following the powerful sign of Jesus raising Lazarus from the dead was so strong that they responded by plotting to kill Lazarus as well as Jesus. Their cry at the Triumphal Entry was that the whole world had gone after Jesus. Unwittingly they underline a theme that John’s Gospel has been emphasizing. Jesus is the Savior, not just of Israel, but of the world! They speak more truth than they know, but they reject the Messiah.

The final group that responds to this King mounted on a donkey is the disciples themselves. As the other Gospels indicate, they had assisted in obtaining the colt and preparing it for the Master’s use. But, as John admits, they had done so in ignorance at the time. It was only after the resurrection and glorification of Jesus that they understood the significance of the events that day. Yes, Jesus was the King, but he was mounted appropriately on a humble donkey because his kingdom would come, not through doing battle with the Romans, but by the suffering and death of the King. The road to the throne may lead into Jerusalem, but it leads out again to Golgotha before he ascends to it.

John Calvin comments on John’s admission that it was only after Christ’s glorification that the disciples understood these things: “We are blind, unless the word of God go before our steps, and it is not even enough that the word of God shine on us, if the Spirit do not also enlighten our eyes, which otherwise would be blind amidst the clearest light. This grace Christ bestowed on his disciples after his resurrection, because the full time, when the Spirit should bestow his riches in great abundance, was not come, until he was received into the heavenly glory.”

What do you do with a King on a donkey? John wants you to see that king through the lens of his completed work. He wants you to recognize that his kingship is far more sweeping, far greater, than what even the most enthusiastic palm-waver might have imagined. He wants you to submit to that King as your sovereign Savior, commit to him, and serve him.