What Do You Do in the Presence of God? 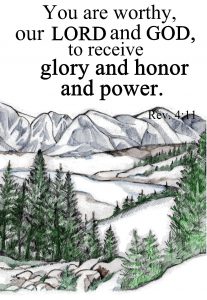 Be aware of what you cannot see. Come through the door with John. Some of the believers in the seven churches had suffered for the sake of Christ, scorn from neighbors, economic loss, persecution, and even martyrdom. John will be shown “what must take place after this,” but the focus of the vision is not a detailed map of the future, but rather a throne, and One sitting on it. John sees a throne. Around it is a rainbow. The promise of Genesis 9 still stands. God is faithful to his Word.

See the invisible God! John sees a throne, and there is One sitting on it—but he never describes what that person looks like. There is good reason for that. The throne is God’s and he is Spirit. The second commandment prohibits you from trying to make an image of him. No words, no pictures would be adequate to portray him. Instead, John shows you what and who surround the throne. The rainbow reminds of precious stones refracting glory light. Before the throne is a sea of glass, as clear as crystal. That brings to mind the laver in the court of the temple. Some have suggested that the imagery of Revelation 4 and 5 reflects the order of worship in the early church, or the synagogues, or even the temple before that. But remember that the tabernacle and temple themselves were patterned after the heavenly temple Moses saw on Mt. Sinai. John is showing you, not a reflection, but the original. The sea and the triumphant songs bring to mind the celebration of victory in Exodus 15. 24 additional thrones add to the majesty of this heavenly court, where 24 elders are seated. Though there seems to be a connection with God’s people of the Old and New Testaments (12 tribes, and 12 apostles), these elders apparently are an order of angelic beings. Note that in Revelation 7 they are distinguished from the church that is praising God. And Revelation 2 and 3 have shown a connection between the churches and the angel associated with them. Then John sees four living creatures. As you compare Ezekiel 1, Daniel 7, and Isaiah 6, these seem to represent cherubim, another order of angelic beings. The Old Testament imagery is reproduced, but in modified form. They seem to be symbolic (like much of what is described in these chapters), rather than an attempt to give you a physical description. Significantly, both Ezekiel 1 and Revelation 4 struggle to show you the majesty and glory of your God, but without picturing him.

Your God is the Sustainer and Creator. Your God is sovereign. Ezekiel prophesied to God’s people in captivity. What suffering Christians in the first century needed to remember is that their God is in control. And that is a message that Jesus had John record, because it continues to be his word to you today. Job needed to learn that God is sovereign. Because that book is not just for Job, but for you as well, in the opening chapters it describes the heavenly court. “[T]heologically and biblically speaking the the throne room of God in Revelation 4 represents the heart of the universe, the heart of meaning, the heart of history. Our lives are renewed through worship, through adoring the God who created us and saw fit to redeem us through the blood of the Lamb. Revelation renews us, not so much by telling us about particular future events, as by showing us God, who will bring all events to pass in his own time and his own way.” (Vern S. Poythress, The Returning King, p. 99).

God upholds you—because he made you. You cannot picture God, but in describing the majesty of his heavenly attendants, John reminds you that they are creatures whose function is to praise their Creator. We may be impressed with a rocket powerful enough to put a red Tesla roadster into orbit around the sun. I suspect that John would agree, but then remind us that this car with Spaceman at the wheel is orbiting the sun that God created, and that is a smallish star in one galaxy among countless others, also all created by him. The ESV catches the word order of the last line of the chapter, “and by your will they existed and were created.” Creation brings them into existence, but John emphasizes that they exist and function under God’s control. If he is wise enough to control all things and powerful enough to create them, you and I can take heart. Nothing that happens to you is outside of his control. He cares for you enough to redeem you, as Revelation 5, part 2 of this vision, reminds you.

Worship the One who lives forever and ever. Sing the holiness of your eternal God. What is the heavenly court busy doing? It is doing what the seraphim of Isaiah 6 were doing, ascribing holiness to the Lord whose glory filled the temple. They are doing what Daniel 4 and Daniel 7 describe: sound praise and worshiping God. They are doing what Israel on the far side of the sea were doing as they witnessed the Lord’s destruction of their enemies. They call God holy. They fall on their faces before him. You think of angels as God’s messengers, carrying out his will, protecting his people, busy serving him. That is accurate. But these angelic beings who form the heavenly court function to sound the praise of their God. He is eternal. They are creatures who had a beginning. He is Creator, they are creatures. Their function is to praise.

Worship your Lord and God. John describes this heavenly praise, as did the prophets before him, because, though we are in a real sense, lesser than the angels, we are called to worship and praise him. “The Lord and our God” is a phrase strikingly similar to the language used to address the Roman emperor Domition, dominus et deus noster. That title, Revelation reminds you, belongs to no human being, but only to the eternal God. “The Book of Revelation wages war on the reductionism that chokes awe. Among its most pervasive motifs is that those who see only the surface, who explain human history and experience merely in terms of observable (physical, economic, political, societal) forces, are blind to the pattern that explains why things happen as they do. To see that deep pattern is to experience an awe impervious to cynicism because it is to stand in the presence of the God who is worthy of our fear and wonder.” (Dennis E. Johnson, Triumph of the Lamb, pp. 96–97). I have people tell me that their worship is going into the great outdoors. There is an element of truth there—the heavens declare his glory, and we live in an area where the majesty of the Creator is wonderfully displayed. But that is not a substitute for gathering to worship God. Not only are his people gathered in his presence, but part of the point of Revelation 4 and 5 is that your worship is part of and is adding to the voices of the angelic beings sounding his praise.

The problems you face have not disappeared. But, as you gather in weekly worship, you are being reminded of your Creator’s care. You are being renewed in fellowship with him. You are reminded that it’s not all about you—it’s about the infinitely holy eternal God who has redeemed you. What do you do in the presence of God? You worship!