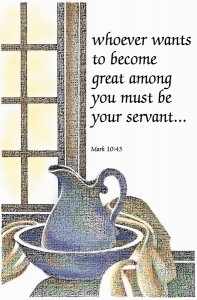 You might be tempted to skip over reading Romans 16:1-16. It’s full of names that we find hard to pronounce. While a few of them are mentioned elsewhere in Scripture (and there may be an extra-biblical reference to one or two of them), for most we know only what we read here in Romans 16. You can understand Paul writing this, giving personal greetings to people he knew in a church that he hoped to visit before long. But why did the Holy Spirit, who inspired Paul’s writing, include this chapter in our Bible?

Several of the people identified by name are women. Paul speaks highly of their work for the church and with him in the Lord. The idea that Paul hated women and suppressed them finds no support in the warm greetings and generous descriptions recorded here!

The names give us insight into the composition of the church. In a day when one’s name reflected social standing, several can be identified as names characteristic of slaves or former slaves. Other names would more typically belong to people of high social positions. Both are included in this list, as are names of Gentiles and Jewish Christians. The church of Jesus Christ cuts across social and economic barriers. Paul’s list of people he greets challenges you to move beyond your comfort zone in reaching out to those in need of Christ.

Perhaps most significant in this passage is a phase used to describe two of Paul’s friends. Andronicus and Junia were kinsmen of Paul (at least fellow Jews, if not a closer familial relationship) and had been fellow prisoners. Paul describes them as having been “in Christ before me.” Paul knew that he had been chosen by God in Christ before the foundation of the world (Ephesians 1). He had been united with Christ in his death and resurrection (Romans 6). But, before he met the Lord on the Damascus road, he had been outside of Christ, a child of wrath, to use the language of Ephesians 2:3. But, at a particular point in history, he had by God’s grace, been brought in Christ. What was true for Paul remains true for all who trust in him. God has united you to Christ, and in him given you all the benefits that belong to those who are in Christ.

Richard Gaffin comments: “In Romans 16:7 Paul mentions those who ‘were in Christ before me’ or ‘before I was.’ Here Paul, speaking autobiographically but surely representatively of all Christians, brings into view a before and after of being ‘in Christ’ that points to a critical transition.” (By Faith, Not By Sight, p. 37)

As you read this list of names, ask yourself is your name is one of those who are in Christ.