Vengeance Is the Lord’s 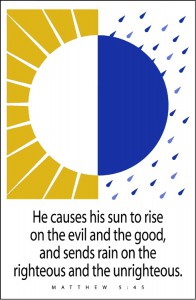 Have you seen the bumper sticker, “I don’t get mad – I get even”? Possibly it is a deterrent against tailgating (though you are probably already too close if you can read it!), but it breathes a different spirit than the one Paul expresses in Romans 12:14-21.

Here Paul commands you to bless those that persecute you. Instead of seeking retaliation, remember that vengeance belongs to the Lord. Positively, do good to your enemy, even feeding him or giving him something to drink if he is hungry or thirsty!

In the broader context of presenting your bodies as a living sacrifice to God (Romans 12:1), and showing genuine love (verse 9), Paul turns to how you relate, not just to fellow believers, but to those in the world around you (verses 14-21). His instructions do have implications for how we relate to fellow believers, but the focus is on dealing with those outside the faith. As long as you who belong to Jesus Christ live in a world that is in rebellion against him, there will be tension and conflict. Sometimes that opposition takes the drastic form of open persecution. But even then you are to bless instead of cursing! Paul, in a rapid fire series of brief imperatives, gives specifics on how you do that: live in harmony, be humble, and live peaceably with all men as much as is possible.

Perhaps one of the more difficult areas in which to obey this Scripture is when the standards, ethics, and life-style of the world contradict those of believers. For four decades North American Christians have lived in a culture that allows the taking of lives of unborn children. More recently in some areas, including the state in which I live, the taking of life at the other end of the age spectrum has been legalized. Recently same sex marriages have been legalized in some jurisdictions. How should we as Christians respond to a culture that lives in rebellion against God and his Word? Some Christians simply keep their heads down, try to avoid anything controversial, and hope to be left alone. Others who claim the name of Christ react loudly, pronouncing judgment on and hatred towards those they oppose. These are usually the ones that make the headlines.

But how does God want you to deal with these very serious issues? Not by reacting in anger, not by considering yourself superior, but by blessing. Yes, blessing even those who, by their actions are proving themselves (at least at this point) to be enemies of God. Positively that involves finding ways to do good to those who are your enemies.

One of the reasons you don’t have to get even is that it is God’s task to execute vengeance–you don’t have to take it into your own hands. (In Romans 13 Paul moves on to the subject of public justice, where the governing authorities are God’s servants in condemning wrong and promoting good.) You can entrust yourself, as did your suffering Savior (1 Peter 2:23), to the hands of the Father.

Paul raises the interesting quote from Proverbs 25, about your good deeds heaping coals of fire on your enemies. Without going into all the details of interpretation, Paul seems to be making a point similar to the one that Peter did in 1 Peter 3:13-17, that your good behavior in the face of suffering may cause your persecutors to glorify God.

Perhaps you respond, Paul, you’re asking the impossible. Well, he is. You cannot bless in the face of persecution, you cannot be a true peacemaker in your own strength. Paul is not simply giving you a pep talk about how to live. He is calling you to the radically changed life of being a living sacrifice. He wants you to remember that you (like himself) were once an enemy of God. While you were a sinner Christ loved you and died for you. It is only as you appreciate the depths of the forgiveness you have received that you, in turn can overcome evil with good.