Unto Us a Child Is Born 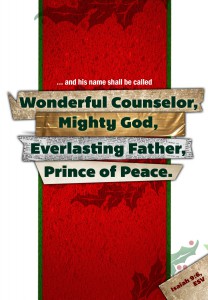 While the United States does not have royalty, across the spectrum we do tend to look to political figures as essential to providing what we need. That may be a political expression of a deeply human understanding that we need to look someone besides ourselves to meet our deepest needs. Isaiah 9:6 points you to the ultimate ruler you need.

A child-ruler has been born. He is a child. Isaiah sets the birth of the infant in contrast with the human military might of Aram and Assyria. He is the Son. Isaiah is not being redundant. He is not only the Son of David, as the context makes clear, but is also the Son of God. See Psalm 2:7; John 3:16; Hebrews 1:1,2. He was born for you. This child has already been promised and described as “Immanuel,” Isaiah 7:14. He came for God’s people as a whole, and for each of God’s people. Specifically, he came for those who were in the darkness of Isaiah 9:2. He came for you.

He is the great ruler you need. Government rests on his shoulder. This is not just a mere insignia of rule (a sergeant’s stripes), but the government itself is on his shoulders. His rule is permanent and glorious, v.7. All power is given to him. His kingdom is not of this world, but it is all-inclusive. Beware of identifying the kingdom of God with the rulers of this world, whether of the left or of the right. Don’t limit the rule of the King of kings. “This government is the kingdom of grace, but also in widest extent, the kingdom of nature and power. All the world is subject to the rule of the Child.” (E. J. Young, Commentary on the Book of Isaiah, Vol. 1, p. 331). The extent and power of his rule comforted God’s people as they face the threat of invaders. It reassured them as they dealt with a king, Ahaz, who refused to respond to God’s gracious commands. It comforts you as you wrestle with the difficulties of your life in this sin-cursed world.

Listen to (and respond to) his names. The name describes the person. These are not names by which he was eventually called, but descriptions of his character. There are probably four names here (despite the punctuation in the KJV and Handel’s Messiah echoing in our ears). Four names provides a balanced structure, with each pair showing both his deity (“wonderful,” “God,” “eternal,” “prince”) and his humanity (“counselor,” “mighty,” “father,” “prince”).

Wonderful Counselor. The word describes miracles, such as those in Egypt, Psalm 78:12. In Judges 13:18 it refers to the deity of the Angel of the Lord. He is God. He is Wonder. The abstract stands for the concrete, and is stronger than the adjective, “Wonderful.” He is Counselor. To be the messianic King requires wisdom. He is wise, Isaiah 11:2, and imparts wisdom to his people.

Mighty God. The Hebrew word El refers to the true God in Isaiah and in the rest of the Old Testament, see Isaiah 10:21. God is not man, Isaiah 31:3. The marvel is that this child to be born is truly God. He is mighty. He is a hero, the mighty victor. Included is not only the character of his child, but also a reflection on what he would do. In John 16:33 Jesus reassures you, “I have overcome the world.” He is sovereign and powerful as your Savior.

Everlasting Father. “Eternal” is an attribute of God, Isaiah 57:15. All that God is, this Child is. One wonders how much Isaiah or his original readers understood of this–but then, even from our perspective in the New Testament, it remains a mystery which our puny mind cannot comprehend. He is a father to his people. He acts towards his people in the way that a good father does to his children. And he does this eternally. He forever guides you and meets your needs. See Isaiah 63:16, Psalm 103:13.

Prince of Peace. He is a prince, a ruler, David’s son. His messianic kingship is intertwined with his humanity. He is Peace! He establishes peace by his perfect obedience, his sacrificial death, and his justifying resurrection. “Not only must man be at peace with God, but what is more important, God must be at peace with with man. The enmity which had existed between God and man must be removed. It was human sin which had kept God at enmity with man. When that sin has been removed, then there can be peace.” (E. J. Young, Commentary on the Book of Isaiah, Vol. 1, p. 340). The problem of your sin has been dealt with. God establishes peace between himself and sinful man. There is no longer condemnation, but peace has taken its place, Romans 5:1. Dr. E. J. Young remarked that this list of names, like the Aaronic blessing, ends with the word “peace.”

Peace comes to you because this Child has been born for you. Come to him, continue to trust in him. May his peace rule your heart and life.