Triumphantly into the Temple 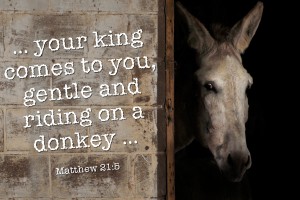 Jesus not only entered Jerusalem in a triumphal parade, he continued on into the Temple. As he continued his triumphal entry in to the temple (Matthew 21:12-17), his actions and words challenge you to re-evaluate how you respond to him. Ask yourself, do I respond to Jesus the way that I should? Are we as a church being the kind of church that the Lord wants us to be? In what ways do I need to be cleansed? How should we be worshiping?

You are familiar with the story of the Triumphal Entry, the major event of Palm Sunday. Finally Jesus is willing to be hailed as the messianic King. He clearly accepts the majestic, messianic titles of “Son of David” and “the one coming in the name of the Lord.” At the same time, his actions send the message that his followers, both outside Jerusalem that day, and today, need to change their expectations as to who he is. Matthew details Jesus’ instructions to bring a donkey and her colt. The actions bring to mind Zechariah’s prophecy of the gentle character of the King.

The triumphal procession of Jesus does not stop with his entering Jerusalem. Matthew describes him going on to the temple and doing the things at which we are looking today. Mark 11 gives more historical markers than Matthew does, making clear that the cleansing of the temple took place the day after the Triumphal Entry. Matthew, while not contradicting Mark, records the entry into Jerusalem and the events at the temple together to make sure that you recognize that they are connected. The authority of King Jesus continues, even while his actions emphasize other aspects of his redemptive work.

Don’t make the mistake of thinking that the gentleness of Jesus is weakness. To the Old Testament priests had been given the responsibility of caring for and protecting the temple. The Son of David is not of the tribe of Levi, but he is the ultimate Priest. Entering the temple, he drives out those buying and selling animals for sacrifice and overturns the tables of those exchanging money. Jesus restores the temple to its purpose as a house of prayer, Isaiah 56:7; 1 Kings 8:30.

Cleansing the temple did restore the precincts, at least briefly, to their proper function. It was also an acted out parable. By his messianic death, which he would accomplish before the week was over, he would cleanse, not a magnificent building of stone, but the living temple of his people. In doing so he would be both the priest offering the sacrifice and he would be the Lamb of God, taking away the sin of the world.

The traders had re-purposed the area designated for the worship of the Lord by those who were not Jews. Solomon recognized that foreigners could come there to worship Israel’s God, 1 Kings 8:27. Isaiah 56:3,4 speaks of foreigners and eunuchs (barred from the temple under the ceremonial laws) coming to the temple. Are you willing to have the great Priest rearrange your life, casting out the things that interfere with the proper worship of God, restoring you to what you should be? You cannot have him as your Savior without also submitting to him.

Jesus replaces the trading with a more appropriate activity. Even in the Old Testament the temple was recognized as a place where prayers were answered. Solomon recognized that foreigners could come there to worship Israel’s God, 1 Kings 8:27. Isaiah 56:3,4, looking ahead in the history or redemption, speaks of foreigners and eunuchs (barred from the temple under the ceremonial laws) coming to the temple. Jesus receives crowds in the temple area and heals the blind and the lame. His healing manifests his kingdom. Where the King is present the effects of sin are rolled back. This King has not only healed the blind and lame. He has dealt with the blinding and crippling effects of sin by dealing with its source. He has paid the penalty for your sin and has incorporated you into his living temple.

That proclamation of the Word continues as children begin shouting, “Hosanna to the Son of David!” The priests and scribes become indignant. They had been powerless to oppose the crowd during the triumphal entry. They couldn’t protect the merchants from being expelled. And how could they stop people from being healed? Now the children cry, “Hosanna to the Son of David!” and they finally have a problem of manageable size—they think! They expect Jesus to stop what they consider a ruckus.

Jesus again quotes Scripture. Psalm 8 speaks of God condescending to accept the praise of mankind. It refers to little children, infants, even, praising God. If that is appropriate in view of God’s majestic creative work, how much more when they are singing praise the messianic King (who may well have just healed some of their relatives!). Klaas Schilder describes the scene: “The learned gentlemen next to Jesus seem to think that children’s voices are not in consonance with the atmosphere of that lofty temple. But Jesus says that the temple is precisely the place for such praise. . . . Surely, they cannot expect Jesus to regard that too common which is not too trivial for God!” (Christ in His Suffering, pp. 140, 141 © 1938. Pub. by Wm. B. Eerdmans Pub. Co.) Jesus does more than pluck a verse out of this Psalm. As he prepares to go to the cross, he is singing the whole Psalm, reflecting as Hebrews 2:5-9 makes clear, both the humiliation and the exaltation of himself as the Son of Man.

Because he triumphantly entered the temple, because he has shed his blood, not just to do a minor cleaning, but to renew you from the inside out, to make you a living stone in his temple, join the song of the children.