Through Hardships into the Kingdom 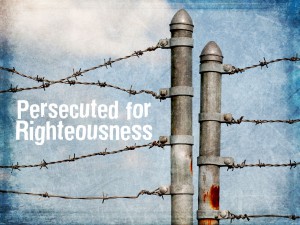 Endure hardship boldly. Do not be surprised by suffering. Hardships happened to Paul (Acts 13:50; 14:5-6, 19-20) and you can expect them as well. The assurance of some TV evangelists that God is providing you with a wonderful life right now is simply not true. You are united to Christ by faith. Union with Christ involves suffering with him as well as sharing in future glory, Romans 8:17ff; Philippians 1:29-30. They are the result of being united with Christ in a world that is still suffering under the curse of sin and the effects of the fall. Included in those sufferings are not only the big things might think of—Paul’s being driven out of cities, stoned, left for dead—but also all the friction and frustration that comes from living as one who belongs to Christ but is still in this sin-cursed world. Cancer strikes. Friends abandon or betray. Work relationships turn ugly and difficult. All of these are part of the hardships through which believers go. The Psalmist in Psalm 74 is grieving the unthinkable: God has allowed his temple to be destroyed and his people taken captive. Yes, non-Christians suffer some of the same things. But you suffer them as one who belongs to the risen, ascended Savior. Be prepared for these hardships. They do not mean that God has abandoned you. They do not mean that your faith has crumbled.

Remain true to the faith. Paul makes his return trip through cities where he has suffered rejection and has almost lost his life because the believers there need encouragement. They need to be exhorted to remain true to the faith. They have placed their faith in Christ, and that trust needs to be encouraged and nurtured. Like them, you need the assurance that nothing can separate you from God’s love in Christ Jesus. You need to be willing to put in the effort to be in the Word, to turn to the Father in prayer. You need the encouragement of the church. Paul not only strengthened and encouraged the disciples, but he and Barnabas appointed elders in each church. We always need the rest of the body of Christ, but particularly in times of hardship and suffering that help is crucial.

There was more structure to the kingdom/church than we sometimes assume. Elders were appointed to oversee believers in each church. The organization was important, as becomes especially clear in the letters Paul wrote near the end of his ministry. Though your work in God’s kingdom may be far reaching this week (all that you do you do as one who serves the King), what you are doing as you assemble in worship is to meet with your King, to renew your covenant commitment to him, and to have him reassure you of his commitment to you.

There is a future aspect to this kingdom. Look forward to the fullness of the kingdom. You are striving to enter it. You look forward to the full, unopposed rule of King Jesus, something that will be a full reality at his return. Like the early Christians, you live after the ascension of your King, but before his glorious return. In this in between between period, Paul calls you to focus, not on your hardships, but on the glory of the kingdom and the presence of the King. Your King, crucified, risen, and ascended in your place is your confidence. “Yes, there may be times when you cry out like the disciples in the storm on the Sea of Galilee: ‘Do you not care if we perish?’ (Mark 4:38 RSV). But you cannot fix your gaze on the cross without knowing that he cares beyond words for you. If he died for you, how can you doubt that he cares for you?” (Sinclair B. Ferguson, Deserted by God?, p. 44).

Even in the midst of hardships, look for God to build his kingdom. In Lystra a young man with a Greek father but believing mother and grandmother heard Paul and became one of his companions. Despite the persecution, churches were organized. The existence of those churches was grounds for the joyful report of Acts 14:27 and 15:3. As individual believers and as the body of Christ we face hardships from outside and from within. But because the kingdom is the kingdom of God, its outcome is not in doubt.

No less than the believers of Antioch, Iconium, Lystra, and Derbe, you have been committed into the Lord’s hands. Despite the hardships you face, and even through them, enter the kingdom of God. Your Savior suffered. So will you as you follow him to glory.