Things Are Not What They Seem 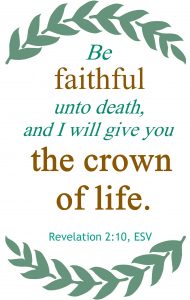 A paradox is something that seems contradictory or impossible. Perhaps you’ve seen Waterfall, a lithograph by M. C. Escher, depicting an impossible waterwheel and aqueduct. Some of Jesus’ teaching seemed paradoxical, such as the Beatitudes. Jesus’ address to the angel of the church of Smyrna, Revelation 2:8-11, contains seeming paradoxes.

You are poor, but rich. Your Lord knows your tribulation and your poverty. Smyrna, located on an important trading route, was a prosperous merchant city. It may be named after the myrrh it harvested and sold. It was loyal to emperor worship and local deities. It seems that business and worship of idols were deeply intertwined. Those who refused to acknowledge Caesar as Lord may well have been excluded from jobs and other economic opportunities. The refusal to participate in idolatry resulted not only in economic loss (“I know your poverty”), but also in tribulation or affliction—persecution, imprisonment, and even the real threat of martyrdom. To this suffering church, Jesus says, “I know.” He knows their affliction and poverty. Similarly, he knows you and your situation. There is no trial you are experiencing, no suffering you face, of which he is not aware.

God uses even the activity of the devil. The Christians in Smyrna were being slandered by those whom Jesus describes as claiming to be Jews, but who are actually a synagogue of Satan. Under Rome for some time Jews enjoyed the status of an allowed religion, and were under less pressure to engage in idol worship. Early Christianity, originating in Israel, came under that umbrella. But later, especially after the destruction of Jerusalem, some Jews, wanting to distance themselves from the Christian refusal to worship the emperor, and because the Christian message of a crucified Messiah was offensive, made accusations to the Romans against Christians. You see some of that happening during Paul’s missionary journeys. That may well be the background of the slander of those described in this paradoxical way. Jesus predicts upcoming suffering. It is the devil who will cast some of the Christians into prison. Prison, for the Romans, was not the place for doing hard time, but was a place to hold those facing trial. This time of persecution will be relatively short lived (ten days—a number of completeness), but leaving prison might mean release—or it might mean execution. Jesus calls the church to be faithful, even to the point of death. The actor here is the devil, who casts Christians into prison. But behind his activity, God is at work. “To test you” or “in order to test you” is not the devil’s intent. His goal is the destruction of those who follow Christ. It is God who is testing his people, using the furnace of affliction to separate the precious metal from the dross, using even the devil’s wicked plans for his own purposes. This letter to Smyrna, like the Book of Job, reminds you who is really in control.

In the First and the Last you are rich. Notice how Jesus identifies himself. In Isaiah 44 “the first and the last” is used to identify the living and true God—in contrast with idols made by men, the idols whom Isaiah mocks. He is all that Yahweh is. But it is not just who he is. Look at what he has done. He was dead and is alive. As you trust tin him, as you are united by faith in this Victor, you have riches that endure for all eternity. “Paradox is vivid in the letter to Smyrna, one of Jesus’ two blameless churches. The Smyrnan Christians are poor, yet they are rich. Their opponents claim to be Jews but are Satan’s synagogue. The victor who is faithful to the extremity of death is promised a crown of life and safety from the second death. This promise is secured by the One who is Israel’s eternal refuge (‘first and last,’ echoing Isa. 44:6; 48:12) and yet is also the suffering savior who ‘was dead and has come to life’ (Rev. 2:8).” (Dennis E. Johnson, Triumph of the Lamb, p. 73).

Be faithful to death—and receive the crown of life. Listen, if you have ears! Near the end of each of the seven letters is the expression, “he who has an ear, let him hear.” The expression grows out of Isaiah’s call, Isaiah 6:9-10, and his difficult commission to speak to those who will not hear. As God’s people in the Old Testament turned away from the Lord towards idols, the prophets took up symbolic actions and parables, with the purpose of getting attention and turning the people back to the Lord. Jesus takes up parables, not only to illustrate and clarify his teaching to those who turn to him, but also with the purpose of concealing the truth from those who rejected him, Matthew 13:9-17. The hearers in the seven churches faced with the temptation to succumb to idolatry, and you, faced with the idols of our age, need to have your ears open in order to hear what your Lord says and then to serve him instead of idols.

Be faithful. The Christians at Smyrna face imprisonment, and even death. Jesus calls them to be faithful. Being faithful to your Lord can mean suffering and even death. But, ironically, those who face death belonging to the Lord will receive a crown of life. In the ancient world this crown was not gold encrusted with jewels, but a wreath that symbolized victory and rule. Jesus assures those you who are faithful that he will be faithful to you, giving you this crown of life. When Bruce Hunt, along with Korean Christians, was imprisoned in Manchuria for refusing to worship the image of the Japanese emperor, and was led from prison to court and back, Korean Christians on the streets would whisper, “to the end,” reminding the prisoners to be faithful (Mt. 10:22 “All men will hate you because of me, but he who stands form to the end will be saved”).

Overcome! Overcoming in the Book of Revelation does not mean rising up in arms and defeating the enemy. Rather, it means submitting to the One who is testing you. It means trusting in the One who was dead and is alive. It means being faithful to him regardless of the cost. You, like everyone else, will face death. For some it will be natural causes. For some it is the death of a martyr. But to those trusting in him, Jesus himself assures you that, though you die once, you do not fear the second death. Beyond the end of your life on earth lies the Day of Judgment. Those who overcome by by the blood of the Lamb enter glory. But those who reject him face eternal judgment, which Jesus calls the second death. In order to overcome you need to continue to hear the words of your Lord. “[T]he churches are to read and reread the book in their assembly so that they may continually be reminded of God’s real, new world, which stands in opposition to the old, fallen system in which they presently live. Such a continual reminder will cause them to realize that their home is not in this old world but in the new world portrayed parabolically in the heavenly visions.” (Gregory Beale, The Book of Revelation, NIGTC, p. 175).

The paradoxes of Revelation may be hard to understand and difficult to accept. How can you be poor, but counted rich? How can you face death but wear the crown of life? But the paradoxes prove to be only apparent paradoxes, because, in a strange, paradoxical way, the One in whom you trust made himself poor so that you might be rich. He was faithful to and through death. But he is alive, and so are you as you trust him.