The True Temple and an ‘Aha!’ Moment 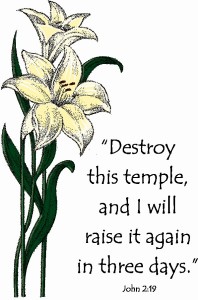 An air of expectancy characterized the people of Israel as Jesus began his public ministry. The source was found in the prophetic Scriptures, such as Malachi 3:1-5, which promised that the Lord would come to his temple as refiner and purifier of his people. The expectation was amplified by John’s self-identification as the voice, crying in the dessert, preparing the way for the Lord.

As Jesus began his public ministry, John records signs that Jesus performed, signs that help you understand who he is and what he does. In looking at the miracle of making glorious, abundant wine (John 2:1-11), we saw Jesus do far more than relieve a newlywed couple of an embarrassing deficit in their hospitality. As he had the jars used for purification filled with water which then quietly became wonderful wine, his sign pointed to himself as the true purifier of his people. Having blessed marriage in the first half of the chapter, Jesus now moves to a much more public setting, the temple in Jerusalem, and identifies himself as the purifier of his people and of their worship, John 2:12-25.

How can a holy God be present with his people–without their being consumed by his holy anger against sin? First with Israel in the wilderness in the Tabernacle, a portable temple, then once they reached the promised land in the Temple in Jerusalem, God made clear that he was with his people. In the Most Holy Place where the Ark of the Covenant formed the symbolic throne for the invisible God. But sinners could approach God only through the intercession of the priests and by bringing sacrifices to atone for their sins.

As Jesus went to Jerusalem to celebrate the Passover feast, he found the temple courts (probably the area intended to be a place of worship for God-fearing Gentiles) overtaken by men selling cattle, sheep, and doves and those exchanging money. Now there was nothing wrong with selling animals to people who traveled a distance and could not conveniently bring their sacrifices with them. Nor was it wrong to exchange currency for the higher quality coinage suitable for the monetary offering required in the temple. What was wrong was doing all this in the temple courts. The house of God had become the liturgical equivalent of Walmart, as a friend of mine put it.

In holy wrath unmarred by the sinfulness that often accompanies our own anger, Jesus makes a cord and drives out the merchants, scattering coins, and overturning tables. He exclaims, “How dare you turn my Father’s house into a market!” There’s more to that exclamation than you may realize. We have become used to calling God our Father. But in first century Israel that expression was almost unheard of–at least until Jesus taught his disciples to pray the Lord’s Prayer. Do you hear in that expression his claim to be the Son of God? Was it passages like this that led C. S. Lewis to describe Aslan as “not a tame lion.”

The disciples who witnessed the purging of the temple made a connection with Psalm 69:9, “Zeal for your house will consume me.” Don’t look at John 2 and ask first of all, what can I take home from this passage. It is intended first of all to tell you something about Jesus. He was utterly zealous for the proper worship in his Father’s house. Of course, if you are united to him by faith, the passage also calls you to be zealous for the proper worship of God. Be eager to worship and do it in the way that God commands. He is not pleased with our inventing what we think might be useful, pragmatic, or even beautiful.

The reaction of those who had allowed this commercialization of the temple was critical. They demanded that Jesus perform a sign to authenticate himself as a true prophet, perhaps as the messenger of the covenant, of whom Micah had written. The only “sign” that Jesus gives is the words, “Destroy this temple, and in three days I will raise it again.” The leaders take the response in a crassly literal way. Herod’s temple, in which they were standing, had been under construction for 46 years and was still a work in process. How could Jesus possibly rebuild a destroyed temple in three days!? John explains what he and the other disciples later came to realize: Jesus was speaking of his own death and resurrection.

Because Jesus is the Lamb of God who actually takes away the sin of the world, because he is the purifier of his people, replacing the water in the stone jars used for ceremonial cleansing, he is also the true temple. Once his sacrifice is completed, once he has died and been raised, the need for a physical temple is gone. The glory of God bursts out into the world. As G. K Beale writes, “Christ’s reason for referring to his resurrection as a ‘raising up’ of the temple is that the purpose of the old temple all along was to point symbolically toward the time when God’s special revelatory presence in the old temple would break out of the holy of holies and fill the entire new creation as his cosmic temple.” (A New Testament Biblical Theology: The Unfolding of the Old Testament in the New, p. 633).

Almost in passing John adds in verse 22 an important note about the growth of faith in himself and his fellow disciples. They took the puzzling saying of Jesus about destroying and raising up the temple and thought about it–as Jesus had intended. It could not possibly mean what it seemed to say, so they continued to turn it over in their minds. It was not until after the resurrection of Jesus that they had their “Aha!” moment, that they finally understood. Absolutely crucial to understanding who Jesus is, essential to seeing him as the true temple, is his death and his resurrection. Here near the beginning of his Gospel which explains who Jesus is and what he came to do, John frontloads his book with an emphasis on the resurrection. You can learn some things about the importance of true worship from John 2. But make sure that you have had that “Aha!” realization that Jesus has risen from the dead, that he is the true temple, and that you are in him. All the rest follows along quite naturally.