The Seeing Blind and the Blind Seers 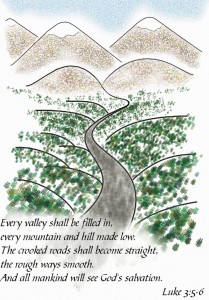 Are you one who once was blind, but now can see? Or do you think that you can see, but really are blind? As Jesus heals the man born blind and then calls him to believe in him, he makes clear in John 9:35-41 that you are one or the other.

Jesus asks the formerly blind man what has been described as the most important question that can ever be asked, “Do you believe in the Son of Man?” What brings that man to crying, Lord, I believe!” and falling before Jesus in worship? John, who tells you that he is selective in what he records in his Gospel, describes in detail a pair of encounters between Jesus and the man born blind, and, sandwiched between them, a series of interviews with the Pharisees, each increasing in intensity.

The interviews between the Pharisees and the man born blind (and his parents) serves at least two purposes. On the one hand, you see this man progress in his understanding of who Jesus is. In response to initial questioning about his healing, he had spoken of “the man they call Jesus” v. 11. Then when the Pharisees surprisingly ask him his view of Jesus, he responds, like the woman at the well of Samaria, with “He is a prophet” (v. 17). In the middle of those conversations he is challenged to declare that Jesus is a sinner (because the healing took place on the Sabbath). He affirms, “One thing I do know. I was blind but now I see!” There is a lesson for us there. We do need to be careful that our efforts at witnessing focus on the Savior, and not just on our own conversion experience. But, especially as you understand that Jesus gives sight, not just to the eyes of the man born blind, but to his inner being as well, there is room for us to make the same bold affirmation: One thing I know. I was blind but now I see!

Near the end of the confrontation with the Pharisees the now seeing man boldly affirms that the one who gave him sight comes from God. That leads to his expulsion from the synagogue, after which Jesus finds him. (John is preparing to introduce Jesus in John 10 as the shepherd who seeks the lost sheep.) Jesus describes himself as the Son of Man. We don’t know how much prior understanding of Daniel 7 and other messianic passages, such as Isaiah 61. But his action in worshiping Jesus makes clear that he has come to know that Jesus is God. Herman Ridderbos comments: “The entire course of the conversation proves what it means to ‘believe’ in the Son of man, namely to believe in him who as the Son of man has descended from above, who reveals his glory in ‘the flesh,’ who dwells and lives among people, who has been ‘seen’ by them with their own eyes, and who has spoken with them person to person. . . . To believe in ‘the heavenly one’ is to fall at his feet as the one who descended from heaven, the incarnate Word.” (The Gospel of John: A Theological Commentary, p. 349). John records this miracle and the related conversations in detail to draw you to the same worshiping response.

The interviews of the formerly blind man by the Pharisees (we might better call them “interrogations”) also highlight the increasing hardness of heart of the leaders of Israel and their growing opposition to Jesus. A sticking point is that this miracle took place on the Sabbath, violating Pharisaic regulations about what could or could not be done. Rather than taking this miracle as a prompting to reexamine their traditions, the Pharisees use a two-pronged attack. First they try to deny that a miracle took place, even interviewing the man’s parents, who, unfortunately for the interrogators, affirm that this man is their son, and that, though he now sees, he was born blind. The second tactic is an attempt to label Jesus a sinner for healing on the Sabbath. Their repeated questioning leads to the ironic, even sarcastic question from the man, “Do you want to become his disciples too?”! Of course the leaders cannot tolerate this man with his commitment to Jesus, and he is expelled from the synagogue. The opposition to the blind man is ultimately opposition to Jesus.

In speaking to the healed man (and to some Pharisees who have appeared on the scene) Jesus says, “For judgment I have come into this world, so that the blind will see and those who see will become blind” (v. 39). Blindness from birth had imprisoned the man in the limits of what he could hear and touch. Suddenly Jesus had not only given sight to his eyes, but had graciously enabled him to see, to truly see, Jesus for who he is, the glorious Son of Man. The problem of the Pharisees, who could see with their eyes, was that they were blind to their own need. Their problem was not primarily their sin (no sin is too great for Christ to forgive), but their assumption that they had no need for the Light of the world. Again, Ridderbos puts it well: “It is not sin that cuts a person off from what Jesus wants to give; it is the illusion that one can manage without Jesus as the light of the world” (p. 351).

Can you affirm, “I was blind but now I see”? If so, worship the Son of Man.