The Promise of Christmas 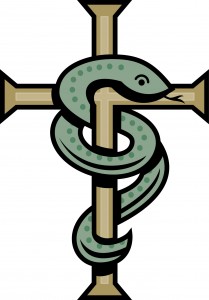 A season of celebration can be difficult for many who are wrestling with very real losses and problems. The very first promise of the coming of the Messiah (Genesis 3:14-15) arrived in the context of bitter disappointment, suffering, and death.

God gave his promise in the context of a curse. You need God’s promise because you stand guilty before him. God, as the righteous judge, questioned Adam and Eve, not because he needed information, but to bring them to see their guilt. The question, “Have you eaten of the tree of which I told you not to eat?” focuses on God’s command, and gives opportunity for clear confession and repentance. With your first parents, you are guilty. Adam was your representative. Your are involved in his guilt, but you also have added to his guilt placed on your account, your liability for all of the daily sins you commit. You and I stand with Adam and Eve.

Sin always has consequences. God pronounced curses because of sin. The serpent was cursed above all animals. We don’t know much about serpent physiology before the fall, but the curse did mean that the snake would be the object of degradation and hatred. The curse on creation, vv. 17-19, shows that there is something drastically wrong with creation, see Romans 8:20-22. This curse contains a measure of common grace. It helps keep the world from being as bad as it can be.

The ultimate object of the curse was Satan. He is the one cursed directly (Eve and Adam are affected by curses, but are not cursed directly). The curse relates to and affects Adam and Eve and all of their sons and daughters. The grief, pain, suffering, loss, and frustration we experience is the result of the curse. It strikes all of us, young and old, alike. When you see the effects of the curse, appreciate more clearly the need for the Savior. Understand how cosmic his work truly is.

But God does not leave you hopeless! God promised the woman a victorious offspring. God placed enmity between the woman’s seed and the serpent’s seed. God takes the initiative. He doesn’t leave us in the middle of the problem of our sin. He doesn’t just stir up enmity, he establishes it. In the context of the curse, God provides a promise. It is when you are most aware of your helplessness, your frailty, and above all, your sin, that you see most clearly your need of a deliverer. Vos writes: “As the climax of the struggle the serpent’s seed will be represented by the serpent, in the same manner the woman’s seed may find representation in a single person. . . . It sufficed for fallen man to know that through His divine power and grace God would bring out of the human race victory over the serpent. In that faith could rest.” (Geerhardus Vos, Biblical Theology: Old and New Testaments, p. 55).

The promise of Christmas is part of an ongoing conflict. The woman will have a descendent, and God will place enmity between him and Satan. The rest of Scripture describes that conflict. It is there in Egypt when the infant boys are thrown into the Nile, it is there when David is tempted and sins, when Judah is led into captivity, and when Herod strikes out at the babies of Bethlehem. Understand that everything you do happens in the context of this conflict. It either advances the kingdom of the Seed of the woman, or it contributes to the darkness of the seed of the serpent.

The historicity of Adam and of the fall is widely denied today, even in circles that call themselves “evangelical” (whatever that means today). But the Bible inexorably connects the first Adam with the Second. Without a historical fall into sin, the promised redemption becomes simply figurative and ephemeral. John Murray writes: “Familiarity is too liable to obscure the significance of what occurred some two thousand years ago. Something astounding occurred, something without precedent, without parallel, without repetition. It was one unique, incomparable event. It was the coming of the Son of God in human flesh into the world of sin and death. Our minds stagger when we think of the marvel of the condescension and conjunction, the God-man combining all the attributes of deity and all the attributes of humanity in one person, and as the God-man condescending to the lowest depths of humiliation conceivable.” (“The Relevance of the Historical,” Collected Writings, Vol. 1, p. 338).

Trust the seed of the woman, who has overcome. This is the promise of victory for mankind in Christ. The Seed (Offspring) of the woman will crush the serpent’s head (though in so doing his heel will be wounded). The reference is to Christ’s crucifixion, a seeming defeat for him, but ultimately the event which decisively overcomes Satan. The victory is not for Christ alone, but for all whom he represents. In promising that Seed, the Lord was inviting Eve, Adam, and you to trust the One who would crush Satan’s head. He gives hope to all who depend on him.

That hope-giving promise of Genesis 3:15 has blossomed into fulfillment in the birth of the Savior. The anticipation of victory has melted into his death in our place and the triumphant glory of his resurrection. The hope of his first coming has moved into the certain anticipation of his return in glory.

The question of which traditions you use to celebrate Christmas this year is relatively unimportant. After all, the Bible does not command us to observe a particular day to remember the wonder of the incarnation and birth of Christ. Even how you feel is of secondary importance. What is vital is what God promised so long ago–and has brought to fulfillment–the giving of his Son to gain forgiveness, reconciliation with God, and victory over the forces of darkness, all for you who trust him. God offers him as the one in whom you can put your hope today!