The Power of God’s Word 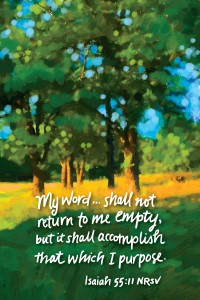 Recognize the Word made visible. God vindicates his Word as Paul suffers no harm from the snakebite. God had graciously given Paul the lives of his shipmates. Now God’s care for his messenger is tied to the Word he represents. In some ways Elijah had held a similar role in the Old Testament. Malta had been named by ancient Phoenician sailors as a place of refuge. Paul and his party find it aptly named. The local inhabitants (barbarians to the Greeks and Romans) provided warm hospitality with a fire for the shivering castaways. Paul once again is helpful, this time in gathering wood to feed the fire. When a viper, accidentally gathered with the wood, fastened itself to Paul’s hand, the local inhabitants assumed that the goddess, Justice, having failed to punish him in the storm, was now claiming him. But when Paul remains unharmed after shaking the reptile into the fire, they conclude, as Luke reports humorously, that Paul must be a god! (Contrast this with Paul’s reception at Lystra, Acts 14.) Paul is not divine, but he is under special protection as God’s messenger. “It was obvious to the islanders that divine vengeance was pursuing Paul: although he had escaped from the shipwreck, he was now going to die from the bite of a poisonous viper. They expected his hand to swell and waited for Paul to drop. And, indeed, Paul’s life was very much in danger. However, he was the bearer of Word of the Lord and his mission was still to proclaim that Word in Rome. Therefore he was safe under the protection of the Word of the Lord. His life was spared by yet another miracle of God.” (S. G. DeGraaf, Promise and Deliverance, Vol. 4, p. 241). God had promised that Paul would preach the Word at Rome, and nothing could stop that. As in Isaiah 55, God’s Word cannot return to him empty or void.

The Word is revealed in miracles of healing on Malta. Paul and some of the party are provided shelter in the home of Publius, the chief official on the island. Paul heals his father, not by magic, but after prayer. The Word proclaimed brings life and restoration. This miracle, like those performed by Jesus, is not only an authenticating sign, but is a visible form of the Word proclaimed. The good news is spoken—and the curse on sin is rolled back. The rest of the sick on the island gather and were cured. Did Luke’s medical training bear fruit in this?

The Word is made evident in the Word made flesh. Jesus Christ is the ultimate revelation of God. He is the Word made flesh, John 1. He is the One who is God’s definitive speech, Hebrews 1:1-4. It is ultimately for the sake of the Jesus whom Paul proclaimed that Paul was spared from the storm and the snake.

Thus, trust the power of God’s Word. Rejoice in the saving power of the Word. The God, whose ways are sovereign, will not allow Paul to perish by the waves or a snake’s venom. He vindicates his servant and authenticates his message. Don’t long for the “good old days” when God worked those kinds of spectacular miracles. See his power and grace as Jesus comes to you in the reading and preaching of the Word. As you come to the Table at which he is the host, recognize that through the mysterious working of the powerful Holy Spirit and by faith you are truly feeding on Christ. Your life, no less than Paul’s as he swam to the beach on Malta, must be lived by the grace of God and by faith in Christ. The power of the Word that Paul proclaimed is available to you when you are discouraged. It can strengthen you when you are tempted. It is in that Word that you come to Christ.

Respond with a life of obedient faith. Luke does not describe in detail the impact of the gospel on the lives of the Maltese. As you compare Paul’s activity here and the grateful reception with the impact of his preaching elsewhere, it is hard to imagine that the positive response is not the result of true faith in at least some of his hearers. Luke’s description of them is positive and favorable, reflecting the way that converts earlier in Paul’s missionary journeys had helped him on his way.

God’s Word not only commands a response, it always has an effect. It never returns to God empty. Sometimes the effect is adding to the hearer’s condemnation. Frequently, by God’s grace, the effect is those who are hungry and thirsty coming to the living water and finding food, drink, and forgiveness. The Word summons you to a response. The Word that you read in your private and family devotions, the Word that you hear preached, the Word that has a visible form in the Lord’s Supper, all call you to faith, a living, active faith that involves covenantal obedience. That Word, as the powerful Holy Spirit uses it, has the power to break sinful habits. It has the strength to comfort you. It has the grace to challenge you to closer fellowship with God.

The Word of God may seem insignificant in a high-tech age. The church that proclaims it may appear as unimpressive as a half-drowned apostle. But the Word of God has a way of making an impact, of changing live, of displaying the power of God. Thank God that his Word does not return to him empty!