The Potter and the clay 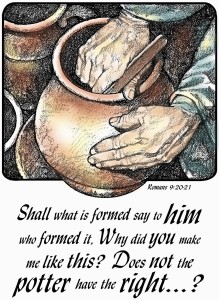 Parents recognize backtalk when they hear it.  And children also recognize when they are guilty of speaking it.  Why not tolerate it?  Because backtalk undermines the basic structure of authority which God has established in the home.  If it is wrong to engage in backtalk to parents, how much more to do so to God!

What right does God have to have mercy on some and to harden others, as he did to Pharaoh? That is the substance of the question that Paul raises in Romans 9:19, as he anticipates objections to his description of God’s sovereign grace and judgment in the preceding verses.  In our text, Romans 9:19-24, Paul responds to that question.
How does he answer?  Not by going into a philosophical argument about good and evil.  It is not as though we could haul God before some standard outside of himself and accuse him there.  Paul answers the question of the skeptic with another question: “Who are you, O man, to answer back to God?”  The majesty of God demands reverential silence.  Note the contrast between “O man” and “God.”
He expands by using the language of Isaiah 45:9 (and other passages) to remind you that the potter has absolute power over the clay (and the clay has no grounds for complaining).  Thus God has absolute power of the creatures he has made.  To complain against God, whether outwardly in words, or in the attitude of your heart, is to be involved in backtalk – – backtalk against God.  Paul does not give you a reason for God’s actions, but simply reminds you of who God is.  God’s sovereign right as Creator is full control over his creatures.  You may cry out to God, “Why?” as you go through troubles (read the Psalms).  But there is a difference between persistent prayer, which may include a deep seated attempt to understand God’s ways, and demanding that God answer to you for what he does.
Do you struggle with the idea of the Potter making some pots for dishonorable use?  Remember that God is dealing with mankind, not simply as men, but as sinful men.  Without detracting from his sovereign choice, keep in mind that the Word of God ties judgment together with sin and rebellion against God.  As has been said, God is ultimately behind both grace and judgment, but asymmetrically so.
Although Paul does talk of God’s judgment, his emphasis is on God making known the riches of his glory for vessels of mercy.  While the vessels of wrath can be said to have fitted themselves for destruction (Pharaoh hardens his own heart as well as God hardens it), here God alone is the agent.  God alone displays his mercy.  You, its recipients, are those whom he has prepared for this.  This is no cheap grace.  God purchased it at a cost no less than the life of his Son, whom he sent into the world to be your Redeemer.
Paul keeps pushing you away from any grounds for thinking that you have earned favor with God.  When you appreciate that his mercy is truly that – – undeserved favor to those who deserve eternal judgment, you can appreciate that he has called Gentiles as well as his Old Testament covenant people, Israel to be his new people in Christ Jesus.
Why talk about God’s sovereign plan?  What practical impact, if any does it have on your life?  Well, understanding who God is helps prevent you from falling into backtalk against God.  The authors of the Westminster Confession of Faith conclude Chapter 3 “Of God’s Eternal Decree” (one of the finest summaries of the teaching of Scripture on this important subject), with a very pastoral, practical section: “The doctrine of this high mystery of predestination is to be handled with special prudence and care, that men, attending the will of God revealed in his Word, and yielding obedience thereunto, may, from the certainty of their effectual vocation, be assured of their eternal election. So shall this doctrine afford matter of praise, reverence, and admiration of God; and of humility, diligence, and abundant consolation to all that sincerely obey the gospel.” (WCF 3.8)
In other words, don’t speculate and doubt. Instead of backtalk, fill your lips with praise to God and your heart with reverence and admiration of him.  Give thanks that he made his glorious grace evident in choosing you and drawing you to himself. Paul writes so that you give thanks and praise to God for what he has done in Christ Jesus.  Paul writes so that you may have deep assurance that God, who has drawn you by his grace in Christ, will never abandon you.  God’s word does not fail!