The Order of the Towel 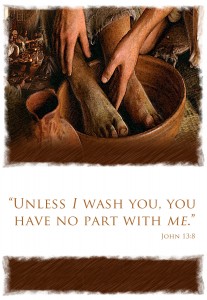 What is real, genuine love? If you want to know, look at Jesus as he picks up a towel, recorded in John 13:1-17. I wish I could claim originality for the title, but remember that Jesus, in taking the towel himself, summons you to join the order of the towel.

Jesus shows the full extent of his love–by taking up a towel. Washing his disciples’ feet showed that his time had come to leave the world and return to his Father. He is showing them the path that will lead to his glory. His going to the Father includes taking off his outer garments, wrapping on a towel, and humbly washing feet–just as it will involve being beaten, crucified, and mocked. Going to his Father means doing his Father’s will–and so he does it, doing the humble work of a slave, the task that not one of the disciples had been willing to lower himself to undertake.

Self-conscious of who he is and of his role, he loves his disciples to the end. The term reflects the extent of his love and has a temporal force as well. Mysteriously, the love he is reflecting is not only his own. He is teaching you something profound about the Trinity. How can the Son love his own the way he does? Because, as he explains after the act, the messenger is not greater than the one who sent him. In washing feet Jesus is acting out the love of the Triune God.

As he takes the towel, Jesus summons you to do the same. He is not talking about a ceremony to be conducted occasionally, particularly on Maundy Thursday, but of something that should control each moment of your life. Edmund P. Clowney wrote:

In the gospel of the cross, grace and glory are joined together. Paul learned that Christ’s power was perfected in weakness. Peter calls on the church to gird on humility like an apron, just as Christ set aside his robe, tied a towel around his waist and washed the disciples’ feet (1 Pet. 5:5). Jesus took the towel, knowing who he was, from where he had come, and where he was going (Jn. 13:3). Secure in that knowledge, he was untouched by the defensiveness of insecure pride. So, too, the knowledge of glory equips us to serve: first as sons in the Son, then as servants in the Servant. With the cry ‘Abba, Father’ on our lips, we can take the towel as Jesus did. (The Church, p. 62)

Jesus washes feet so that you should do as he has done, v. 15. How do you learn to do it? Parenting is one way. What kind of foot washing do you need to do? Vv. 34-35 point you in the right direction.

Jesus is not only teaching you to take up a towel. He is also showing how the Son of Man will be glorified. His footwashing bears on all three of his offices.

Jesus as Prophet washed feet. Love is not just an emotion. It is not just reciprocating the feelings of someone else. The source of love is the point where the justice and mercy of God meet. It come from God, not from man. Jesus as Prophet is teaching you that your love has to have its beginning at the cross on which he was about to suffer. It is not first of all a feeling. It is action, action directed to the undeserving. What Jesus tells you about love shifts the way you relate to family members and neighbors.

Jesus as King washed feet. In explaining his action Jesus affirms his royal title. He is Lord, v. 13. Caesar may be the king on the throne of the Roman empire and as the August emperor may claim the worship of his subjects. The King washing the feet of his disciples makes visible what he puts into words to Pilate–his kingdom is not of this world. In some area you have authority, royal authority as a new creation. How do you use your authority? Jesus is washing feet. He is calling you to humble service, no matter how broad or narrow your area of responsibility is. Children have to learn that its not all about me–and adults need the same lesson.

Jesus as Priest washes your feet. Jesus with towel and basin, Jesus busy washing feet–it should have been obvious that this had ties to the ceremonial washings that were part of the work of the priests. The Book of Leviticus pounds into you that you are polluted and need cleansing–and here is the Lord with a basin and pitcher. But the disciples, Peter in particular, miss it. We often focus on the death of Christ as a substitute, dealing with the guilt of our sin. But the basin in Jesus’ hands reminds you that he also deals with the pollution of your sin. In washing feet, Jesus is describing an aspect of his work the next day. Klaas Schilder writes:

Not the justification only which takes place once for all, but the sanctification constantly being realized in us, as well, proceeds from Christ. See, He is washing feet! Not regeneration only but continuous repentance also, not only the root but also the branch and foliage and blossom and fruit proceed from Christ. Lo, He is washing feet! Such is the perfect mediatorship. The cross as a single redemptive event would not suffice without the washing of feet which points to the repeated gift of the promise and which repeatedly applies the strength of grace. (Christ in His Suffering, pp. 224-225)

Embarrassed Peter misses the point. You, my feet? Never, to the end of the age! Lord, no!Pride keeps you from the cleansing that Jesus offers. Instead of Peter’s Lord, No!, cry, “Lord, Yes!” Jesus does cleanse you entirely. You have eternal life because as you believe in him you are born of water and the Spirit. You continue to need the washing Jesus offers. You need to find your continued forgiveness in him.

How do you join the order of the towel? Jesus tells you that you need to know these things. And then you will be blessed if you do them.