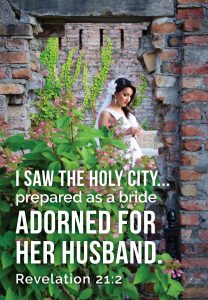 See the new Jerusalem. The magnificence of the city is overwhelming. John is taken by one of the angels to a high mountain (recall mountain top meetings between the Lord and his people). The scene contrasts with the wilderness of Revelation 17:3, from which John views the fall of another great city, Babylon. The overwhelming impression is light—reflecting the glory of God. The brilliance is compared to jasper, normally an opaque stone, but here, clear as crystal. The jewels bring to mind the breastplate of the high priest, each bearing the name of of one of the tribes of Israel, which the high priest wore as he entered the tabernacle and later the temple, Exodus 28. The measurements are symbolic—12,000 stadia. That is about 1,400 miles. If one corner were in Newberg, another would be in Minneapolis. The width, length, and height are equal (that would put the top of the city in the area of some satellites). The cube shape is significant, reminding you of the much smaller Holy of Holies in the tabernacle and later in the temple. The foundations are jewels, and each gate a pearl. The street is gold, but gold that is transparent as glass. The city is one of overwhelming, indescribable magnificence, because God is there with his people. And the city is the bride of the Lamb. You can’t draw a sharp distinction between the city and the people who make up the city.

Why the 12s? Notice how many different ways the number 12 is used, directly or in multiples. John identifies it with the 12 tribes of Israel, and with the 12 apostles. As in Revelation 7, where you have God’s people described as 12 tribes numbered at 12,000 each—but then as an uncountable host, so here the emphasis is on the completeness of God’s people. Though the context makes clear that not every individual is in the new heavens and earth—there are those who are punished in the lake of fire, what you have here is a redeemed humanity. God’s people are complete, and the focus is on the great number. And they are the bride of the Lamb because he has given himself for her. You need to try to see the church in the way that the Lord sees her. “Revelation shows the lengths to which the Lamb has gone and will go to make us the holy city in whom he will dwell forever. Christ loves his church and binds himself to her with bonds that no enemy from without and no failure of ours from within can sever.” “When we glimpse the bride through the eyes of her Groom, it lifts our head in hope and calms our frustrated hearts for persevering love for one another.” (Dennis E. Johnson, Triumph of the Lamb, p. 342–3).

Enter the new Jerusalem. God is with you. Don’t get so caught up in the magnificence of the city that you overlook what is most important. The shape of the city brings to mind the Holy of Holies, but that was a most protected place, which only the high priest could enter, and he only once a year. Here there is no temple, for the Lord God Almighty and the Lamb are its temple. Nor is there any need for sun or moon, but the Almighty and the Lamb give light. Sinners were excluded from the heart of the temple, but here there is free access to God, for sins have been forgiven, God’s people have been cleansed. When you focus on heaven, and beyond that on the new Jerusalem, don’t think first of all about meeting departed loved ones, or on the streets of gold. Rather, the focus of your attention will be God in all of his redemptive glory.

The glory of the nations is brought into the city. We may not understand exactly how the good and glorious things of the nations are brought into the new Jerusalem, but they are. John seems to be suggesting that there is a greater connection between our current situation and the new earth than we sometimes realize. As you get into Revelation 22 you are reminded of Eden, as we will see. But the new Jerusalem is not just something primeval. It is a great and magnificent city. And the best of what the nations have, doubtless somehow purified and perfected, as will be true of us there, will be brought into that great city. “All Old Testament concepts shed their external, nationalistic-Israelitish meanings and become manifest in their spiritual and eternal sense. . . . [T]he New Testament itself has given to the particularistic ideas of the Old Testament a universal and cosmic meaning. (Herman Bavinck, Reformed Dogmatics, Vol. 4, p. 661). “But in the new heaven and new earth, the world as such is restored; in the believing community the human race is saved. In that community, which Christ has purchased and gathered from all nations, languages, and tongues (Rev. 5:6; etc.), all nations, Israel included, maintain their distinct place and calling (Matt. 8:11; Rom. 11:25; Rev. 21:24; 22:2). And all those nations—each in accordance with its own distinct national character—bring into the new Jerusalem all they have received from God in the way of glory and honor (Rev. 21:24, 26). (Bavinck, p. 720).

The new Jerusalem is your city! The city is God’s city to be sure. It is his presence that makes it what it is. But John carefully points out that it is also your city. Those whose names are written in the Lamb’s book of life live there. The glory of the new Jerusalem is not just a hope that is so distant that it makes little difference. Rather, keep in mind that Revelation is written to suffering Christians. The hope that Christ holds out for his people in the seven churches is the comfort of this glorious final existence. His victory is not just a temporary one. It is not just snatching individual believers from the fire. It is the perfection of the church, the renewal and recreation of all things. The holy city is the place where God dwells with you and you dwell with God.

Jesus is assuring you who trust in him that he holds you in his hands. He has gone ahead of you. He is not just preparing a place for you, which he is, but he is preparing you for that place. He is the Lamb that was slain, and you share in his sufferings—but he wants you to lift your eyes to the reality of what he is giving you, something that in a real sense belongs to you now—though reaching the new Jerusalem is something still future for us. As you keep your eyes on him in his glory you have the strength to walk daily with him, no matter how difficult the path.