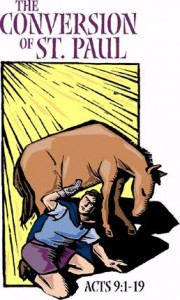 If you were a Christian in Jerusalem in the mid-first century, whom would you pick as the greatest enemy of the church? Acts 9 describes the transformation of Saul of Tarsus into Paul the Apostle.

The Lord chooses his instruments, and when he does so, he chooses the unlikely. Saul was a violent persecutor of the church (Acts 8:3; 9:1. 22:4; and 26:9-11). Perhaps he saw himself, Phineas-like, turning away the wrath of God by his zealous obedience, Numbers 25 and Psalm 106:30. He may have looked at the method of the death of Jesus, and, on the basis of Deuteronomy 21:23 decided that this was proof that Jesus was under God’s curse.

As he is on his way to Damascus to seize more Christians for punishment and prison, the Lord graciously intervenes. Glory light from heaven, reminding you of the pillar of cloud and fire and of the vision of Isaiah, surrounds him. He is struck to the ground, and the Lord speaks to him.

The blindness of helpless Saul reflects his spiritual condition until the light of the gospel shines in his heart. Teh Lord sends a disciple named Ananias to lay hands on him and restore his sight. You can appreciate the hesitation of Ananias! Saul’s conversion is marked by his baptism.

The Lord chooses you to carry his name. Why is the account of Saul’s conversion recounted two additional times in Acts? It marks a crucial turn for the church, a subordinate Great Commission. Paul will be the apostle to the Gentiles. The strong right arm of the Lord is lifted in defense of the suffering church—but instead of striking Saul dead, it summons him to become the bearer of his name! The commission Paul began to carry out continues to be the orders of the church today.

God equips those he calls. Paul, who had received intense rabbinic training, would undergo graduate work in Arabia and an internship in Tarsus (Galatians 1:13-24). Although late, he was an eyewitness of the risen Lord, 1 Corinthians 15:8. Your calling to serve Christ may not be as dramatic as Paul’s but he has called you to himself to serve, to make known his name, and to live as his people. He equips you with what you need.

Notice that the Lord is with his people. The heavenly Lord identifies himself with his suffering people. Christ’s question to Saul is not, “Why do you persecute my church?” but, “Why do you persecute me?” The connection between the head and the body is so close that the blows delivered on earth are felt in heaven. That concept of union with Christ would have a profound impact on Paul. It colored the way he viewed his own suffering, Colossians 1:24. It structures the crucial concept that comes out in his letters, that central idea of union with the crucified, risen, ascended Lord.

This Lord calls you, as he did Paul, to suffer for his sake. As Paul states in Romans 8, union with Christ means union with him in suffering as well as in glory. The Savior, the second Adam, underwent unimaginable suffering for you, his people. Paul would face great suffering in his work as an apostle, as Luke will describe. You too, are called to suffer, Philippians 1:29. The Christian life, lived as one who really belongs in glory, but is living in a fallen, sin-cursed world, is a life of suffering. But it is a life united with Christ. “In pursuing and destroying the ser­vants of Jesus, Saul was persecut­ing Jesus himself. The identification of the Lord with his servants, so forcefully impressed upon Paul through Jesus’ challenge, would be revealed even more fully through Paul’s later expositions of union with Christ and of the church as the body of Christ.” (Dennis E. John­son, The Message of Acts in the History of Redemption, p. 111).

There is suffering, but that is not the final word. Luke concludes the section in verse 31 with a reference to the peace and blessing the church enjoyed. That time anticipates the glory that lies beyond the suffering. You, the church, no less than Paul, are Christ’s chosen instrument.