The Lord Is in His Holy Temple 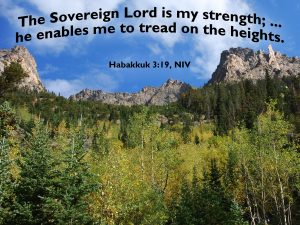 As you go through difficult times you may be tempted to ask, “Where is God?” Where was he when my child died? When my spouse abandoned me? When I heard the big “C” word? Psalm 11 provides you an answer.

Should you be discouraged? Even the faithful may be tempted to flee. The Psalm begins with Davis’ affirmation of trust in the Lord. We know that is where we ought to turn when discouraged, but is there any real grounds for hope there, or are we whistling in the dark? We may not know what personal crisis David was facing, but the ambiguity makes it easier for us to identify with his situation with those in our lives. In that setting the advice isf flee!

That may seem like logical advice, because the wicked do threaten God’s people. Satan attacks the kingdom of God. Evil men are attacking the godly. Behind this conflict is the battle of the two kingdoms. The battles are sometimes open persecution. But the attacks on your soul, the sinful desires (1 Peter 2:11) are an even more dangerous threat. The foundations are destroyed! Whether verse 3 is part of the message of David’s advisers, or whether it is his own reflection, the situation is bleak. Wickedness may seem to triumph for a time—it may indeed prevail in the short run. There are times when the foundations of a culture and even of a civilization are destroyed. Christians may look at the political scene in North America and come to similar conclusions. But this is not the first time God’s people have seen cultures crumble. Think of Augustine as he wrote The City of God. Don’t let those problems make you lose heart.

What is the answer? The Lord is in his holy temple. The Lord’s throne is in heaven. You might think initially of Solomon’s temple, but this Psalm is earlier than that. Although the word can refer to the Tabernacle, David seems to be looking higher. His holy temple is the location of his heavenly throne. The Psalmist reminds you that God is in control. He does judge the earth. Yet that heavenly throne has an earthly counterpart. The Lord is present among his people. Peter, writing to suffering Christians, reminds you that you are the temple of the Lord. The Immanuel principle is a reality. Because God is with us permanently in Christ Jesus, his people, those who trust in him, those who walk by faith, become his living temple. The throne is not just a place from which to administer bureaucracy. Rather, it is the location from which the Lord exercises his righteous, discerning judgment. The Lord’s judgment falls on the wicked. The description recalls the destruction of Sodom and Gomorrah. That warns rebels against God, but comforts those who are being abused by the foe. “He does not simply say that God dwells in heaven; but that he reigns there, as it were, in a royal palace, and has his throne of judgment there. Nor do we indeed render to him the honor which is his due, unless we are fully persuaded that his judgment-seat is a sacred sanctuary for all who are in affliction and unrighteously oppressed.” (John Calvin, Commentary on the Psalms, Psalm 11).

See the face of your righteous Lord. The Lord loves righteousness. Righteousness is essential to his character. He redeems his people with the purpose of making them a righteous people with which to have fellowship. The righteous Lord summons you to live in fellowship with him. The character of the God, whose temple you are, demands holiness. You see the very face of the Lord.

Your God is in control. He is present with you—permanently in Christ Jesus. Take refuge, not in the mountains, but in his presence.