The Light of the World 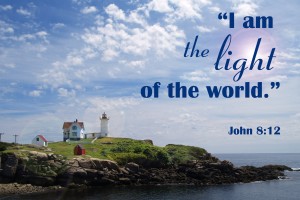 The people of Israel, newly delivered from Egypt, were terrified. God had led them out of Egypt, but then Pharaoh had changed his mind about letting his slaves go. His army pursued them, trapping them against the shore of the sea. It was night, and while God opened a path through the sea for his people, the pillar of cloud and fire which had led them moved between Israel and the approaching Egyptians. It provided light to Israel as they started through the seabed, while darkness kept the army from overtaking them. The pillar of cloud by day and fire by night continued to lead Israel through the wanderings in the desert as they journeyed to the promised land (see Numbers 9:15-23). Follow the cloud! Follow the light!

The Feast of Tabernacles recalled the light of that cloud and had celebrated it with the lighting of massive lamps set up on posts 75 feet high in the Temple courts, according to rabbinic commentary. The light of those lamps reportedly shined into every courtyard in Jerusalem. With the memory of the recent feast in mind, Jesus, in John 8:12, utters one of his great “I am” sayings: “I am the light of the world. Whoever follows me will never walk in darkness, but will have the light of life.”

Jesus’ words sound familiar, but don’t let that conceal their profundity. What led Israel was not a meteorological phenomenon, but rather a theophany, an appearance of God in visible form. Throughout the Old Testament God reveals himself in light: Psalm 27:1; 36:9. The promised Messiah comes as a light: Isaiah 9:1-2; 42:6-7 (note the “truly” sayings in John 8 as they deal with slavery and death); 60:1-2, 19. In this “I am” saying, Jesus is claiming to be God himself! The Savior who stood in the treasury area of the Temple had stood between Israel and her enemy. This verse, and the rest of the chapter, lead up to John 8:58.

Jesus underlines his claim as he deals with the objection of the Pharisees that his testimony is invalid because he is his own witness. Jesus cites the requirement of a plurality of witnesses (Deuteronomy 17:6), and retorts that his other witness is the Father who sent him. He repeatedly affirms that he speaks what his Father says. All that God is, Jesus Christ is! The failure to believe is not lack of evidence, but self-deception (John 8:23). Only the self-induced blindness of sin can make people refuse to see. Jesus is not a spark, a reflection, a secondary source. He is the light.

Notice how broadly the light shines. He is the light of the world. The people of Israel were used to thinking of God as their illumination. But Jesus claims to shine, not just for Israel, but for the world. What John 1:4-5 had previewed is now being unfolded. His being lifted up (v. 27) would involve drawing all men to himself (see John 12:32).

If you are going to follow the Light of the World, you will be involved in shining that light in the dark corners. Some of those dark corners are found in Karamoja. But others are in your neighborhood, on your street.

Following Jesus is parallel to believing in him. More is involved than an act of the will or intellect. Israel in the wilderness reached the promised land only by following the cloud. In John 1 Andrew and an unnamed fellow disciple followed Jesus when the Baptizer pointed him out. Discipleship is not just a one-time decision, but a life of walking in the light, following Jesus, listening to his Word–in short, living your life in covenant with God. Whether God calls you to live in Uganda or in Oregon, whether you are a missionary or a construction worker, your responsibility is the same: to follow Jesus, to walk in the light which he is.

Walking in the light is the safe place to be. Contrast Israel preparing to cross the sea with the confused Egyptian soldiers stumbling in the darkness on the other side of the cloud. If you are following Jesus you never walk in darkness! You, united with your Savior, belong above, not in the darkness of this world. He leads you, no matter how dark the shadows in your life may seem at times. John Calvin unpacks the comfort of this verse: “For when we learn that all who allow themselves to be governed by Christ are out of danger of going astray, we ought to be excited to follow him, and, indeed, by stretching out his hand — as it were — he draws us to him. We ought also to be powerfully affected by so large and magnificent a promise, that they who shall direct their eyes to Christ are certain that, even in the midst of darkness, they will be preserved from going astray; and that not only for a short period, but until they have finished their course.”