The King is on the move! 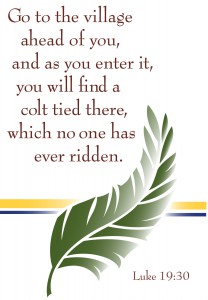 Running through much of The Lion, the Witch, and the Wardrobe is a note of anticipation. As talking animals move around more freely, as the snow of “it’s always winter and never spring” begins to get slushy, all of Narnia begins to realize that the Lion is on the move. C. S. Lewis has picked up on a theme that comes to expression in Luke 19:28-40: the King is on the move!

The great journey to Jerusalem began in Luke 9:51. Now Jesus enters the city as King. He claims kingly authority. Requisitioning the colt which had never been ridden expressed that authority. The young mule or donkey may have been an animal of peace (that is part of the point of the prophecy in Zechariah 9), but don’t despise the steed. Newly anointed King Solomon had entered the same city on his father, David’s mule. The disciples recognize the royal claim as they lay their outer garments on the colt for a saddle and spread their cloaks for a carpet to pave the royal way.

Jesus accepts this treatment, as well as the adulation of the crowd of disciples.

He is showing you, not only that he is King, but also what kind of King he is. He knows all things. Before reaching the next village he pauses, sends two disciples ahead, and tells them to bring the colt to him. He knows that they will be questioned. He instructs them how to reply. He knows that the colt will be given for his use.

Not only is Jesus claiming to be King, but he is forcing the hand of his enemies. The parable of the Ten Minas, just before the account of the triumphal entry, ends with a note of judgment against those who oppose the king (v. 27). And bracketing the story of the entry on the other side is Jesus weeping over Jerusalem and speaking of the destruction that will come upon it “because you did not know the time of your visitation” (v. 44). The movement of the King forces you to chose whether to submit and trust in him or to oppose him.

Within the account itself the Pharisees object to the cries of royal welcome and ask Jesus to silence his disciples. But Jesus responds that if the people were to be silent, the very stones would cry out. As Matthew Henry points out, “Whether men praise Christ or no he will, and shall, and must be praised (v. 40): If these should hold their peace, and not speak the praises of the Messiah’s kingdom, the stones would immediately cry out, rather than that Christ should not be praised. This was, in effect, literally fulfilled, when, upon men’s reviling Christ upon the cross, instead of praising him, and his own disciples’ sinking into a profound silence, the earth did quake and the rocks rent.”

Earlier Jesus had instructed people not to talk about his kingship. But now he makes his claim clear in such a way that conflict with the leaders of Israel must happen, and must happen on his timetable. They want Jesus dead, but not during the Passover feast, when the city is packed with pilgrims. But Jesus is going die as the Passover Lamb. His entry forces the hand of his opponents.

Notice the cries of the crowd. They use the language of the great messianic Psalm 118, and apply it specifically to the one they hail as King. (Luke, writing to a Gentile audience, does not use the word, hallelujah, which would likely not have been understood by them. But he does make it clear that this is the messianic King coming in the name of the Lord.)

The shouts of the people in v. 38 echo, probably unintentionally, the song of the angels in Luke 2. Notice the omission, however. The angels recognized that the coming of the Messiah means peace on earth. The cries of the crowd show no awareness of that need. But Jesus knows, as he has repeatedly made clear to his disciples, that he is going to Jerusalem to suffer, to die, and to rise again. The shallowness of the crowd’s understanding of Jesus’ kingship is one reason that, less than a week later, the cries will have changed to “Crucify him!”

Luke’s Gospel confronts you with your King. The King who entered the city on an unused donkey would, within the week be placed in an unused tomb. But from that he would rise again. Luke writes so that you recognize, not only that the King is on the move, but also the direction of his journey. Luke writes so that you join in blessing your King. Borrow the words of the crowd–they are fine words–but understand what they really mean. Remember the sacrificial death of your King. Focus on the glory of his resurrection.

Revelation 7:9-12 gives you another picture of this King, picking up the royal imagery of Psalm 118 and of the Triumphal Entry. Today, and for eternity, bless Jesus as your King!