The Good News about Jesus 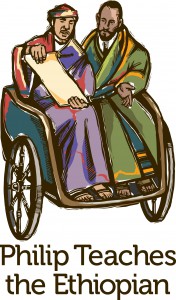 What are the barriers that stand between you and God? Luke’s account of the Ethiopian official in Acts 8:26-40 shows you God breaking down barriers with resulting joy at the good news about Jesus.

God brings the ends of the earth to himself. The Holy Spirit is at work. An angel of the Lord sent Philip to the road that goes down from Jerusalem to Gaza. Acts describes barriers falling. Acts 8 begins with scattered Christians fleeing persecution bringing the good news to the Samaritans, who had corrupted the worship of the true God. Philip’s initial preaching there is confirmed by an apostolic visit. Now God sends Philip to the south of the land of God’s people, on the road to Gaza, one of the five cities of the Philistines. A bigger barrier is about to fall as Philip is instructed by the Spirit to approach the chariot of an Ethiopian official traveling home from a visit to Jerusalem. The Spirit’s work in this incident will prepare for Peter’s preaching to the Roman centurion, Cornelius, and before that, Saul’s conversion and call to be an apostle to the gentiles.

The Spirit of the risen Christ is breaking down the barriers of the old covenant. The Ethiopian had traveled far to worship, but as a gentile, was restricted to the outer court of the temple at Jerusalem. His physical condition, depending on how specifically “eunuch” is used, may have prevented him from becoming a proselyte, Deuteronomy 23:1. Yet he longed to worship God in truth. He had purchased a scroll of the Scriptures and was reading as he rode. He was reading from Isaiah 53. A little further ahead in the scroll he would have encountered a prophetic encouragement,Isaiah 56:4-7. What barriers seem to separate you from God? The Spirit of the ascended Lord is tearing them down. John 12:32 speaks not only of Christ being lifted up on the cross, but also of his ascension as drawing people to himself.

Rejoice in God’s covenant grace. First, proclaim the gospel. The overheard words provided the perfect introduction. Although there is no record of messianic interpretation of this passage between Isaiah’s time and that of Christ, Jesus saw himself in the passage, and so taught his disciples after his resurrection. He hears the Ethiopian reading Isaiah 53; what an opportunity to tell the good news about Jesus!

Rejoice in the unifying work of Christ. Baptism sealed the union of the newly believing Ethiopian with the Savior. It is increasingly clear that God’s covenant grace is no longer limited to ethnic Israel. “The pilgrimage of this Ethiopian of­ficial to the house of God in Jerusalem—and even more so, his faith in the good news about Jesus—signaled the beginning of interna­tional expansion of God’s kingdom, predicted by ancient psalmists and prophets. . . .” (Dennis E. Johnson, The Message of Acts in the History of Redemption, p. 99). Unanswered questions remain: Why did the Spirit take Philip jest then? What happened to the Ethiopian? Don’t focus on the minor issues. The covenant people now include the Gentiles. Here is where the door was opened for those of us who are not the biological descendants of Abraham to come to the Savior.

Rejoice! God’s grace has reached out to you. Rejoice, and continue to make the good news known.