The God Who Called You 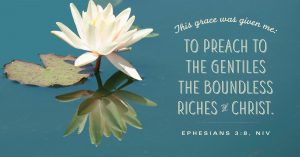 When did you become a Christian? (You may or may not know when, but the more important question is, Are you a Christian?) How did it happen? Few conversion accounts are more dramatic than Paul’s. In Galatians 1:11–23 Paul tells of his conversion because how he came to know Christ is crucial to defending the truthfulness of his gospel.

Respond to God’s call. God set you apart from before you were born. God is the author of your salvation. God’s plan is not simply based on fore-seeing who will love him, see Ephesians 1:3-6. God’s fore-knowledge is a choice made in love, Romans 8:29, 30; Amos 3:1, 2; Hosea 13:5; 2 Timothy 2:19. God’s setting apart goes back to birth, and even before, cf. Jeremiah 1:5. Isaiah 49 describes the call of the Servant, the Messiah. He is set apart for the Gentiles—and Paul recognizes that God’s call of Paul also has a focus on the Gentiles. God separated you from rebellion. Paul had been intense in persecution, v.13. He had been successful in the religion and traditions of the fathers, v.14. The point is that this is not where he had learned the gospel. The works religion of the Pharisees was not a gospel, not good news. Although you may not have been involved in the kind of rebellion that Paul was, you too are a rebel by nature. God has called you from darkness into the glorious light of the kingdom of his Son.

God graciously called you to himself. God’s calling is conversion. He has called you from sin to himself, 2 Timothy 1:9; 1 Timothy 6:12; Romans 8:29. God calls you to union with Christ, v.6. His call is effectual. It accomplishes what it sets out to do. When you respond, you do so because God has sovereignly worked to will and to do, Philippians 2:13. God calls you by his grace, v.15. Grace is a free, undeserved gift. The gift has come to you when you were dead in sin, a rebel by nature. The gift is free for you, but it cost the death of Christ. Salvation is of grace, undeserved, unearned—that is the message of Galatians. “The emphasis falls on the sovereignty of the divine grace manifested to Paul. At the same time, however, the apostle stresses the fact that God had much earlier — from his mother’s womb, as a matter of fact — appointed him for apostleship.” (Herman Ridderbos, The Epistle of Paul to the Churches of Galatia, pp. 62–63).

Respond to the call! When God calls, there must be a change in your life. Paul was transformed from being a persecutor into a bondservant of Christ. Similarly, God’s call to you changes the whole direction of your life.

God was pleased to reveal his Son. God revealed his Son in calling Paul to himself. Paul did not receive the gospel by ordinary means, verses 11,12. Its source was not human (the same is true for you). It was not from man, nor taught, in contrast with rabbinic theology, which focused on the teaching of particular rabbis. You receive the gospel by the human means God ordains, originally the apostles, the preaching of the gospel, the witness of family or friends, the printed page, or a message over the radio or TV. Paul received the gospel by direct revelation. Apparently this was identical with his conversion, or at least concurrent. The location was the Damascus road and the house of Judas on Straight Street. Paul is countering the charge that his gospel was second-hand. Paul did not consult human authorities. He did not go up to Jerusalem immediately, v.17. Rather he visited Arabia, perhaps for meditation, and possibly preaching. Saul of Tarsus had just had the whole structure of his life turned upside down. Only after three years did he visit Jerusalem, and then briefly, and with limited contacts, vv.18,19. Paul stresses the truth of his statement, v.20, and then describes his activity in Syria and Cilicia, significantly at a distance from Jerusalem, vv.21-23. “There is no preaching that is worthy of the name unless Christ is set forth in all the glory of his Person and all the fullness of his saving power.” (Geoffrey B. Wilson, Galatians: A Digest of Reformed Comment, p. 27).

God is pleased to do what he wishes. God’s pleasure or will is the cause. God’s pleasure is the expression of his sovereign will, acting in accord with his own glory. God’s pleasure was that Paul would preach to the Gentiles. This was Paul’s special calling, one in which God was glorified, v.24. God calls you with a similar purpose, not to be an apostle, but to be part of that church founded upon the apostles and prophets.

Serve the risen Christ! As you live to the glory of God, as you speak to your neighbors and friends, as you take part in advancing the work of the church of Jesus Christ, God reveals his Son in you as well as he did in Paul. God’s revealed will is that his church make God’s name known. As you are faithful in carrying out that task, God will be glorified. God has called you to serve him precisely where you are. Paul was an apostle. But God calls, not just to special office, but summons you to serve him in the ordinary affairs of life.

God has called you by his grace from a life of sin to lead a life of service to his glory. Live as a servant of the God who called you.