The Glory of the Lord 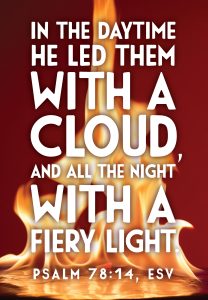 Give thanks for the presence of the Lord of Glory. The Lord blessed the completed Tabernacle with his presence. Do you remember that as Israel left Egypt, the Lord showed his presence in the pillar of cloud by day and pillar of fire by night? With the Tabernacle finally complete, the glory cloud descends on the Tabernacle and fills it. God was truly with his people. As God created, he paused at the end of several of the creation days and called his work good. In Genesis 1:31, at the end of the creation week, he surveyed the entire creation and pronounced it very good. And then God entered his rest, not because he was weary, but he entered it with the purpose of humankind also entering it. Of course Adam sinned, and instead of sharing God’s rest, instead of moving beyond the time of testing in the Garden to whatever exalted fellowship with his Creator would have resulted, he and Eve were expelled from the Garden. Some of the construction of the Tabernacle reflects the motif of Eden. Now, with it complete, God comes down in the cloud, fills the Tabernacle, and dwells in the midst of his people. It is not only a sign of God’s presence—he is truly with his covenant people.

The glory of the Lord is with you in Christ Jesus. As magnificent as that event was, you have something more wonderful as you trust in Christ. The Word has become flesh and has tented among us. In him you have seen the glory of the Father. This is not a temporary appearance. Even now, exalted to the right hand of the Father, he continues to be the God-man. Here on earth and now in heaven, he is the Lord of glory, 1 Corinthians 2:8.

Follow the leading of the cloud of glory. The cloud led Israel victoriously into the promised land. When the cloud would move on, Israel would follow. When it stopped, there they camped and settled for a time. See Numbers 9:15-23 for an expansion of what Moses describes briefly in Exodus. Further, as the pillar moved, it led the people to victory over their enemies, Numbers 10:35-36. That cloud would continue to lead them until they finally entered the promised land. Redemption from Egypt and entering the promised land were all gifts of God’s grace—free, undeserved, unearned. But, to enter the land, the people had to follow the cloud. To move in a different direction would have led them away from the rest that God held out for them in the land he had pledged to Abraham, Isaac, and Jacob.

Your Lord calls you to follow him. The Lord laid down his life for you, his people. Your salvation is free, unearned. The death of Christ is not just an example for you to follow, it is the substitutionary atonement. You can never be good enough to enter heaven on your own—but Christ’s righteousness is sufficient! Yet, even as he was facing the cross where he would die as the sacrificial Lamb, Jesus summoned his disciple and you to obedience: John 14:23-24; 15:9-12. No less than Israel following the cloud, you need to follow the path in which your Savior calls you to walk. You are led, not by a pillar of cloud and fire, but by his Word, the Scriptures.

Look forward to greater glory. The glory cloud filling the Tabernacle looked forward to the more permanent glory of the Temple. Once Israel had followed the cloud to the promised land and had settled in it, the Lord designated the place where his name would dwell, where he would no longer be present in a movable tent, but in a magnificent temple made of stone. The Temple was patterned after the Tabernacle, but on a grander scale. When it was finished, again God showed that he was dwelling in the midst of his people, as his glory filled that building, 1 Kings 8:10-11. As promising as things appear at the end of Exodus, Leviticus and Numbers describe the people sinning. As you read Kings and Chronicles, you have the tragic story of the land in which God dwells in the midst of his people being contaminated by idolatry. Something better, more permanent, is needed.

Both looked forward to the glory of the incarnation. Here would be the reality of what the cloud pictured. God became man and lived among us. As the God-man he redeemed us. The successful completion of his messianic work meant his glorification. That involves you! The church is where God, by his Spirit, lives in the midst of his people, 2 Cor. 6:16; 1 Cor. 3:16. “[T]he final goal of various significant redemptive-historical episodes throughout scriptural history was God’s glory. All these events with glorious goals point to the glorious goal of the final events of history, in which God will definitively execute judgment, accomplish redemption, and establish the eternal new creation. At this time, God’s glorious presence will permeate every part of the new heavens and earth and all will exalt and glorify him for his glorious atttributes, which have been manifested through his culminating acts at the eschaton.” (G. K. Beale, A New Testament Biblical Theology, p. 63).

Christ prayed for his glory—and yours. The night of his betrayal Jesus prayed in the presence of his disciples. In John 17 you stand on holy ground as you hear the Son pour out his heart to his Father. What does he pray for? He prays that the Father would glorify him with the glory he had with him from eternity, John 17:1 & 5. The infinitely glorious Son receives additional glory as the successful Redeemer, as the One who did his Father’s will. He then prays for the disciples present in the room. Finally, he prays for others who would come to trust in him through the apostolic message—he is praying for you. Included in his prayer is his desire to give his people his glory, John 17:20-24. Do you grasp the wonder of that? The Son shares his glory with you, his people, not just by appearing in a cloud, but by drawing you, by his death and resurrection, into the glory of the new heavens and earth. You, the people for whom he died and rose, you are part of the glory with which he is crowned. He is not empty handed, but he brings you into eternal fellowship with him and with his Father. In a real sense, you are part of the answer to Christ’s prayer that the Father would glorify him.

The Lord, descending in the glory cloud, filling the Tabernacle, is proclaiming that he is pleased with what he has had his people build. The Son, bringing you up into the new heavens and earth to share his glory for eternity, is showing that the Father is well pleased, not only with his Son, but also with the living temple, the church that he redeemed.