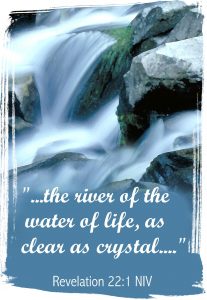 Come to the tree in the garden. The magnificent city is also a garden. Revelation 22:1–6 is closely connected with Revelation 21. What is a magnificent city is also a garden. But it is not just any garden. As you read about the river and the tree of life, you see that this is patterned after the Garden of Eden. Eden, however, was not intended to be a permanent state. Adam and Eve were to be fruitful and multiply, to have dominion, and to subdue the earth. Had Adam not sinned, he would not have simply sat under a fruit tree waiting for it to fall into his hands. He would have been busy. The bounds were to be extended. He was to move beyond a time of testing to enjoyment of the Sabbath rest into which his Creator and Lord had already entered. That goal of moving on to perfection was there before the fall and before redemption. Where Adam failed, the Lion-Lamb has overcome. The result is the holy city, the new Jerusalem, the bride of the Lamb, which is not only a city, but also Eden perfected—without a serpent and without the possibility of sinning.

You see that in the tree of life that gives healing to the nations. Because of sin, Adam and Eve were excluded from the Garden, and cherubim with a flaming sword blocked access to the Tree of Life. For Adam and Eve to try to eat of it in their fallen state would have been disastrous. It has been suggested that in the Garden that Tree had a sacramental significance, representing and even communicating the blessing God had promised. But they, and in them us, were disqualified. But in this restored and amplified Eden on each side of the river stands the tree of life. There are 12 crops of fruit, and the leaves are for the healing of the nations. Again, the language is symbolic. In the new heavens there are no imperfections or illnesses from which they need restoring. Rather, the language resembles that of God wiping away the tears of his people. The point is that the Tree of Life is there, and it does its work. God’s people, the nations, enjoy the reality that the Tree represents. Heaven and earth are combined in perfect unity. What Revelation 2:7 held out for the overcomers of Ephesus is true for the whole of the new Jerusalem. “The difference between day and night, between the Sabbath and the workdays, has been suspended. Time is charged with the eternity of God. Space is full of his presence. Eternal becoming is wedded to immutable being. Even the contrast between heaven and earth is gone. For all things that are in heaven and on earth have been gathered up in Christ as head (Eph. 1:10). All creatures will then live and move and have their being in God [Acts 17:28], who is all in all [1 Cor. 15:28], who reflects all his attributes in the mirror of his works and glorifies himself in them.” (Herman Bavinck, Reformed Dogmatics, Vol. 4, pp. 729–730).

Come to the river of life. This river flows from the throne of God and the Lamb. Down the middle of the street made of pure gold, transparent as glass, flows a river as clear as crystal, the river of the water of life. The river’s source is not some mountain spring, but the throne of God and the Lamb. This is the place from which life-giving water flows. The imagery here draws on Ezekiel 47. That river flows from the temple, which was God’s earthly throne. Despite a lack of tributaries it grows as it flows to the east. The Jordan flows into the Dead Sea (and adds to the salt and other minerals there). But this river refreshes, renews, and restores.

Here is the fulfillment of the rivers that run through the Scriptures. John, who wrote Revelation, records in his Gospel Jesus’s words to the woman at the well (John 4) and his cry at the Feast of Tabernacles (John 7:37–39). He had come to understand a theme that runs through Scripture, from the rivers that watered the Garden of Eden (Genesis 2), to Psalm 1; Psalm 46 (significantly Jerusalem has no physical river running through it), Ezekiel 47; Joel 3:18; and Zechariah 14:8. If you look ahead to the rest of Revelation 22, you see how important this concept of living water is.

See the face of God! You will see the very face of God. John is describing something even more wonderful. Moses, Exodus 33:12–23, asked to see God’s glory and was told that no one can see God’s face and live. That’s not primarily because God is God and we are creatures. The problem is that we are sinners, and sinners cannot be in the presence of a holy God. Our problem is not ontological (our being), but ethical—we are rebels and are corrupted by sin. But now the problem of sin has been dealt with. Notice that John continues to call Jesus “the Lamb.” Because he atoned for sin, you now have fellowship with God. And when the process of sanctification is complete and we are in the new heavens and earth, there will no longer be a barrier between us and God. You will do what Moses could not! “In that life [in the new heavens and earth], religion—fellowship with God—is primary and central. But that fellowship will be richer, deeper, and more blessed than it ever was or could be on earth, since it will not be disturbed by any sin, or interrupted by any distance, or mediated by either Scripture or nature.” (Herman Bavinck, Reformed Dogmatics, Vol. 4, p. 722).

Serve him—then and now. The new heavens and earth will be perfect—but we are not yet there. In them there will be no more curse—but we live in a world where we struggle with sin and the effects of sin. We face frustration, illness, and death. John is not just offering pie in the sky bye and bye. He knows that we who, like the members of the seven churches and like John himself, are struggling, we need to keep before us the picture he paints of the garden-city. “Revelation is designed not only to assure us of God’s final purposes, but also to increase our longing for him and the realization of his purpose. The sureness of that final bliss comforts the saints during times of temptation and persecution. It purifies our desires by directing them to God and his glory. And then the tawdry counterfeits of this world are seen to be what they are. We have eyes to see the beauties and joys of this creation as pointers to God and his goodness (Acts 14:17), rather than foolishly perverting created things into idols (Rom. 1:18–23).” (Vern S. Poythress, The Returning King, p. 192). The blessings John portrays are not only future, they are truly, though not yet completely, ours now. We already have benefits from the new heavens and earth, though we do not yet possess its fullness. As you trust the One who hung on a tree, you can taste of the tree of life. As you respond to the one calls you to come to him, you drink of the living water, and in turn, as part of the church which is connected to its heavenly head, you become a source of living water by the power of the Spirit whom he has poured out. As you have seen Jesus, you have seen the Father! You will serve him in the new Jerusalem. Worship and serve him today.

Come to the garden-city. Eat from the tree of life. Drink the living water. See the very face of God in Christ and live!