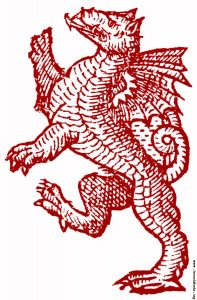 “Hark the herald angels sing, a dragon waits to eat our king.” That was a tweet by Chad Bird, linking to his blog post, “When a Dragon Tried To Eat Jesus: The Nativity Story We Don’t Talk About.” The opening sentence is: “I’m still searching for a Christmas card with a red dragon in the nativity, lurking amidst the cows and lambs, waiting to devour the baby in the manger.” It points to the nativity account in Revelation 12. When a friend posted a link to the article, I responded with, “I don’t have a Christmas card, but some of us do talk about it,” and linked to the December issue of New Horizons. But what happens after the birth and earthly ministry of Christ? What about when he has been snatched up to heaven and we, his people, his church, are still on earth—along with the dragon? What is going on? Is the dragon defeated? How dangerous is he? Are we now his victims? Revelation 12:10-12 gives you hope!

The accuser no longer has access. Satan accused God’s people. John uses dramatic symbolism, but he helpfully identifies the dragon as Satan, who, as his name indicates, is the accuser of God’s people. Think of Satan accusing Job before God, or again, bringing an accusation against the high priest, Joshua, in Zechariah 3. There is a superficial validity to Satan’s accusations—since God’s people are sinners (the serpent-dragon had something to do with that), how can a holy God forgive them? How can God’s justice do anything but condemn? A majestic voice from heaven explains.

Now the dragon has been cast out. John’s vision refers not to the original rebellion of Satan, who had been created good, as he incomprehensibly turned against his Maker and Lord, but to an event that took place in history. The death of Christ on the cross (described by John as “the blood of the Lamb”) provides the grounds for God to forgive his people, whether they lived before Christ, or, like us, after his earthly ministry. The basis for Satan’s accusations is gone, and he has been thrown out of the heavenly courtroom (remember that Jesus in Luke 10:18 spoke of Satan falling like lightning from heaven). “The battle that issues in the dragon’s expulsion from heaven is not the primeval conflict before Adam’s fall, when Satan and other angels who had been created good inexplicably turned against their Creator. Rather, the war in heaven that John sees in symbol was fought on earth, when Jesus suffered and died on a cross outside Jerusalem and then rose from the dead. The dragon’s banishment from heaven to earth marks the coming of God’s kingdom and of his Christ’s authority (Rev. 12:10).” (Dennis E. Johnson, The Triumph of the Lamb, p. 184).

Beware the fury of the dragon! The dragon tried to eat the Child. This is the crucial battle in the war that had been going on since Genesis 3 between the offspring of the serpent and the Offspring of the woman. Satan, who had tried many times to wreck God’s plan of salvation, seems to have won as finally he puts to death the Redeemer. But, as the compressed narrative of Revelation 12:5 makes clear, Satan fails. The Son of the woman is caught up to heaven. He is victorious, and Satan is frustrated.

The dragon pursues you. Unable to destroy the Son born to the woman, he turns his fury and frustration against her and her other offspring. John is writing to suffering, persecuted churches. He spews a flood of water out of his mouth, seeking to drown the woman and her children. Likely that is a reference to false teaching. Satan, if he can corrupt the faith of God’s people, wins. When that fails, he makes war against her and her children. God’s people continue to suffer at the hands of Satan and those doing his will. Included is not only open persecution, but all the suffering and pain that comes from living in a sin-cursed, fallen world, from living on the earth down to which Satan has been thrown.

The Dragon-Slayer has conquered! The dragon is overcome by the the blood of the Lamb and by the faith of his people. The battle is fierce, but the victory has been accomplished. The blood of the Lamb is victorious over Satan. Jesus died, not as the passive victim of Satan’s cunning, but as the sacrificial Lamb. His blood paid for the sins of Job and of Joshua, the high priest. Every time a lamb was sacrificed by a believing Israelite, his sins were forgiven, not because of some inherent value in the life of the animal, but for the sake of the One to whom the sacrifice pointed. The benefits of Christ’s death and resurrection flowed back to Old Testament believers, and flow forward to us who trust in him. Notice that the heavenly voice speaks not only of the blood of the Lamb, but also of “the word of their testimony.” The saints in John’s day and we today who are suffering demonic persecution, those who endure Satanic accusations, are delivered through our trust in the Lion-Lamb.

Now has come the kingdom of our God! Grasp John’s note of triumph. The Lamb was slain, but he is victorious! His death is inseparable from his resurrection. He has been caught up to heaven, but he has not abandoned his suffering people. He will reappear in Revelation 19 as the conqueror on a white horse. In Revelation 20 he will cast the Accuser into the lake of fire for eternal judgment. Revelation 12 gives you an important warning: prepare for suffering. If you are united to your Lord by faith, you will share in his sufferings before you share in his glory. But you do so in confidence, because your Accuser is a defeated enemy. “Christians can be assured that the serpent begins to battle against their bodies only after he has lost the battle over their souls. This expresses one of the major themes of the book: the suffering of Christians is a sign, not of Satan’s victory, but of the saints’ victory over Satan because of their belief in the triumph of the cross, with which their suffering identifies them.” (G. K. Beale, The Book of Revelation, NIGTC, p. 663).

Live in the wilderness—in confident hope. Surviving in the wilderness (which is where the woman finds refuge) may seem like a last resort to you, but don’t read that back into the picture John paints. The wilderness is the way of salvation, as Exodus makes clear. The Lord redeems his people by taking them out of Egypt into the wilderness—before the reach the promised land. The wilderness is the setting for the great covenant-making event at Sinai, where God promises to be the God of his people. The wilderness is the location of the voice crying in preparation for the coming of the Messiah. That salvation-in-the-desert theme is underlined by the wings of eagles given to the woman, see Deuteronomy 32:10-12. She flees, not aimlessly, but to place prepared for her. Hebrews 3 and 4 make clear that you, the church today, are a wilderness people. Yes, you undergo testing. Yes, you face suffering. But as you persevere, you have the assurance that you will enter the perfect rest that God is preparing for his people. You are destined for the heavenly sanctuary into which your Lord has already entered. The Lamb, having defeated the Accuser, prepares a new creation where you will live in fellowship with him.

Revelation 12:10-12 emphasizes time: “Now” at the beginning of what the voice from heaven says, and “his time is short,” at the end. The time in which you live, the year 2017, with all of the suffering and problems involved, is the time when you live in the confidence that the dragon is a defeated enemy. The Dragon-Slayer has won!