The Church: Walking before the Lord 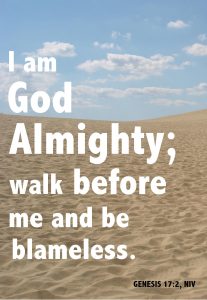 What does the Bible teach us about the church? What is the church? A key concept is that of covenant, and it comes to clear expression in Genesis 17:1–8. Abraham—and you—are called to walk before the Lord and be blameless!

Rely on God’s covenant faithfulness. Listen to God’s name, El-Shaddai, or God Almighty. The name is used four more times in Genesis and once in Exodus. It seems to refer to the sovereign power of God (Isaiah 13:6; Joel 1:15). But it is not simply raw power, but the power of God directed to the preservation and blessing of his people. God uses a name that reminds you of his faithfulness, particularly in the context of the covenant he makes.

This God has made his covenant with you. Though the word covenant is not used in Genesis 12, God’s promises (descendants, possession of the land, being blessed and being a blessing) are the same as what you see here in Genesis 17, where God explicitly makes his covenant with Abraham, changing his name to reflect his blessing. Back in Genesis 15 you read of the covenant-making ceremony that God brought to Abram in a vision. God initiates the covenant. It’s not the result of negotiations or bargaining. What is a covenant between God and man? “This covenant [with Abraham], initiated, established, defined in promises and commands, and even guaranteed to be everlasting, by the sole sovereignty of the Lord God Almighty, is nevertheless a union of God with his people. It is the same union that comes to expression in the New Testament phrase ‘in Christ.’ This is the essence of the covenant concept, the essence of all true religion. The covenant God made with the man from Ur is the union God has established with his own in Christ Jesus, himself the epitome of covenant as the incarnate God-and-man, Immanuel. There is no more glorious concept given to men than this: God with us!” (John J. Mitchell, “Abram’s Understanding of the Lord’s Covenant,” The Westminster Theological Journal, XXXII, No. 1, November 1969, p. 48). The covenant sign of circumcision denotes far more than national identity. It is a sign and seal of God’s special relationship with his people. Thus the Bible can talk of circumcising the heart and ear, Deuteronomy 30:6; Jeremiah 9:25–26. It is the blessing of God’s presence with his people—but also carries the threat, that if his people spurn his covenant, God will cut them off. In Colossians 2 Paul makes the point that what the Old Testament signified and sealed has become a reality, has been fulfilled in Christ. Note how he uses the terms circumcision and baptism in a parallel way. The church is the covenant community today—no longer primarily genetic descendants of Abraham, but all of those who share the faith of Abraham. The New Testament sign has changed, but the basic covenant relationship remains the same.

Walk in God’s presence. Be blameless! The Almighty requires Abraham (and you) to be blameless. That’s a tall order. God’s covenant dealings include the requirement of obedience as well as the graciousness of his promises. The demand for obedience is here for Abraham, and the grace of God is explicit as he gives his law to Abraham’s descendants at Mount Sinai. Don’t play those concepts off against each other! Holiness was and continues to be what God requires of you, Leviticus 19:2; 1 Peter 1:15–16. You can be that only in Christ. He is the one who underwent the curse of the covenant in your place. He didn’t simply walk between cut animals—he gave his life on the cross. God requires holiness, and he gives you his Son. In him you are God’s holy people.

Walk before God. That means that you are never out of his sight. Think about that when you are tempted! But it also means that you are never absent from him. “The ‘walking before Je­hovah’ pictures the con­stant presence of Jeho­vah to his [Abram’s] mind as walking behind him, and supervising him. The thought of the divine approval furnish­es the motive for obedi­ence. Also the force of El-Shaddai must be no­ticed. What shapes his conduct is not the gen­eral thought of God as moral ruler, but specifi­cally the thought of El-Shaddai, who fills his life with miraculous grace.” (Geerhardus Vos, Biblical Theology, pp. 102–103). In Christ, El-Shaddai is present to draw you to himself, to uphold you, to watch over you. He brings you back when you wander. This walk before God is never based on who you are or what you do. The only way to walk before the Lord is by faith—trusting in, depending on the Son who gave himself for you. Paul understands that walk. In the context of reminding the Colossians of their Spiritual circumcision, or baptism into Christ, he says, “So then, just as you received Christ Jesus as Lord, continue to live in him, rooted and built up in him, strengthened in the faith as you were taught, and overflow with thankfulness” Colossians 2:7.

You live in a culture that puts enormous pressure on the church, as well as it individual members, to conform to its concepts of what is politically correct. Your situation sounds like that of Abraham, living among the idolatrous, immoral Canaanites. How do you survive? Your God has marked you, his church, as his covenant people. Because he sent his Son to be your redeemer, he summons you, like Abraham, to walk before him and to be blameless.