Songs of Joy and Shouts of Judgment 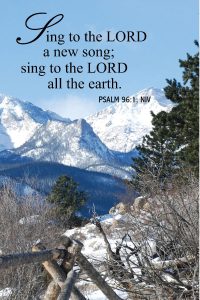 Join in the song of joy. Sing because you belong to the Lamb and his Father. When you understand who are singing and why, you realize that you can do more than listen—you can join in the song. John listens to a loud sound like thunder and rushing waters, but also as melodious as harp music. The sound comes, apparently from the 144,000. This is a song of victory, see Revelation 15:1–4.. What they sing is a new song. Repeatedly in the Old Testament, when God accomplishes a new work of salvation, his people respond with a new song, Psalm 96:1; 149:1. Christ has purchased his people, the ultimate new work of salvation. Because you are among the redeemed, this is a song in which you join. The 144,000, introduced back in Revelation 7, represent God’s people in their fullness. 666, the number of man, falling short of God’s perfection, is contrasted with the the number of his people—12 apostles, 12 tribes with 12,000 from each tribe. It may look as though the whole world has submitted to the beasts, but God is redeeming the fullness of his people.

Sing a new song that angels cannot learn. This song is unique to the redeemed. The followers of the beast do not know it, not surprisingly. But, and you should be surprised at this, it seems that the angels in heaven, the true Mount Zion, cannot learn this either. It is not that the glory of God is concealed. Rather, this heavenly choir is composed of redeemed sinners. They have experienced the redemption purchased by the Lamb, not as awestruck bystanders, but as the objects of that redeeming love. You who trust in Christ have an experiential knowledge of his work that the angels long to look into. “The lyrics of these celebrants’ songs are secret, known only to them. The purpose of this secrecy is not to keep God’s glory veiled but to symbolize the the astonishing truth that sinful people redeemed by the Lamb are qualified by that experience of salvation to extol him in a way that even the purest, highest angel cannot. Into the mystery of our salvation even angels long to look (1 Peter 1:12).” (Dennis E. Johnson, Triumph of the Lamb, p. 204).

Live as those who belong to the Lamb. Notice the mark that the 144.000 have—not the mark of the beast, but that of the Lamb and his Father’s name written on their foreheads. They belong to the Lamb and to the Father. They are under his protection and care, even though they may have to give up their lives for his sake. And if you are among those who sing this new song to the Lamb, you live as those purchased by him. They, and you, follow the Lamb. Don’t take the description of not having been defiled as an exaltation of celibacy over marriage (married love is a good, ordained by God in Eden). Rather, note the connections made in the letters to the churches, and in the description of the woman on the beast in Revelation 17, between idolatry and sexual immorality. The prophets had described idolatry as Israel being unfaithful to her loving husband and Lord. They spoke of Israel as the virgin daughter. These are saints, male and female, who love their Lord, who follow him, who keep themselves from lies, and who are blameless. As a follower of the Lamb, reflect his character. What you will be in glory must be evident, even if faintly and imperfectly, in what you are today. This mighty army has been purchased as firstfruits. Not only do they represent the best and the perfect, set apart to God, but they are part of complete harvest, coming with certainty because they have been redeemed. “The Lamb’s army has been ‘purchased’ from the whole human family as ‘first fruits’ (Rev. 14:3–4). The term purchase recalls the earlier doxology to the worthy Lamb, whose blood ‘purchased’ for God persons from every tribe, tongue, people and nation, to become a royal priesthood (5:9–10) Here, however, John sees assembled in heaven just the firstfruits of a much larger harvest, the foretaste in miniature and in promise of a full harvest to come.” (Dennis E. Johnson, Triumph of the Lamb, pages 204).

Listen to the angelic shouts of judgment. The eternal gospel includes warning of judgment. In Revelation 8:13 an eagle had announced coming judgment with a triple cry of “Woe!” Now three angels, with loud voices, warn of coming judgment. Notice that the message of the first angel is that judgment is coming, yet his proclamation is described as the eternal gospel. The good news of Christ’s saving work cannot be properly understood unless one appreciates the awful nature of sin and the eternal consequences of it. Christ does not simply make us a little better, or help us to be more human. Rather, he has redeemed us from the everlasting judgment, that, later in Revelation we will see measured out to the dragon, the beasts, and those who worship them. The good news of Christ’s saving work involves warning of the wrath to come.

Babylon is fallen! Isaiah 21:9 describes the fall of Babylon. In his day, Assyria was the major threat, but a brief ascendancy of Babylon tempted the Israelites to put their trust in that kingdom. Babylon’s fall to Assyria is a reminder to Israel to look to the Lord, and not to men for protection. Later Babylon would defeat Assyria and would destroy Jerusalem. Yet, it too would fall, as Jeremiah 51:8 describes. Revelation 14:8 is a brief preview of the rebellious city whose destruction by God will be described in Revelation 18. The name becomes a symbol of Rome—and beyond that of all human powers that rise up against God and seek to harm his people.

Persevere because judgment is coming. The third angel outlines the fury of God’s judgment in more detail. Those who worship the beast, those who oppose him, those who persecute his people, will fall under unending judgment. The smoke, sulfur, and fire use language that Isaiah 34:10 used to describe God’s judgment on Edom. Judgment is coming. Flee from it—to the Lamb. “This calls for” (Revelation 14:12) is a call to pause and reflect on an appropriate response. Judgment is coming—so endure. The present suffering of the saints is temporary. The Lord does not ignore his people. The day of judgment will be a day of vindication and victory for those who follow the Lamb. Thus the angel can reassure you that death in the Lord does not mean he has abandoned you. Rather, you are blessed. Further, your deeds follow you. What you do in this life, your commitment to the Lord, your faithful service of him, is something that has eternal consequences. There is a close connection between this life and the life to come.

Listen to the shouts that warn you that judgment is coming. Flee from it to the Lamb that was slain—as he bore your judgment. And because you flee to him, join in the new song, one that is so wonderful that even the angels want to look into these matters.