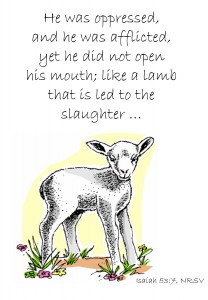 Have you had someone refuse to speak with you–just keep silent, no matter what you say? Silence can be a powerful weapon. Isaiah 53:7 describes the Servant suffering silently in your place as he does his Father’s will. But in that silence hear judgment as well. And finally, listen to the words that are framed by that silence.

Remember that Christ suffered silently in your place. He is the sacrificial lamb. Isaiah 53:7-8 is the passage that puzzled the Ethiopian official until Philip explained it, Acts 8:26-40. This is the part of Christ’s work that the world cannot and will not, in its own wisdom, understand. The world can see something beautiful in the birth of the Baby in Bethlehem. It can see value in at least some of his teaching. It can admire the death of a martyr. But the silence of the Lamb of God is beyond its comprehension. The death of Christ, the foot of the cross, is a place full of mystery and awe. If Moses had to remove his sandals at the presence of the Lord in the mysterious burning bush, we need to stand before the cross in at least equal awe. Isaiah wrote of the Messiah who would suffer on behalf of his people. His work was to be vicarious. We are like sheep going astray—he is the sacrificial sheep offered in our place. He is the one John the Baptist proclaimed as the “Lamb of God who takes away the sin of the world.”

Christ endured his suffering without complaint. The gospel accounts reveal how Jesus fulfilled this prophecy of silence: before the Sanhedrin; before Pilate, and while on the cross. Mere men might have railed against the false accusations and taunts, but this is the Son of God willingly laying down his life for his people. Isaiah aptly describes his suffering in terms of a sheep being sheared, or being led to sacrifice. All the thousands upon thousands of sacrifices in the Old Testament find their fulfillment in the silent suffering that Christ endures. Willingly, without complaint, he dies in your place. The silence on Golgotha contrasts with the shouts of the Triumphal Entry the Sunday before. Jesus suffered silently for you. Next time you are tempted to sin, remember the price at which your salvation has been purchased! Take comfort when Satan or your conscience accuses you. Respond that your Savior suffered in silence in your place—so that you will not suffer eternally for your sin.

Listen to the judgment in Christ’s silence. Christ’s silence says as much as his words. The expected curses and groans did not come from the Savior’s lips. What he did say is important, and is recorded by one or another of the Gospel writers. Yet, all seven sayings took only a moment or two. For 5 hours and 55+ minutes he hung silent. The cause was not weakness, for his final words were cried out in a loud voice. He had spoken of his death earlier: “Just as Moses lifted up the serpent in the desert, so the Son of Man must be lifted up…” John 3:14; “I am the good shepherd. The good shepherd lays down his life for the sheep” John 10:11; “But I, when I am lifted up from the earth, will draw all men to myself” John 13:32. Imagine the effect if he had used the cross for a pulpit, and turned the hill of Golgotha into a second sermon on the mount. He could have explained powerfully what his death as a substitute meant. But instead you have silence! For most of the time on the cross Christ chose silence rather than words to communicate. You have him submitting to the will of his Father in heaven–for your sake. He has already wept over Jerusalem. He has repeatedly called his people to repent. His silence underlines and emphasizes the grace of God in what is happening. The events of Golgotha are too awe-full for words.

Jesus’ silence pronounces God’s judgment. Silence can mean that there is nothing more to be said, that there is no point in seeking further communication. Sometimes no response at all is the best response to an utterly unjustified attack. Silence can be a terrible weapon, especially if used unfairly. But Christ does not use his silence thoughtlessly. He breaks the silence as he provides for his mother, and as he assures the repentant thief of grace. Several of his words are prayers–he can still speak to his Father in heaven, even as he suffers. As he hangs on the cross he is surrounded by the mockery of the passers by and the chief priests. The taunting challenges of the passers by challenging the Savior to come down and save himself provide blasphemous entertainment. The soldiers, and even one of the thieves joined in the mocking. And some of those recorded as passing by and shaking their heads doubtless have some sympathy, some revulsion at what the Romans are doing, but utterly fail to recognize what is really happening. To none of them does he respond. You see similar responses to the cross today. The world has plenty of people willing to give a passing glance at the cross, but who are far too busy to consider what it really means. There are many who may have heard the good news, but who refuse to let it disturb the comfort of their lives. For those who persist in refusing his substitutionary work, those who consider themselves too good to need a Savior, whether among those standing on Calvary or today, his final answer is silence. “There comes a time in God’s dealings with sinners when He has nothing more to say, when something more powerful than words will be necessary if they are to be converted. And that is usually his last witness to them. If the utter silence of God does not impress them, then there is nothing left for him to do but to forsake them forever.” (Peter Eldersveld, Nothing but the Gospel, page 57).

For you who trust him, Christ’s silence frames words of blessing and comfort. Christ’s words are spoken for you and to you. Scattered through the silence of judgment are the words Christ speaks. And those words convey grace. They speak of forgiveness. The prayer for forgiveness is uttered not only on behalf of those driving nails into him, it is a prayer for you and me, whose sins are the deeper cause for his being nailed to the cross. He is the Savior who spoke to his mother and John (entrusting them to each other) so that he could be not first of all a family member, but their Savior. As you put your trust in him his words of comfort to the thief are addressed to you. The Lord who spoke to them continues to speak to you. His agonizing, “My God, my God…” means that you never need to speak those words, and “It is finished!” was a cry of triumph sealing your salvation.

The silence of Jesus speaks of your salvation. For you, God’s covenant people, the silence of the cross is eloquent. It speaks of the suffering of the Savior in your place. In that silence the Son reaches out and drinks to the dregs that cup which, the night before, he had asked his Father to remove from him (Mark 14:36). Jesus Christ suffered and died as your great high priest. He died as your king. But he also suffered and died as the great prophet. In his words and even in his silence he communicates both the grace of God and the wrath against those who refuse him. The silence of the Lamb that was slain leads to the triumphant roar of the Lion of the tribe of Judah! For him and for you silence is not permanent. The silence of Golgotha will be broken by the cry, “He is risen!”. As the risen Lord, he would pour out his Spirit so that the silence of Golgotha would resolve into the Pentecostal proclamation of the good news from Jerusalem to the ends of the earth—and to your hearts.

Stand at the foot of the cross and listen to the silence. Do you hear unspoken judgment against resistance to the gospel, or do you hear the silence of the Lamb of God as your sins are placed on him? Do you hear silent suffering that leads to joy?