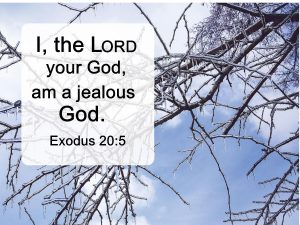 God spoke the ten words and Moses went up the mountain at the request of the people of Israel to speak with God. 40 days seemed long to them, but so quickly they forgot what God had said in Exodus 20:4-6 about not making or worshiping images. Aaron gave in to their demands and made a golden calf. How could they forget so quickly? Yet you and I have a similar propensity to fashion God according to our imaginations.

Do not make images. Serve no idols. This commandment differs from the First in that it tells you how to worship God. In some circles it is included in the First Commandment (and the Tenth is divided), but often ignored. The worship of the golden calf appears not to have been an effort to abandon the worship of the Lord, but rather to make an image for the people to see as they worshiped, and to visibly lead them on their journey. God prohibits image worship. You can’t picture God. Don’t try. Don’t even make images for worship or use them as aids in worship. Note the exclusive language. Verse 4 prohibits any image making, verse 5 prohibits any worship of them. (Note that Scripture does not prohibit all art that represents humans or other creatures. It is the making and use of these images for worship that is forbidden.) Any kind of idolatry starts in the heart, the heart which John Calvin describes, “The human mind is, so to speak, a perpetual forge of idols.” (Institutes, Book 1.11.8). If you speak harshly to your neighbor or co-worker, imagining that God does not have ears to hear you, you have re-shaped the God of the Bible into your own image. When you start to think that God is too loving and forgiving to condemn you for ______ (fill the blank with your besetting sin), you have shaped God into your image. And if you make God more harsh than he is, if you imagine that he delights in the judgment of the wicked, that he is some kind of heavenly Scrooge, you have re-imaged him. “The heart of the objection to pictures and images is that they inevitably conceal most, if not all of the truth about the personal nature and character of the divine Being whom they represent. . . . Whatever we may think of religious art from a cultural standpoint, we should not look to pictures of God to show us His glory and move us to worship, for His glory is precisely what such pictures can never show us. . . . To the extent to which the image fails to tell the truth about God, to that extent you will fail to worship God in truth.” (J. I Packer, Knowing God, pp. 40-41).

You cannot make an image of God. God is Spirit. The golden calf, a symbol of fertility and power, was terribly inadequate. So is the “old man with a white beard” conception many have. God reserves to himself the right to make images of himself. And he has already made such an image. The creation language of this commandment recalls Genesis 1:26,27. God has already made something in his image–you, mankind. For God’s image to bow down to any part of creation, human or non-human, is blasphemy. The making of images by men is an attempt to enable a connection between the image-maker (or worshiper) and the deity or power that is being portrayed. Eli’s sons did not think that God was contained in the ark, but they thought that through that object they could ensure his presence. God has a way of showing you that he is bigger, greater, than anything you can imagine. Not only has God made man in his image, but it was in that human nature that Christ became incarnate. To see what God is like look at Jesus Christ, who reveals the Father, John 14:9.

The book, The Shack, reimages God as someone whom Mack, the main character, can come to understand. It has deep theological flaws in describing who God is and what he is like—but the book sold 20,000,000 copies. The movie adds the extra dimension that you have people playing the parts of the persons of the Trinity. “Everyone who watches the film will see a human actor portraying the divine Holy Spirit and in that way have their understanding of the Spirit diminished. To portray the Spirit is to vastly misrepresent the Spirit; to portray the Spirit is to blaspheme the Spirit. The same is true, of course, of the Father.” (Tim Challies, http://www.challies.com/articles/why-i-wont-be-seeing-or-reviewing-the-shack).

Worship and serve God as he wishes. Come to God in his Son. “If you stand with your back to idols, then you must still learn to kneel properly before the God of Israel. . . . You may serve no other gods; but the Lord in turn wants to be served in no other way than He has commanded.” (J. Douma, The Ten Commandments, pp. 35-36). What principles do you use to make a Biblical decision on whether to allow a choreographed interpretation of the Lord’s Prayer in worship? God is not to be worshiped with the good ideas that man comes up with, but in the way he requires. This is described as the regulative principle of worship. God is concerned with the specifics of worship, see Exodus 20:24ff. He reveals himself as the one who gives his law, forbidding worship which goes beyond it, Jeremiah 19:5; Mark 7:7. The elements of our worship service are those revealed in the Scriptures, either by specific command or by the example of the apostolic church. how do you see this invisible God? He has revealed himself in Jesus Christ. Not only does Christ show you about the Father, he opens the way to him. He took upon himself both the guilt and the punishment which is rightfully yours as a covenant breaker. He is the way to the Father. Trust in Jesus, and you come to see the Father, not with your eyes, but you come to know him, to love him, to trust him. “Positively, it [the Second Commandment] is a summons to us to recognize that God the Creator is transcendent, mysterious, and inscrutable beyond the range of any imagining or philosophical guesswork of which we are capable; and hence a summons to us to humble ourselves, to listen and learn of Him, and to let Him teach us what He is like and how we should think of Him.” (J. I Packer, Knowing God, p. 42).

God underlines the importance of this commandment. God’s curse attends disobedience, for God is jealous–in a proper sense. He is unwilling to share his glory with another, even if the other is intended to represent him, Exodus 34:14. God is not unjust, but you must recognize that sin has its effects, not only on you, but on generations to come. An alcoholic or abusive parent may see his children and grandchildren suffering because of his sin. If you re-shape God, don’t think that your children will not pick up on it or will not be negatively influenced by that. Worship involves far more than what you have been doing for the past hour, Rom. 12:1. All of life is brought into service to God as you worship him today. Tremble as you think of how inconsistent much of it is. The warnings of this commandment are addressed to you. God’s blessings are immeasurable. The blessings are not just to thousands of people, but to the thousandth generation, see Deuteronomy 7:9. Sinners that we are, the blessings come to us, not because we have earned them, but because Christ has earned them for us. God promises to be your God, Exodus 19:5. Being his people involves loving him and keeping his commandments, (the plural shows the breadth to which the promised blessings apply). As you have grown in your Christian life, you have come to realize more how far short you fall in keeping even this commandment. As you come to God to worship him, you come in Christ. You come on the basis of his completed work, and through continuing intercession. You come in the Holy Spirit, with him interceding for you with groanings that cannot be expressed.

The space between the cherubim on the cover of the ark, the mercy seat, was vacant, not just because you cannot image God, but also because it was a space reserved for the One who is the exact image of God, Heb. 1:3; Col. 2:9. God calls you to worship in Christ, rather than through anything or anyone else in all creation. And that worship he receives. With it he is pleased.