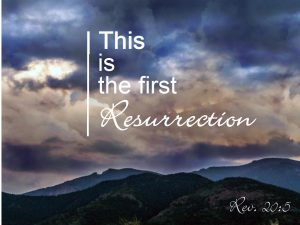 Satan is bound—and loosed. A mighty angel binds Satan. Have you listened to an orchestra play a symphony? In some ways, the Book of Revelation is similar. The introductory notes of the symphony may contain a musical theme that is picked up, repeated, modified, and which may become a central theme in the musical piece. Suffering Christians have been reassured repeatedly that the righteous Judge will set things right. Christ’s coming in judgment has been described repeatedly: Revelation 6:12–17; 8:1–5; 11:15–19; 16:17–20; 18; and 19. Like a movie, which may trace events from various perspectives, John has show you the events at the end of the age. A mighty angel carries out the will of his Lord. In Revelation 1:18, Christ clams to have the keys of death and Hades. This angel has been given the the key to the Abyss. He seizes the dragon, identified as Satan, and imprisons him in the Abyss. Notice that this is not a total imprisonment of Satan. He is still a dangerous enemy. But he is restrained specifically with respect to his ability to deceive the nations. Think of the spiritual darkness that covered the world before the coming of Christ—and the contrast that began with his earthly ministry, his death, resurrection, and his ascension. John has pointed you there in Revelation 12:5.

1,000 years? The word millennium refers to 1,000 years, and around that have developed three views (premillennialism, postmillennialism, and amillennialism), with variations on each. The premillennials believe Christ’s second coming will come before the millennium, which will be a literal (or symbolic) period of 1,000 year reign of righteousness. The post and amil positions view the 1,000 years as a symbolic number, indicating a long time. Don’t forget that this book is full of symbolism—look at the red dragon of Revelation 12. The postmillennials view Christ’s return as coming after a period of peace brought about by the proclamation of the gospel. And, despite what you might expect, amillennials do believe in a millennium, but think of it as the whole period between Christ’s first and second comings. Although differences are important, the issue is too big for treatment in one sermon. Perhaps more important than the label (pre, post, or a) is the question, do you take seriously the fact that Christ has obtained the victory, and that the victory is comforting to his suffering saints. “The major point is that Satan will be finally defeated, and that even before that time God takes care of his saints and gives them enjoyment of the benefits of his triumphant rule. This assurance ought to comfort us, whatever our millennial position.” (Vern S. Poythress, The Returning King, p. 178).

Satan is loosed. However one views the millennium, it is clear that after the time of restraint, Satan is released to exercise his deceptive power in gathering the nations and rulers of the earth to do battle against the Lord. His power may seem overwhelming. His deception, at which he has had plenty of practice, deceives his followers and even threatens the church.

The deceiver is doomed. The last take on the last battle. Using various devices, seven seals, seven trumpets, and seven bowls, John has reminded you of the goal toward which history is moving. As powerful as Satan is at times, as devious and destructive as his tactics are, the victory belongs to Jesus. John describes the assembled armies of opposition as Gog and Magog. In Ezekiel 38 and 39 the prophet uses those terms to describe the symbolic destruction of God’s enemies. What Ezekiel looked forward to became a reality with the coming of the Messiah. Satan was dealt his decisive defeat. But, like the period between D Day and VE Day, warfare goes on. There are real battles and real casualties. But, as in Revelation 12:5, he compresses events. He describes the final defeat of Satan and his hosts in compressed form. But the main thing is—Satan is doomed. “[I]n this reprise of the last battle the conflict ends almost before it starts (20:9). the besieging forces gathered on breadth of the earth surround ‘the camp of the saints.’ Like ancient Israel, the church on earth is a wilderness community, camping by not at home in the earth. The church does, however, have a lasting identity despite it present temporary status as sojourners, so John adds a second description, ‘the beloved city.’” (Dennis E. Johnson, Triumph of the Lamb, pp. 295–296).

Raised to reign with Christ! Between Revelation 20:3 and verse 5, John focuses on the believers. What about them while all this is going on? Despite being persecuted, and some of them martyred, John describes them as sitting on thrones and reigning. From the world’s perspective, they have been noting. They suffered mistreatment and even martyrdom. But what the world calls “death” Christ calls “the first resurrection.” Although he focuses on martyrs, his language is broad enough to include all whom Christ has redeemed. These are protected from the contrasting “second death.” That refers, not just to physical death, but to the eternal judgment of hell, the lake of burning sulfur. John is not trying to give a comprehensive detailing of all that happens at the second coming. Read Revelation 20 in the light of Matthew 24 and 1 Corinthians 15, as well as the rest of Scripture. Remember that John’s purpose is to encourage and give hope to battle weary Christians. Satan’s attacks sometimes take the form of open persecution. Western media misses a great deal, but thousands of Christians have been put to death in remote parts of Nigeria in recent years. John reassures suffering Christians that even their death, from Christ’s perspective, is the first resurrection. Sometimes Satan uses the discouragements of your daily life to try to make you give up hope. Perhaps you ask, does it really matter if I continue to trust in Christ? Does it make any difference if I continue to serve him? Again, the answer is yes. That doubt is part of Satan’s tactic of deception. Christ is victorious, and he does give hope to his people.

The discussion about the details of Revelation 20 could go on and on. But don’t miss the basic point. In this life, and even in your death, you belong to Jesus Christ. He will not abandon you. His triumph means your ultimate triumph, regardless of how things may seem.