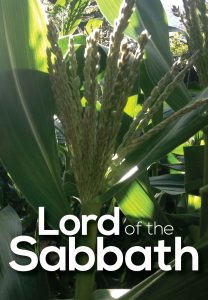 In an increasingly hectic and stressful world, you need rest. But that is not simply our idea—it is a goal that God planned for us, his creatures, made in his image. The Fourth Commandment, Exodus 20:8-11, the longest of the Commandments, points you to the gift of rest.

Look back at the Sabbath. Look back to creation rest. The Commandment begins with remember. Not only is that an exhortation to keep the instruction in your mind, but it also points back, all the way to creation. Don’t dismiss this Commandment as simply part of the ceremonial law for Israel, though there were ceremonial aspects. It is a creation ordinance. God worked in creating for six days. Notice that this Commandment also commands you to work. It gives dignity and meaning to labor. Then God rested—not because he was tired, but in order to celebrate his very good creation. And he entered his rest so that mankind could join him in that rest.

Look back to redemption. At the end of the 40 years in the desert, just before Moses died, he repeated the Ten Commandments. Notice the different reason given in Deuteronomy 5:12-15. The Sabbath was a celebration of the Exodus, the great redemptive event in the Old Testament. No wonder that as Christ comes and provides the far greater deliverance, not from Egypt, but from sin and death, as he becomes the Passover Lamb, no wonder that his resurrection moves the celebration of the Sabbath from the last day of the week to the first. It is now appropriately called “the Lord’s Day.” If you are among those redeemed by him, you have better reason than Israel to celebrate the day!

Look forward. Look at the rest into which God has entered. Hebrews 3:7—4:11 takes up the rest into which God entered (Genesis 2:1-3), and reiterates the warning of Psalm 95 of the sin of unbelief that keeps one from entering God’s rest. “For the writer [of Hebrews] the weekly Sabbath is an eschatological sign, grounded in creation and continuing under the new covenant until the consummation.” (Richard B. Gaffin, Jr., “A Sabbath Rest Still Awaits the People of God” in Pressing Toward the Mark, p. 47).

Look at today! Celebrate this special day. Don’t begin a discussion of the Sabbath by making a list of things I cannot do (or even of things I have to do). Instead, focus on the joy of fellowship with God. The more you focus there, the less room there is for lesser, competing things. Sometimes the enemy of the best is other good things. Give yourself the opportunity to experience the joy described in Isaiah 58:13-14. Don’t deprive yourself of that joy! “But God’s rest is not just a parenthesis in the workweek for the good of the body. It carries a much deeper significance. God did not rest to recover from exhaustion, nor is his rest defined simply as the absence of work. In his rest, God is reveling in the goodness of his creation, and especially in the goodness of fellowship with those he created in his own image. God’s rest is not an abstract principle that does not touch the lives of his chosen people. God gives Moses a blessing that he is to teach to Aaron and his sons: ‘The Lord bless you and keep you; the Lord make his face shine upon you and be gracious to you; the Lord turn his face toward you and give you peace’ (Num. 6:24-26). This blessing shows that the peace and rest experienced by the people is the peace that comes because God is with them, among them, loving and caring for them. The blessing is God’s presence, God’s rest. The Sabbath marks the fact that God delights in the presence of his people. Of course, God’s rest in creation is not the end of the story, just as the Israelites did not find true rest in their desert wanderings. The rest to which the Sabbath points is not only rest from the tyranny of Egypt but the rest they will know in having a true home, a land of their own, where they can live in peace and in the presence of God. God brought them out of Egypt to the Promised Land, their land of rest.” (Edmund P. Clowney, How Jesus Transforms the Ten Commandments, pp. 54-55).

Focus on the Lord of the Sabbath. Look beyond the issue of how you keep the Sabbath, though thinking about that is a very worthwhile exercise. If your primary focus is, am I doing all the right things on the Sabbath (or, worse, is my fellows believer keeping the Sabbath in a way that makes me comfortable), you are in real danger of falling into the trap of the self-righteousness of the Pharisees. They condemned Jesus for allowing his disciples to pluck a few ears of grain. They were offended that he healed a man with a withered hand on the Sabbath. He could have told the Pharisees that they were being ridiculous, legalistic, and self-righteous—and that would have been true. Instead he points out that God had made the Sabbath for man, for mankind’s benefit. Man was not created for the Sabbath. The he makes the astounding claim that he, the Son of Man, is Lord of the Sabbath. His response angers the Pharisees, for he is claiming to be the God who created all things—including the Sabbath. He is the one who redeems us. He is the one who brings us into the eternal rest of the new heavens and earth. He is the one who summons you to trust in him and acknowledge him as your Lord and your Savior.

If today is just the last day of the weekend it is only 24 hours for you to use for whatever fleeting reason you deem important or pleasurable. But if it is the Lord’s Day, it is a day of celebration, a day that sheds the light of God’s blessing on your work which serves him in the week ahead. It is a day that looks all the way back to God’s example at creation, a day which traces his saving work as it culminates in Christ’s resurrection, and then provides a taste of God’s eternal rest, from which he invites you to join him.