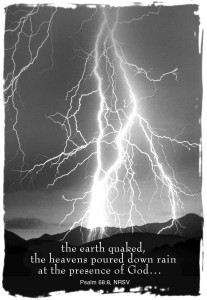 The book reminds you that in the Old Testament, disobedience was punished. The author mentions the Law as having given through angels. He may have in mind Deuteronomy 33:2 and Psalm 68:17, as well as references in writings made between the Old and New Testaments. In the New Testament the activity of angels in connection with the giving of the Law is mentioned in Acts 7:53 and Galatians 3:19, as well as this passage in Hebrews. The point is that, as glorious as were the angels, they were not the source of revelation in giving the law, but were simply a means, helpers that God used in communicating his will to his people. God was the ultimate speaker, but it was indirect speech. Hebrews is contrasting that, as you look back to Hebrews 1:1-2, with the revelation in the Son. He is far more glorious than they.

The Law was, and is, binding. God was the author, the ultimate speaker, and he held his people accountable. Specific offenses had specific consequences, see Exodus 21 and 22. The ultimate sin of idolatry and rebellion was punished by the captivity. “The law, as given through angels, imposes a lesser responsibility than does the revealing word of the Son. Of course this does not mean that the word given through angels is less true or less reliable, for in the ultimate analysis it is just as much the Word of God as the word given through the Son. . . . The more direct revelation; the greater the impression of of the majesty of God, the greater is the transgression involved in disobedience.” (Geerhardus Vos, The Teaching of the Epistle to the Hebrews, p. 85).

Hebrews confronts you with the question: How will you escape if you neglect your great salvation? The Lord gave his Law in the context of the great act of redemption in the Old Testament—the exodus from Egypt. Then he spoke indirectly through angels. Now he has spoken directly in his Son. Notice that Hebrews does not deal with a possible objection—wasn’t revelation through the Son also indirect?-—because, as he has pointed out, the Son is truly God himself. He tells his readers and you that you have heard this revelation. Some had heard the teaching of Jesus directly during his earthly ministry. That word of salvation had been passed on by those who heard him to the author of Hebrews (which is an indication that the author is not Paul), and to you. You and I hear that message as we read the Word and hear it preached. The Lord spoke the good news of the kingdom just as he also established it by his life, death, and resurrection. He not only proclaimed salvation, he is salvation. Hebrews is warning you that if you reject Christ, escape is impossible. The alternative to Christ is not just exile, but eternal condemnation. If the revelation through angels held people accountable, how much more are you accountable, when you have heard Jesus speaking in his Word!

So, pay attention! Pay attention to what you have heard. “Therefore” in Hebrews 2:1 looks back to the previous chapter. Who Jesus is, what his role is in redemption—these are not abstract theological questions, but are crucial for you. Your view of who Christ is determines how our receive his gospel. It determines whether salvation is accomplished by what you do or by what Christ has done and is doing. Listen to Him! “This appeal to the glory of Christ lays the axe to the root of the tree of indifference, for a careless hearing of the gospel always stems from a failure to apprehend the unique majesty of the Mediator.” (Geoffrey B. Wilson, Hebrews: Hebrews: A Digest of Reformed Comment, p. 28).

Don’t drift away! Don’t lose your moorings. Like the original readers, you have a temptation to take Christ for granted. Don’t drift! Keep hold of him—that’s the repeated message of the book.

Pay attention to the good news that you have heard in Christ. Keep a firm hold on him.

“To spurn the hearing of the gospel is to disregard not only the preacher but God who is the source of the saving message. In the speaking of God to us by his Son, the Word become flesh (Jn. 1:14), word and action are perfectly united; and for the believer, who responds with faith and gratitude, this Word is not just a declaration heard with the outward ear, but an energy experienced in the very depth of his being, powerful in the transformation of his existence, and visible in his daily conduct. In view of the infinite grace of God manifested in the sending of his Son into the world to redeem fallen mankind we are under a moral obligation to give the most careful heed to the proclamation of the gospel.” (P. E. Hughes, A Commentary on the Epistle to the Hebrews, pp. 72-73).