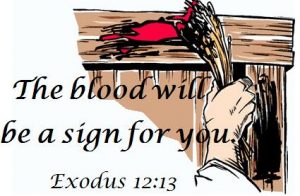 “Israel is my firstborn son, let my son go,” had been the Lord’s command to Pharaoh. He had refused, and the plagues began. As you come to Exodus 12, you find that this tenth plague is not just one more, like the others. It is not that this is just the last little bit that tips the scale for Pharaoh and persuades him to release Israel. Rather, it is a defining moment, not just for Israel, but for all of God’s people through the ages—including you.

You need the blood the Lord provides. Like Israel, you need atonement for your sins. Before the final plague, the slaying of the firstborn, the Lord instructed the people of Israel to select a year old male lamb without defect, kill it, and mark the door posts of the house with the blood. This is more than just an identifier of the homes of the Israelites so that the destroyer will pass over them. The lamb was a sacrifice. Israel, no less than Egypt, were sinners, deserving of God’s judgment. But God graciously provided a sacrifice in the place of the people. God was telling Israel—and you—that you are under his holy wrath, apart from the sacrifice he provides.

The Passover lamb points to the Lamb of God. The blood on the door frame was crucial—no deliverance without it, but it did not work mechanically or automatically. Hebrews 11:28 tells you that it was by faith that Moses and the Israelites sprinkled the blood and kept the Passover. But animal sacrifices alone were never enough, as even the believers in the Old Testament realized. Something better was needed. John the Baptist identified Jesus as the Lamb of God who takes away the sin of the world. Jesus took the occasion of the final Passover with his disciples, the night before his death, to change the observance to the first Lord’s Supper—pointing to and explaining his death. God is showing you that you are under his judgment until he provides the substitute who dies and rises in your place. 1 Corinthians 5:7 identifies Christ as the Passover lamb sacrificed in your place. The Passover was observed by families in their homes, but was also something for the entire nation. “The Passover is established as a communal act to be observed by families as a whole. It is not an individualistic ceremony. It is a family feast. . . . Sacrificial representation and substitution are already implied in this ceremonial meal.” (Keith A. Mathison, Given for You, pp. 182-183).

Trust God’s triumphant protection. The plague on the firstborn is terrible, but just judgment. You may shudder at the sweeping judgment—the firstborn son dying that night in the household of each Egyptian. Beware of setting your feelings as the standard by which God needs to operate. Remember that the Pharaohs had oppressed the Israelites, ordering the midwives to practice infanticide, and when that failed, carrying it out by throwing the baby boys into the Nile to drown. Pharaoh had been warned. He had hardened his heart repeatedly. As the destroyer came through the land, a loud mourning wail rose from Egypt.

The false gods are defeated. This is not just Pharaoh and Moses. This is the Lord doing battle for his people, defeating the idols of Egypt. Various gods were the associated with the previous plagues. But Pharaoh himself was considered divine. The next divine ruler of the land died that night—along with many others.

This event set God’s people free. That night the Egyptians beg the Israelites to leave, giving them valuable gifts to motivate them to go. This is the decisive event of redemption in the Old Testament. The calendar was changed to begin the year with this celebration. As God makes his covenant with his people at Sinai, he identifies himself as the God who redeemed them from Egypt. Repeatedly the prophets and the authors of Psalms point to this great event. There is not only forgiveness, there is powerful deliverance.

Continue to eat at the Lord’s Table. God treats Israel as family. The doorposts are marked with blood. The lamb has been sacrificed, atoning for the sin of the people, who are safely indoors, awaiting the moment to leave. But that is not enough. God gives detailed instructions for a meal. The lamb, along with bitter herbs and unleavened bread, is to be eaten. No bones of the lamb are broken, and it is entirely consumed at that meal, or any remainders burned in the fire. Why the focus on the meal that first night? God not only forgives and sets his people free, he has table fellowship with them. Remember what God had called Israel? His firstborn son. What do children do? They join the family meal. The Passover is not just this and that family having supper. It is the Lord inviting that family, and the entire family of Israel, to table fellowship. The detailed instructions for celebrating the meal annually make clear that the Lord continues to be with his people. “Time and again they would enjoy the privilege of having supper with the Lord at one table. How close God and His people would be! To this day that sign has never been abolished. Even now we have a supper in the church at which the Lord is host, where believers sit with Him at one table, namely, the Lord’s supper. We no longer eat lamb with unleavened bread and bitter herbs. Instead we eat bread that has been broken and drink wine that has been poured out, as signs of the broken body and shed blood of the Lord Jesus Christ. At this supper, God is as close to His own as He was to the Israelites.” (S. G. DeGraaf, Promise and Deliverance, Vol. 1, p. 274).

Your God invites you to table fellowship. The Lord continues to be as faithful to you as he was to Israel. Although the need to shed blood changes once the Savior, the One to whom those sacrifices had pointed, had suffered, died, and been raised, the fellowship continues, as you, by faith trust that Lamb. Jesus changes the celebration from Passover to the Lord’s Supper. Not every detail continued the same even in the Old Testament. The first Passover was eaten standing, dressed for a journey. Future observances seem not to have carried on those details. The unleavened bread symbolized the need for separation from sin, but yeast, in the New Testament, sometimes has that negative connotation, other times it is positive, Luke 13:20. But the New Testament celebration has in common with the Old that it is a fellowship meal to which our God invites us, his children, his people. It is not only a memorial, but it also is a means of grace. “In true religion there cannot be be a mere memorial feast. It recognizes nothing as absolutely past. In God Jehovah, the existing, the unchangeable, makes everything old new.” (E. W. Hengstenberg, The Kingdom of God in the Old Testament, Vol. 1, p. 278). It looks back at Christ’s finished work, but also ahead to the heavenly banquet feast. In fact it is a foretaste of that feast.

The Lord’s Supper means that because God has sent his Son to be the Lamb that was slain, you who trust him are no longer his enemy. He invites you to table fellowship, to an anticipation of the banquet in the new heavens and earth.