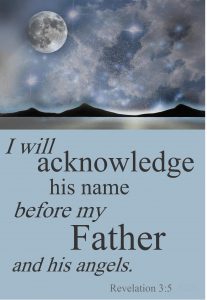 Beware of having only a name. The one who holds the seven Spirits of God knows you. Jesus holds the seven Spirits of God. John is not confused about the personality of the Holy Spirit. Rather, this is a way, with good biblical precedent, of describing the fullness of the third person of the Trinity, see Zechariah 4: 6, 10; Revelation 1:4 and 4:5. Picking up the description of Christ from the first chapter, he also holds the seven stars in his hand. He knows the church far better than the church at Sardis knows itself. Remember that he knows you and me better than we know ourselves. “Jesus calls himself ‘he who has the seven spirits of God and the seven stars’ (Rev. 3:1). The seven Spirits are God’s one Spirit, who is limitless, knowing all, present everywhere, and almighty. In Revelation 5 John will see the Spirit symbolized by by the Lamb’s seven eyes, which “are the seven Spirits of God sent out into all the earth” 5:6; cf. Zech. 3:9; 4:10). The Son of Man who sees his churches also holds their identity (stars/angels) securely in his hand. This church has underrated Jesus’ present knowledge and therefore faces a shocking awakening at his coming.” (Dennis E. Johnson, Triumph of the Lamb, p. 84).

Jesus knows that a name for being alive can be only reputation. The city of Sardis had a reputation. It had a name for wealth. Some strands of mythology associated King Midas with the area. A historical king was Croesus, whose name was a byword for wealth. But the supposedly unassailable acropolis was seized in 549 B.C., as Persian soldiers climbed a cliff that was deemed impossible to climb. The church in that city had reputation for being alive, but that was in name only. Notice that there is no mention of persecution or martyrdom, no Balaam-like prophets or Jezebel-like prophetesses, luring into idolatry and sexual immorality. Instead, it is a church that is complacent, resting on its reputation, having a name for living, but actually being dead. They may even deceive themselves, but the Lord, working hand in hand with the seven-fold Spirit, knows the church better than she knows herself. That complacency is a danger, not only to the church as a whole, but to each of us as members. Without falling into flagrant immorality, without embracing explicit heresy, we can coast along until one is hard pressed to see any difference between us and the world.

To a church like that, and to us, if we fall into that kind of lethargy, Jesus has a one word warning: “Repent!” The Lord who sees behind a name will not tolerate this kind of grotesque living death. He will come in judgment. The coming in the night language picks up on statements of Jesus during his earthly ministry, as he warned his hearers to be prepared for his final coming in judgment. Whether that final coming is in view, or a more immediate judgment (remember the church at Corinth suffered consequences for its abuse of the Lord’s Supper), both can be unexpected, and the preliminary anticipates the final judgment. Joel addressed a nation that was confident of its own position before God, and wanted the day of the Lord to come upon the ungodly lands around them. Joel warns that the judgment of that day will be far more sweeping than they expect, and summons them to repent. It is in the context of that Day of the Lord and the call to repentance that he then prophesies the pouring out of the Holy Spirit, as Peter points out in Acts 2. Repentance, and entrusting yourself to Christ, are things that happen, not just at the beginning of the Christian life, but need to be a daily part of it—if you are alive.

Trust in Christ who acknowledges your name. Keep your clothes unsoiled. The news is not all bad. There are some, a few, who have not polluted their garments. Leviticus 13:47ff has provisions for the examination of clothing that had been contaminated by mildew, leading either to cleansing or destruction of the item. God was giving his people a practical, graphic illustration of the polluting power of sin. Those who belong to Jesus must be holy because their Lord is holy. To quote Mark Jones, Jesus is more concerned about your sanctification than you are. White garments reflect God’s justifying work, Zechariah 3; Revelation 7:14, but also are identified as the “righteous acts of the saints (Revelation 19:6-8).

Walk with Christ, dressed in white. Where there is real life, and not just a false memory of it, Jesus walks with his people. He dresses them in white, he has fellowship with them and they with him. For the church and for us as its members, the key is fellowship and communion with Christ. “The essence of a church is not its programs, buildings, past achievements, reputation, institutional greatness, or formal doctrinal correctness, but its spiritual life. This life comes only through fellowship with the living Christ, and is demonstrated through the seriousness of repentance and obedience.” (Vern S. Poythress, The Returning King, p. 90).

A name can be an empty reputation. Or, it can be what the living Christ uses to acknowledge you before his Father and the angels of heaven. Which is it for you?