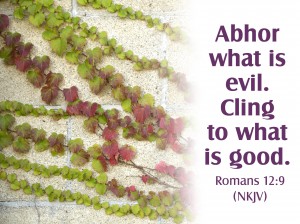 Using a device he called “diabolical ventriloquism” C. S. Lewis wrote The Screwtape Letters, showing from the perspective of demons, how human beings can be attacked. Even the church can be used by them to try to drive a wedge between the believer and the Lord. “When he [the “patient,’ the human being tempted] gets to his pew and looks round him he sees just that selection of his neighbours whom he has hitherto avoided. . . . Provided that any of those neighbours sing out of tune, or have boots that squeak, or double chins, or odd clothes, the patient will quite easily believe that their religion must therefore be somehow ridiculous.” Paul, in Romans 12:9-13, points you to the attitudes and actions that should characterize those who are in Christ. Here is something that builds up one another, rather than tears down, something that strengthens faith rather than undermining it.

Love must be genuine, or unmasked. In classical Greek drama actors spoke through masks representing their character. Thus, hypocrisy is “through a mask.” That cannot characterize your love. However, beware of the contemporary attitude that attempts to justify rebellion against God by saying, “What you see is what you get. At least I’m not a hypocrite.” Making sin blatant does not justify it!

Because God is the holy God he is, there are absolute standards of good and evil in our world. Utterly hate the evil; hold fast, cleave, to use an old fashioned word, to the good. As John Murray wrote: “When the good is the atmosphere of our life we suffocate in the paths of iniquity and the counsels of the ungodly.”

To touch lightly on the specifics that Paul includes under the heading of the command to love with an unmasked love:

Love one another with a deep brotherly love. The close relationships of good family life need to be reflected in dealing with brothers and sisters in Christ. If you are going to compete, make it in showing honor to one another. Be on guard against allowing laziness to blunt the zeal you once had in serving God. The three items of v. 12, rejoicing in hope, patiently enduring suffering, and praying consistently all hang together. Paul is not just talking about attitudes. The love he describes has hands and feet as it provides for the needs of believers and extends hospitality.

From where does this kind of genuine love come? In the middle of the series of imperatives is a command to be fervent in the Spirit (probably a better way of understanding the expression, though it could refer to a fervency of the human spirit). Remember how Paul, earlier in the letter, has written of the powerful working in the life of the believer of the Spirit who was involved in raising Christ from the dead. As you turn from your sins and are united to Christ by faith, that Spirit begins to make you into the person that you will be for all eternity in fellowship with the Lord.

Avoid the danger of uncharted, undirected zeal by remembering that the Spirit and the Lord always work together. Zeal in the Spirit, looked at from a slightly different perspective, is serving the Lord, who said, “If you love me, keep my commandments.”

The focus on the Spirit and the Lord keep this series of instructions from becoming a list of resolutions at which you work in a well intentioned way. You need more than intentions. You need a living relationship with your Savior! Only that leads to genuine love.