Lord of the Dead and the Living 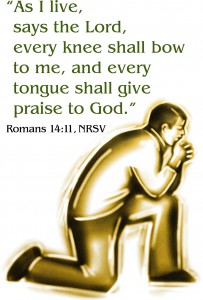 “It’s all about me” says your culture. But Paul has reminded you that whether you live or whether you die, you are the Lord’s. In Romans 14:9-12 he connects Christ’s lordship with his dying and living.

You might expect the reverse order: Christ lived here on earth as the Messiah, then died for my sins. But Paul’s focus is on the death of Christ and on the life that flows out of the resurrection of the Redeemer. Because he entered the realm of the dead– and emerged triumphant–he established his supremacy over this realm. His lordship here assures you that even when your life comes to an end you do not escape his loving care. Christ is Lord of the living. After he died for your sins, he lived! His Lordship extends to every area of your life, including your attitude towards fellow believers and their practices.

John Calvin comments: “Christ claims this power over us, since he has obtained it by so great a price; for by undergoing death for our salvation, he has acquired authority over us which cannot be destroyed by death, and by rising again, he has received our whole life as his peculiar property. He has then by his death and resurrection deserved that we should, in death as well as in life, advance the glory of his name.”

Paul uses the language of Isaiah 45:23 to indicate the certainty and the sweep of Christ’s universal reign. You cannot exclude any area of your life from his rule. Every knee bowing points to the final judgment, to the day when, as Paul says, “each of us will give an account of himself to God.” Believers, as well as unbelievers, will stand before God in the last day.

Although you are never saved on the basis of your works (the gospel hangs or falls on that distinction), your works do enter into judgment because the God who justifies you also sanctifies you. You cannot separate the two. Because of God’s work in you he can say to you in that day: “Well done, good and faithful servant.”

One Response to Lord of the Dead and the Living