Live to the Lord 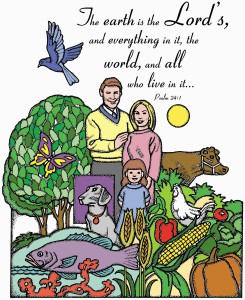 As you look at the issue of Christian liberty, the appropriate place to start is at the beginning! In the creation account in Genesis 1 six different times God pronounces what he has made “good.” Then in Genesis 1:31 God, after surveying his entire creation, declares it “very good.”

Genesis 3, of course, goes on to describe the Fall. Notice, however, that although the Fall had a negative impact on the creation, the problem is man’s sin. It is not that the creation, the things around us, have become evil. Rather, mankind, in his rebellion, abuses the creation for his own purposes rather than using it for the glory of God. David celebrates the goodness of God’s creation in Psalm 24:1: “The earth is the Lord’s and everything in it, the world , and all who live in it” (NIV). Paul quotes that verse in 1 Corinthians 10:26 in the context of teaching the Corinthians that sin does not lie in things, not even in meat offered to idols.

That’s an important concept to keep in mind, even though the church has not always remembered it as clearly as it should. Greek philosophy, with its notion that the immaterial was of a higher order than the physical had an impact on the thinking of the church. We also have a built-in motivation for looking at things as sinful. If sin lies in something outside of me, I consider myself less responsible. Instead of being convicted of the sin of drunkenness, I am tempted to blame “demon rum.”

In Romans 14:1–15:7 Paul deals with the important issue of Christian liberty. In the first part of that section (Romans 14:1-8) he writes about using or abstaining from food – but his basic concerns are how believers treat one another and whether they are honoring the Lord. Some Christians at Rome were vegetarians, some ate meat. Some observed Old Testament feast days, others treated every day alike, v.5. (While the Fourth Commandment requires that we keep the Sabbath holy, some people observed other special days as well.) Practice among Christians today as to things they use and those from which they abstain varies. Things in themselves are not right or wrong. How they are used is what matters. The Westminster Confession of Faith, 20:2 is worth reviewing as a good summary of Biblical teaching on this matter.

John Murray writes: “The Lordship of Christ is never suspended. The believer is never in a situation that is neutral or indifferent and so he must ever live in the recognition of Christ’s lordship and act in the intelligent and fully-persuaded consciousness of devotion to him.” “The Weak and the Strong” in Collected Writings, Vol. 4, p. 156.

Christ is your Lord because he died and lived. Paul focuses, not on his eternal lordship as the Son of God, the Creator, but on the lordship which he earned as the Messiah who suffered, died, and rose in your place, cf. Acts 2:36; Romans 1:3,4. Your belonging to your Lord is the direct result of his Messianic work in your place. Because he is Lord, nothing that you do is morally indifferent. Whether you eat or drink, you must do it to his glory. As Lord, Christ is the final judge. Thus you are not to judge your brother. Instead, live to the Lord.