Jesus Glorified by the Holy Spirit 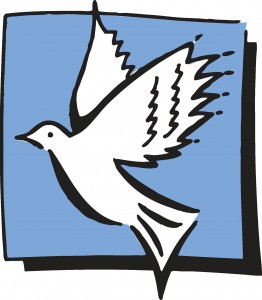 Jesus, the good teacher that he is, uses repetition to bring his disciples (and us) to understand what he is saying. As we near the end of the high priestly discourse, Jesus, in John 15:4-16, again explains the work of the Holy Spirit.

Although you may not often think of it that way, the Spirit, who is the Helper, who comes alongside to aid, the Counselor (in the sense of a defense attorney), is also a prosecutor. He would come, Jesus said, to convict the world of three things.

Repent, because the Spirit convicts of sin. You and I, together with the rest of the world, stand guilty before God. But it is the Spirit who brings that home, who cuts through the excuses that we make, who convicts us of our sin and enables us to recognize that we need Jesus as our Savior. He convicts of sin, and in particular the sin of unbelief. Has he convicted you of your sin?

Believe, because the Spirit convicts of righteousness. Jesus ties that with his own going to his Father. Righteousness here is the righteousness of the risen, ascended, and glorified Son of God. His going to the Father is his vindication. The One who was made sin for you has been declared “not guilty.” And as the Spirit unites you to Jesus, that is your verdict as well. Has the Holy Spirit worked in your heart the assurance that your only hope is the righteousness of Jesus Christ that comes to you as the Spirit gives you a new heart and makes you a new creature, uniting you to Jesus Christ by faith?

Rejoice, because the prince of this world stands condemned. In the events of the next few hours as the Son of Man would be unjustly condemned, nailed to a cross, and subjected to the death of a despised criminal it might appear that the prince of this world, Satan, who deceives and corrupts, had conquered. The age old conflict between the seed of the woman and the seed of the serpent would seem to have been resolved in favor of the latter. The disciples would flee, and I suspect that if we had been able to be there, we would have as well.

Jesus had pointed out earlier (John 12:31) that the completion of his messianic work meant judgment for the prince of this world. It means judgment for all who follow the evil one. But for you into whom the Spirit has breathed new life, the enslaving power of Satan has been broken. You have been set free to serve your Lord. You are a new creation! The coming of the Spirit at Pentecost changed a rag tag group of followers of Jesus into bold, powerful proclaimers of his kingdom. Do you experience something of that boldness in serving the ascended Lord, who is present by his Spirit?

Jesus not only repeats, he understands the capacity of his disciples. He has much more to tell them, but they are not at a point at which they can take it in, John 16:12. His time is limited, but he will send the Spirit of truth, who will guide the disciples into all truth.

The guiding into all truth is directed first of all and primarily to the apostles, the ones whom God would use to write the Scriptures. Beware of those who begin an discussion about the Bible with “Well, God told me. . .”! The Word is the primary means by which the Spirit does his work as the great convict-er. Secondarily, and directly to you and me, the Spirit enlightens our minds and hearts, convincing us of the truth of the Word, applying it to us, and drawing us to Christ. That Spirit works gently. He guides not drives us to the truth.

The Spirit focuses on Christ. Just as a good tour guide ought to leave you marveling, not at the education or background of the guide, but at the marvels of what you have seen, so the Spirit guides you to Christ. Isaiah 11 described the coming Messiah as Spirit equipped. The Spirit takes the things of Christ and makes them known to you through the Word. “He [the Spirit] takes ‘what is mine,’ bringing forth the treasure entrusted to Jesus, in order to redistribute it in his own way, ‘bringing to remembrance’ (cf. 14:26), and thus is the permanent mediator between Jesus and those belonging to Jesus.” (Herman Ridderbos, The Gospel of John: A Theological Commentary, p. 536).

What need do you have? The Spirit meets it by taking you to Christ, by taking the things of Christ to you. Are you convicted of the guilt of your sin? The Spirit is the one who is powerfully involved in raising Christ from the dead as the justified one, justified not just for himself, but for you. Are you struggling with growing in obeying God? What is the fruit of the Spirit? The fruit of the Spirit is Christ living in you and you living out of Christ—by the Spirit he has poured out on the church. Are you discouraged or grieving? The Spirit brings the gentle Savior to you.

Notice how the three persons of the Trinity work together. Jesus is sending the Spirit, who will take the things of Christ and make them known to the disciples, to the church. And what are the things of Jesus? All that the Father has is his.